It is one big happy family now.

On Thursday, the Canadian Soccer Association reached agreement with the coach of the women's national team, Carolina Morace, extending her commitment through the 2012 Olympics, with a real possibility that she will still be around when Canada plays host to the Women's World Cup in 2015. (Morace is also the coach of Canada under-20 women's side.) "Now we are on the same page," Morace said.

Thus ends what had become an uncomfortable and, in many ways, difficult-to-decipher dispute between a coach who seems to have Canada poised for a breakthrough result at the coming World Cup and an association from which she had become estranged.

In February, Morace announced that she would be walking away after Germany 2011 because of what she vaguely described as a lack of support, and her players immediately threatened to boycott matches to back her up.

After that, the boycott threats were revoked, the public dispute went private, and the women's team went back to the business of preparing for a tournament in which they may be poised for a historic breakthrough. (They are currently in the middle of a final training camp in Italy.) Truth is, that wasn't the worst dynamic - at least in the short term.

There's no question that the players on this Canadian side, led by Christine Sinclair, who right now is among the very best female players on earth, stood foursquare behind Morace, who has transformed the approach of this side from the long-ball, power game favoured by her predecessor, Even Pellerud, into a more technical, possession and finesse-oriented style.

To get there, Morace stripped things right down to the foundations, forcing her players to relearn basic skills, and to rethink their approach to the game. Rather than rebelling, they bought in, and seem overjoyed to be playing the game the way it is meant to be played.

Us-against-them - even if them is your own association - can be a powerful team-building force, and there's no doubt that this group was willing to rally around its coach.

But now, they can do that understanding that Morace has also been given what she wanted.

And just what was that?

No one on the CSA side is willing to say exactly, other than that it does not involved extra financial compensation for the coach, or for the players.

"We had meaningful dialogue to assure her that she had the tools in place in order to be successful," CSA general secretary Peter Montopoli said. "It's a mater of her feeling comfortable in terms of how the program is progressing."

Translation: One of the greatest obstacles to success for Canadian soccer teams on both the men's and women's side is that players tend to be scattered all over the world, in a variety of leagues.

What Morace appears to have received is a commitment to maintain a training base in Europe where the team can come together at regular intervals, and enough money to stage a series of exhibition matches between major competitions. The Canadian women have played 16 times (though almost never at home) since last November in the lead-up to the World Cup, and now that kind of schedule can now be expected to continue.

The bad feelings are water under the bridge. The coach is happy. The players are happy. The CSA is relieved. And with two huge competitions this summer and next, and what figures to be a watershed moment for the game in Canada coming in 2015, that ought to add up to the best chance a Canadian soccer team has ever had for true international success.

So no asterisks now, no intrigues, no lingering tensions, no distractions, and no excuses.

On to Germany, clear sailing. 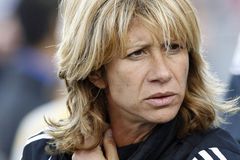