What role she will play on the field remains to be seen, however.

The 166-cap veteran, whose work ethic and passing help Canada unlock defences, tore her anterior cruciate ligament in a 3-0 friendly loss to Japan. She has been seen with crutches in recent days after injuring a foot during her rehab.

Matheson walked gingerly down the stairs at Monday's announcement, taking a shorter route than her teammates.

Head coach John Herdman, calling Matheson "one of the best Canadians I've met," said the compact midfielder can make a difference whether she plays or not.

"Her health won't impact the leadership role she has off the pitch," he told a news conference.

"Our goal is to have her back playing in that tournament," he added. "And she's very clear that if there was ever a chance that she wouldn't be able to play, I know from her perspective she wouldn't have taken a (Canadian) shirt.

"And if there's ever a chance she won't play, there's always the (roster) rule of 24 hours before the Women's World Cup starts that Diana can hand that shirt over to someone that can. But either way, we'll have Diana Matheson in and around our environment, because she's got an X factor that can push us on the podium."

The 31-year-old native of Oakville, Ont., is no stranger to comebacks.

Matheson, who stands just a half-inch over five feet, had knee surgery to repair torn cartilage in her right knee in November 2011. The recovery time was longer than expected but she recovered to play in the 2012 Olympics, scoring the stoppage-time goal that beat France in the bronze-medal match.

Defender Lauren Sesselmann, who tore up her knee in February 2014, has already returned to action and is also on the roster.

Talismanic forward Christine Sinclair, with 222 caps and 153 international goals, will again serve as captain. The 31-year-old from Burnaby, B.C., is one of six players on the squad with more than 100 national team appearances.

They form the spine of a team that went from dead last at the 2011 World Cup to the medal podium at the 2012 Olympics in London.

The made-for-TV roster announcement took place in the rain at downtown Vancouver's Robson Square against a backdrop of screaming, flag-waving young girls. Arm in arm, the Canadian team sang "O Canada" to end the ceremony.

With 25 players including Matheson in residency, there were not many roster decisions to make.

Janine Beckie, a 20-year-old forward with five caps, and Rebecca Quinn, a 19-year-old defender with nine caps, will likely be part of a group of some six alternates on standby.

They could see action. Defenders Marie-Eve Nault played an important role after being called in when Robyn Gayle and Emily Zurrer were injured at the Olympics. All three are on the World Cup squad.

Only one player — 28-year-old midfielder Selenia Iacchelli — has less than 10 caps (with four appearances).

Thirteen of the 23 players chosen are 28 or older, with nine in their 30s.

But despite that experience, goals have been hard to come by at times.

Eighth-ranked Canada was beaten 1-0 by No. 3 France and No. 6 England in its last two outings. And the Canadian women have scored one goal or less in nine of their last 15 matches, during which time they went 8-5-2 with all five losses coming to Tier 1 opposition — although they did tie the U.S. and tie and beat Sweden during that stretch.

Young talent includes 17-year-old Jessie Fleming, a midfielder with exquisite touch, and 19-year-old Kadeisha Buchanan, a hard-nosed centre back. Both are expected to play key roles this summer.

Canada, playing out of Group A, plays June 6 against No. 16 China and June 11 against No. 17 New Zealand in Edmonton, before travelling to Montreal to face the 12th-ranked Netherlands on June 15.

Now that the roster has been announced, the Canadian women can now look forward to 10 days off — their last break until their World Cup campaign ends.

They will reconvene May 7 for a week in California, where they will have a training match with the U.S., before heading to Mexico for a week.

They return to the Toronto area May 21 to prepare for their final friendly on May 29 against England in Hamilton.

The 24-team World Cup, which wraps up July 5 in Vancouver, will also see games in Winnipeg, Ottawa and Moncton. 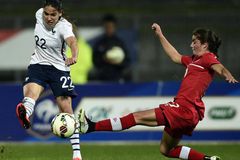 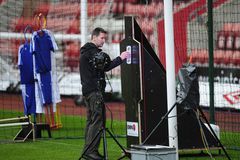 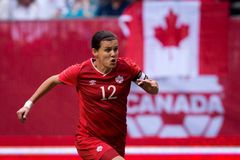