Here in Warsaw all the talk is of Poland. Naturally. Wednesday night's main news on Polish TV was devoted entirely to the Euro tournament. And I do mean, entirely. Not a word about any other news story. Nothing else happened.

And that entirety amounted to news about Poland's team and the experience of watching Poland. No, not news about the riot in Warsaw before the game against Russia. Yes, some punditry about that that massive "This is Russia" banner impressively unveiled by Russia's supporters and how insulting it was to Poles. The depicted figure on the banner was Dmitry Pozharsky, who, apparently, stopped a Polish invasion of Russia in the 17th century, and, well, Poles found that unduly provocative.

That attitude is expected. A certainty in a host country. Pride. Ostentatious outrage at insults. It's spin, and bound to happen.

There are fewer certainties in the actual game of soccer being played here, but a good bet in soccer is an outbreak of the Dutch disease. It's almost as certain as Poland's peevishness with Russian arrogance.

Back to the news on TV here. Another predictable element emerged. That is, a lengthy report, a total favourite of TV news in such circumstances – the news that watching the national team in a tournament is dangerous for your health. Psychologists, doctors and paramedics were interviewed. A man whose heart rate was monitored during the game against Russia was interviewed, his heart rate shown on TV. The ups, the downs. Without understanding much Polish, the message was obvious – watching the soccer can kill you.

This brings us to the the appropriately named Group of Death.

It has lived up to its name. Wednesday's games, Portugal's late and dramatic win over the formidable Denmark and Germany's triumph over a shockingly ineffectual Netherlands might be the two best games of what has been a fabulous tournament so far.

There is an exquisite pitch to the Euro schedule. Sixteen teams. Three weeks of play. Game after game without much delay. Ruthlessness is required. Right now, Germany is the one team with that required trait. And yet, as anyone cognizant of the Group B situation knows, nothing is absolutely certain yet. It is not yet settled that Germany automatically qualifies for the quarter-finals. Mathematically, this group is so finely poised that a combination of results and goals on Sunday could yet see Denmark and the Dutch advance.

But a Dutch recovery beggars plausibility. And the strangeness of the team's feebleness makes the Group of Death the group of ceaseless curiosity.

The Dutch "disease" is disharmony. In tournament after tournament, going back the decades, the Dutch team splinters into small groups and blame is sprayed around. Anyone wondering why the Netherlands has failed to gain even a single point from two games need only examine what Dutch players are saying publicly. Wesley Sneijder used a newspaper interview to talk about what is translated as the "pathetic egos" of some of his teammates.

Meanwhile, Rafael van der Vaart, expected by many to be the next superstar to emerge from the Dutch team, has been shockingly public with his petulance about not starting games for the Netherlands. In most circumstances, a member of a national team would never criticize a team manger while a tournament is under way. But van der Vaart has declared "I am very disappointed" with manager Bert van Marwijk's decision not to include him in the starting team for the game against Denmark.

For all its skills, the Dutch team tends toward schisms and internal suspicions. The result, once again, is bizarre.

After losing two games, the disease that has struck the Dutch team has turned the Group of Death on its head. Germany only needs a point – a draw with Denmark – to reach the last eight. But the Netherlands needs to beat Portugal on Sunday, and hope that Germany beats Denmark while securing a better goal difference than Portugal and the Danes.

Complicated? Well, Poland's pride and resentments have a complicated back story. And the math of Group B is a tad complex. But what's happening to the Dutch team transcends complexity. And it has delivered a self-inflicted death-blow. 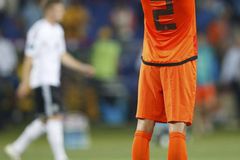 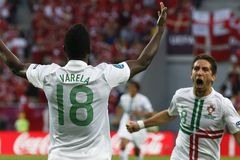