Hard and soft. Those are the key adjectives. A hard-fought win for England on the back of a goal by Wayne Rooney, one of the easiest he will ever score.

But a 1-0 win in Ukraine is nothing. England's real opportunity awaits it in the Sunday's quarter-final match against Italy. An opportunity to reposition England and English soccer. A chance to endorse old-fashioned soccer as England's game and gloriously so. Old-fashioned as in defensive-minded, determined and rooted in the fast counter-attack, the long ball to a big defender in the penalty area.

A rebuke to the possession-game that has come to dominate European soccer at club level. A win for the hard-man's game over the softly-softly sweetness of the slow build-up and immaculate technique.

England's national team and its English game have allure again. Here in Warsaw the locals were cheering for England. For a start, it's a co-host thing. Nothing delights Poles as much as a swipe at Ukraine from a visitor to the Euro who has been to Ukraine and found it wanting.

Ukraine is not as organized, efficient or welcoming as Poland. Say that to a Pole and you've made a friend. A small but attendant detail was anguish over the possibility that that Ukraine might progress beyond the first round while Poland did not.

They know the English here and in Ukraine. All those English Premier League superstars whose weekly toil is transmitted to countless countries. People beyond the United Kingdom might well watch mainly to see a Pole play for Arsenal or savour a Champions League game featuring a Ukrainian playing on a German club team against an EPL team. Few English players ever play in the big European leagues but their proximity to European stars on club teams makes them familiar. Rooney. Steven Gerrard. John Terry.

That trio capture the English game in the European imagination and they delivered the expected against Ukraine. Grit and ardour.

Ukraine bossed the game for 30 minutes but only fanatically, failing to get a shot directly on target. England defended deeply and frantically at times. Unlovely to watch, the game was vintage England tactics distilled – two lines of four defenders stopping and blocking relentlessly, successfully forcing Ukraine to attempt long-range shots, mostly from outside the penalty area. England was poor in attack and perversely solid in defence. It turned out that Wayne Rooney – well-coiffed for the occasion but looking rusty after a long layoff – was not going to instantly dominate this tournament in a late cameo appearance.

At half-time it seemed clear what England needed – Andy Carroll. A tall man in the box to aim at on quick counter-attacks. Weirdly, it turned out that Rooney played the Carroll role. Very much against the run of play, England gained a corner, Gerrard's hard ball into box came back to him and he sent a low, high velocity cross back. It was deflected, spun weirdly, bounced past a grasping Ukraine keeper and bounced up to Rooney, who merely had to nod it into the net.

That was hard on Ukraine, but harder was to come. A wonderfully orchestrated move led to Marko Devic shooting past England keeper Joe Hart and the ball was fractionally but clearly over the goal-line when Terry scooped it back. Yet the goal-line assistant – specifically charged with goal-line decisions – denied Ukraine a goal.

Those are the small details of a controversy that in the end mattered little. Given Sweden's victory over France, England place in the quarter-finals was secure and Ukraine was eliminated.

But the big picture, for England, is immense. A vista is outspread before it, for this team of mediocrity and fetishized traditional tactics.

This is a key period for English soccer. The national team failed to even qualify for Euro 2008. It was hopeless and whiny at World Cup 2010 in South Africa. England's main club teams are, increasingly, the playthings of billionaires from other countries who can afford to play a whimsical game of fantasy soccer, plucking the best players from across the world to upgrade an old-fashioned brand.

The pure English game, played by Englishmen coached by an Englishman and relying on English pluck and perseverance is a truly isolated phenomenon, marginal in Europe. Considered tactically naive and trite. Now the vista is, tantalizingly, one of triumph for this traditional game. The sort of game that allowed for Andy Carroll and Wayne Rooney to play together as a combined strike force in the late stages against Ukraine. Together they looked and moved like villains in a lame, late episode of Miami Vice – retro.

Hard to believe England got this far with this team. Soft-headed to believe this can't go further. England is three games away from tearing European soccer apart and backward. 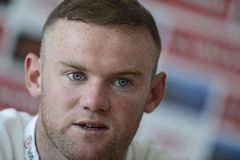