After his playoff heroics, Jozy Altidore may never have to buy a drink again in Toronto.

It's a theory that may already have been tested, judging from his woozy performance at Toronto FC's victory parade on Monday.

"I just want to let you guys know that I've been partying since Saturday," Altidore, clearly feeling no pain, said when it was his time to address the crowd. "And baby, I'm TFC till I die," he added before dropping the microphone and starting an impromptu dance with his teammates.

After mixed success playing abroad, the 28-year-old U.S. international has found his happy place in Toronto.

While it was likely a good thing the MLS Cup MVP was not operating heavy machinery, it was hard not to feel his joy at celebrating the championship win with his adopted city.

It was a far cry from last Thursday, when a taciturn Altidore seemed as if he had only brought a dozen words or so with him to a pre-MLS Cup news conference.

Away from the spotlight, Altidore will turn on his megawatt smile. But he clearly is no fan of being in the limelight.

If he can skip the media side of the job, so much the better. And reporters covering TFC have learned that while Altidore is happy to talk up teammates, he has no interest in discussing his own exploits.

But in recent weeks, Altidore has opened up about how he has grown to love Toronto and its fans.

"It's no secret personally before I came to Toronto, my life was in a lot of ways not great," he told reporters in his end-of-season availability this week.

"A lot of that comes down to me, growing up as a young kid, just learning how to be a man.

"But this place took me in and made me a man. Toronto made me a man. It helped me in so many ways that you guys will probably never know. So I'm eternally grateful to this city and I hope it's a relationship that doesn't end any time soon."

Altidore joined Toronto in January, 2015, after a disappointing 18-month stint with Sunderland, with England striker Jermain Defoe going the other way.

Strong as a bull, Altidore can outmuscle most defenders. But he also has a deft touch, allowing him to connect with teammates.

Despite those skills, Altidore's time at Sunderland did not go as planned. He scored just once in 42 Premier League appearances (three goals in 52 appearances in all competitions).

And he heard all about it.

The MLS Cup win was a chance to answer some of his critics, while fulfilling dreams discussed over "hours and hours" with TFC captain Michael Bradley, who helped convince Altidore to take a chance on Toronto.

"We've been on the field on so many big days together – good days, bad days," Bradley said. "And as I said after the [MLS Cup final], when push comes to shove he's a guy that I want by my side every step of the way."

Altidore's immediate future involves spending time with his family. His sister is getting married on Saturday.

"Then getting ready for next year," he said. "If anything makes you hungry, it's winning and having that kind of reception from the city. It just makes you want to have it again." 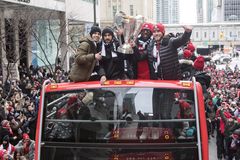 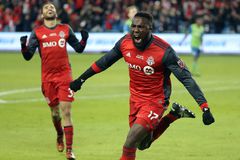