Good morning from Gdansk, where it rains steadily and a few hundreds Greeks, all based in Germany, it seems, wander the old city shivering and wet.

I'm here for the Germany v Greece quarter-final. The match that's all about the money. The match where "Euro" means the currency, not the soccer.

This is not an overstatement. Pretty much all of Greece loathes Germany because Chancellor Angela Merkel, boss of the Euro Zone, has no patience with complaints about austerity measures in Greece, seeing as German taxpayers are paying the bill for Greece's huge, billions-of-Euros bailout packages.

And guess who's coming here? Angela Merkel herself, well known soccer fan (her favourite player is Sebastien Svcheiny) and the most loathed European in Greece. Merkel will attend the game, having reportedly pushed around Italian, Spanish and French officials about the timing of an urgent meeting about the Euro crisis, to attend here. First the football, then the finance. She, like most Germans, presumably, would like to see pesky Greece crushed.

The German mass-market paper Bild previewed the game with this slogan: "For 90 minutes it will be about more than just football. The Euro crisis will be playing too. Rejoice, dear Greeks, defeat will be for free on Friday! No bailout will help you against Joachim Loew!"

Another paper, the Berliner Kurier carried a cartoon on Tuesday of a German spokesman telling a press conference, "Our stance on Greece remaining in the Eurozone depends entirely upon how the quarter-final goes."

Madly looking for metaphors, the Germans, but they're serious. And money is a serious ingredient in this Euro tournament. Now that Poland is no longer playing in it, the matter at hand is making enough money from visitors to ease the national psyche.

In Warsaw in the last few days there was an "Are you still here?" look from locals as journalists and fans traipsed the streets. But in the shops, restaurants and hotels, the soccer is seen now as a cash-machine. As the co-host country bows out, it's notable that many seats at games are filled by the sponsors and commercial partners of UEFA's Euro 2012 extravaganza. Bus loads of people on Sharp or Carlsberg's dime arrive at the stadiums and occupy hotels and bars.

And then there's the game. German manager Loew paid the Greek team the highest of German compliments yesterday when he called the players "masters of efficiency". Would that Merkel could say the same about the Greek economy.

Loew was warning that an expected German victory might not be as easily achieved as supporters expect. It's true that Giorgos Karagounis, the Greece captain, is suspended for tonight's game and his absence is bound to be fellt. But Greece qualified easily, held Poland to a tie and dispatched Russia with surprising ease. Their formidable defensive discipline can stifle any team and Greece's ability to quickly counter-attack or score from set-pieces got it this far. It will not be intimidated.

Germany will not panic, though, if the game proves tough. German stars Mario Gomez, Thomas Muller, Mesut Ozil and Lukas Podolski have all shown at this Euro that they are not in search of Cristano Ronaldo-like solo attention, but in steady teamwork to solidify a win. 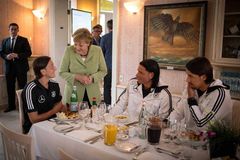 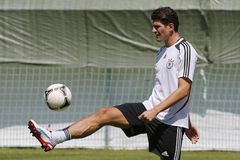