Karina LeBlanc remembers playing in front of empty stands, so the well-attended stadium love-ins that embraced the Canadian team at the Women's World Cup were something special.

"When I first started, it used to be I could count on my hand how many people were are the game and it was usually friends and family," the veteran goalkeeper recalled. "Now to have screaming kids – just the other day I had a 40-year-old man walk up to me and he was in tears. He said, 'You guys just make me so proud to be Canadian.'"

With the World Cup over, the job now is to build on the success of the tournament and grow women's soccer.

Dan Levy, a North Carolina-based player agent with Wasserman Media Group, had high hopes for this World Cup. As he expected, the U.S. rallied behind its team while Canada embraced the home side. But he said the depth of interest in the entire tournament took him by surprise.

He believes the Canadian competition, from its fine play to good sportsmanship, won over many people.

"I do think that the level of play, sophistication in tactics, obviously their technical abilities, is stronger than ever. And that bodes well for the future, it really does."

Matthew Buck, director of player management for the Professional Footballers' Association that represents the English team collectively and about half the World Cup roster individually, said England's trip deep into the tournament was reflected back home by the increase in media requests for female pros who weren't part of the England team.

And with the Olympics only a year away, women's soccer can look forward to another high-profile tournament around the corner.

"Big events do provide a unique platform that others can't … Fans gravitate towards great games, great players. They want to be inspired," said Levy, whose company has deep soccer roots.

South of the border, Fox smashed records with its coverage of the U.S.-Japan final (25.4 million viewers), erasing the previous U.S. soccer mark of 18.22 million for the U.S.-Portugal matchup at last year's men's World Cup.

And the Fox numbers were positive across the board.

"They're really pleased with how things have gone and I think that's a testament to people caring about the event," said Levy. "I think it's still hard, whether it's this country or abroad, to sustain it week in and week out, certainly at the level we're used to on the men's side.

"But it does show that countries and fans will rally round big events. And that's exciting because that hasn't always been the case for the women."

The women's game has a lot going for it.

Simulation, which is a plague on the men's side, is far less prevalent among the women who just seem to get on with the game.

And fans love them.

"They set a great example and many many women have followed in their footsteps, not just Americans," he said.

Certainly the outpouring of affection from spectators for all the teams at the World Cup was remarkable.

"I think the players feel more real to them, they're more approachable," Levy said. "When was the last time you saw players from the EPL [English Premier League] sign autographs after a game?"

Women still don't get rich playing soccer. Canadians do better than most, however.

The lucky ones got carding money from Sport Canada, a contract from the Canadian Soccer Association to play in the National Women's Soccer League and undisclosed World Cup compensation from their national governing body.

The even luckier ones, such as captain Christine Sinclair (who got $18,000 from Sport Canada), can also draw on endorsements.

Like their U.S. and Mexican counterparts, Canadian players whose pay is provided by their national federations do not count against the NWSL's US$265,000 salary cap per team and there is no maximum on such pay.

"They do okay in comparison to some of the other players," said Canadian coach John Herdman.

"But we know we've got some highly talented highly educated women here. That if they chose a career, they could be earning double, triple what they're earning now.

"But we know this group are in it for something completely different. And they're prepared to sacrifice because of the love of what they do, and this team and playing for their country surpasses any of those [other] motivations."

NWSL clubs also have a separate budget, a so-called Permitted Team Assistance program that allows them to help players with housing. cars and moving. They are also allowed four international spots on each roster that are not allocated national team players from Canada and Mexico.

Buck said pay for English female pros has been improving in recent years.

Still Buck said that remains "a million miles away" from top American pros like Alex Morgan.

"It's just overall participation, interest, commercialization, those kind of factors that are just not the same in England at the moment in the women's game," he said.

The NWSL, which saw 53 of its current players figure at the tournament, currently has nine American teams. Herdman says adding a Canadian franchise is a "key step."

The CSA held talks after the success of the national team at the 2012 Olympics about a Canadian franchise, with Herdman saying there was a definitely appetite. The success of the World Cup should help further although Herdman acknowledges "it's going to take a couple of philanthropists and work to make this happen."

Maple Leaf Sports & Entertainment, for one, says it has yet to consider a women's franchise.

"Given that TFC is relatively young, the focus has been on building that club up," an MLSE spokesman said. "In due time, once the club has proven that it can win at all levels, there might be an opportunity to explore expanding into the women's game."

So far the NWSL's success is limited to the local level, said Levy.

"Hopefully that changes. But it's difficult, there aren't many truly national or global sports properties. I think the NWSL is headed in the right direction."

During the tournament, Fox announced plans to continue airing the NWSL with a modest package this season that includes televising three regular-season and all three playoff matches plus four regular-season games streamed online.

Herdman said the World Cup has already served one major purpose by inspiring a new generation of potential Sinclairs.

"This group of women has talked about the legacy they want to leave in this country. They're clear about it," Herdman said of his team. 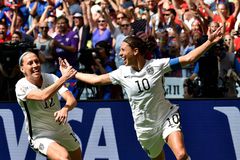 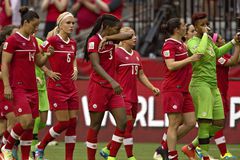 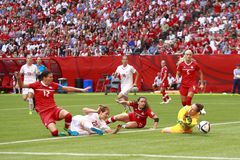