Well that cheered everybody up, hereabouts. A German surrender in Warsaw. The last Euro 2012 game to be played here aroused giddiness and it ran rampant. There was a surreal quality to the build-up in the city.

The business news dominated in print and on TV, all of it focused on another "crucial summit" taking place somewhere in the EU on Thursday. The gist of the summit being a feeling in Germany that things with Spain and Italy are approaching "unmanageable levels" – you know, banks, debt, bailouts and such. Meanwhile, an entirely different crucial summit was happening here, also and as it happens, involving Germany, Italy and Spain.

Germany was expected to dominate this particular one. And breezily, taking charge of European soccer. Moving inexorably past the Latin styles of Spain and Italy to claim ownership of the Euro tournament in Kiev on Sunday. Loads of people fell for it. It tends to happen over here, you see, that German domination thing.

So what happened? Mario Balotelli happened, mainly. The Italian striker, a young man so lividly full of talent, agility and tactical awareness that he terrifies, has rarely shown such calmness and full-tilt commitment. But he did. And at the perfect moment in his national career. Of course he couldn't have done it, this two-goal demolition of Germany, without a sublimely organized Italian team around him.

If Balotelli's second goal – the screamer past the German keeper after a long, long pass that blithely cut open the German defence, the first was closer to defining why Italy beat Germany, overall. All acclaim must go to Antonio Cassano, who showed Fred Astaire feet by dancing past Mats Hummels on the left wing, then turning past Jérôme Boateng, to deliver a cross that allowed Balotelli to direct it with stunning ease into the German net. Cassano's close control was breathtaking and, throughout Italy showed a mastery of possession that left Germany baffled.

That goal in the 20 th minute put Germany behind, an unusual circumstance and one that dazed the players. There was no plan. There was no comeback.

That it should turn out this way was shocking. It can only have been hubris that caused Germany to underestimate Italy on such a grand scale. Italy's ability to hold, control and launch searing attacks appeared to come as tactics that addled and confounded Germany. For all their vaunted speed and athleticism, it was basic lack of control of the ball and ownership of space on the field that let them down.

A hint of the hubris that might undo them came earlier in the week.

Germany captain Philipp Lahm was asked about Italy's performance against England. "It should never have reached penalties, the Italians only had themselves to blame for allowing the game to reach that point," he said. "They were very wasteful in front of goal. If that had been Germany, we would have put England out of their misery during the 90 minutes."

Ouch. And double-ouch if you're England. But it was ludicrous to underestimate that key characteristic of the Italian team – do just enough to win each game at a time. It's professionalism, an understanding of the pace of a tournament that arises, and the dynamic is often unbeatable. Germany's version of ruthlessness is no match.

And so the tournament takes its penultimate twist. And a delicious one. Here in Warsaw, centre of so much hectic soccer and related activity this last three weeks, one could feel the relief at the sense of an ending and hope that there would be a surprise result to placate local feelings.

The Germans were everywhere in the city. Large groups of happy youths, tipsy and singing loudly were visible all afternoon. A few middle-aged couples, not many, enjoying the occasion, fully expecting a German victory and another on Sunday in Kiev against Spain.

At a big outdoor Italian restaurant near the Fan Zone, a few dozen Italians paused, ate Italian food, consumed a little wine and looked around. They seemed amused by the brash Germans. They sat, in their brilliant blue Azzurri colour, cool as ice. Polish women snuck glances at the men, the chiselled good looks, chic jeans and oh-so-stylish hair.

Even the platoons of Polish riot police – they left the stadium post-game, to line the streets, keeping an eye on drunk, dyspeptic German fans – were cheery, laughing among themselves. Pleased at this turn of events. 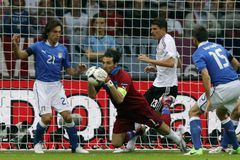 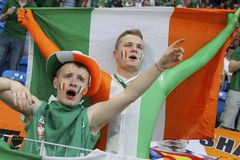 Spain enters final more with a whimper than a bang
June 27, 2012 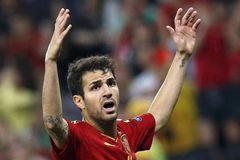