Sometimes it seems there are two tournaments going on.

On the one hand there is the one involving giddy but super-cautious England, already anticipating a 0-0 tie and penalty shootout with Italy and pondering aloud on whether goalkeeper Joe Hart will take one. It's a curiously judicious, be-prepared attitude, a kind of boy scout prudence. Or pussyfooting, some would call it.

And then there is the tournament that involves Germany and Spain and features Portugal and Cristiano Ronaldo. That one is about goals, goals and more goals. Winning by goals scored is the gist.

Portugal beat the Czech Republic 1-0 to advance to the semi-finals here Thursday and could have done so by much more than one goal. There are two things going on here – first, Portugal is serious about winning Euro 2012, and second, Ronaldo is romping his way to being player of the tournament. The one who defines it.

In advance of the game, the impression floating through the media area here was predictable and pithy. Ten players on Portugal's team would be employed as suppliers of the ball to Ronaldo. And the Czech team would be well advised to stand, mostly in awe of Ronaldo, while only Czech goalkeeper Petr Cech would be required to actually attempt to stop Ronaldo from winning the game entirely on his own. Just to make a game of it.

There has been something insane, near-hysterical about the Ronaldo story here over the past few days. Oh my God! He's up for it. He's doing for Portugal what he's done for his club teams! Patriotism struck him overnight like a lightning bolt and he's on fire! Indeed. Ronaldo has been around for a while now. He is the first Portuguese player to score goals at five major tournaments – Euros 2004, 2008 and 2012, as well as at the 2006 and 2010 World Cups. And it's true that he never seemed to soar for Portugal as he did for Sporting Lisbon, Manchester United and Real Madrid.

The knock against him was he didn't care. The whispered dismissal was that there wasn't enough money, fame or lucrative endorsements to be milked from playing at his best for his country. Never mind that now.

What needs to be acknowledged now is that for all his skills, the Portugal team never suited him, never quite fit him. A club team can be built around a player such as Ronaldo – tactics tweaked and players acquired to heighten his impact. Can't happen with a national team. What you've got in the talent pool of Portuguese citizens is what you get.

Manager Paulo Bento has cooked the ingredients expertly. The team is built around Ronaldo but not about him only. Custodio, Hugo Almeida and Raul Meireles are not his servants but tasked with creating the conditions for him to flourish when he can, and he did in the fetid Warsaw night on Thursday.

From the get-go the Czechs look less the underdogs than what they are, in truth – a formidable, physically imposing mid-level European team capable of surprise.

Then, in the 27th minute Ronaldo sprinted toward the Czech goal, with little support from his teammates. So he went solo and it took a quick congregation of five Czech defenders to stop him. Yes, five.

It's not easy to shut down Ronaldo, but the Czechs did it with aplomb for some time. The plan was to suffocate him in a sense, close down the space allowed to him and avoid what the Netherlands did, which was to let him run until somebody managed to get in his way. The Czech team marked him closely and converged on him with alacrity if he even looked like beginning an intricate move.

But he's on his own level. Just before the end of the first half, Meireles spotted Ronaldo in the box and played him a long, hopeful ball. Ronaldo brought it down with his chest, shifted it lightly past Michal Kadlec, shifted his body until he had slightest of goal. His shot beat Cech but hit the post. It was sublime control.

The goal, when it came at last looked clumsier than it was. Ronaldo seemed to head the ball down deliberately and hard, so that the bounce caught Cech off-guard. It worked. Again the control was exquisite.

That was it, all that was needed as it turned out. In the stands – this was probably shown on TV – the recent and ancient Portugal stalwarts Luis Figo and Eusebio leapt in the air and hugged. The one everybody worried about, the one with the matinee-idol looks and attention fetish, was at last taking Portugal to where it belonged.

So much depends on him now. And he seems to like it. The conditions have been subtly created, intricately done to nourish him. It's Ronaldo's tournament to lose now. The one he's starring in. 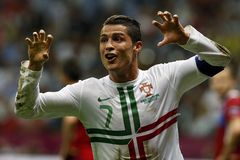 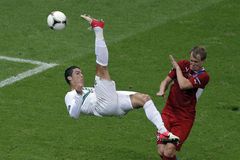 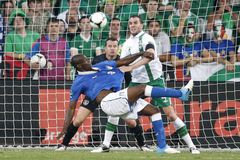