The Montreal Impact showed their fans that they take the Amway Canadian Championship seriously.

Marco Di Vaio came on as a substitute and scored twice to lead Montreal to a 6-0 win over Toronto FC on Wednesday night as the Impact advanced to the final, 6-2 on aggregate.

Di Vaio replaced Daniele Paponi 38 minutes in and scored Montreal's third goal of the first half in the 44th minute. He set up Andres Romero's second-half goal, which put the Impact up 4-0, and added his second of the game in the 90th minute.

"When you have Marco Di Vaio coming off the bench it's always a plus," Impact defender Jeb Brovsky said.

Andrew Wenger pumped his arms up after he scored Montreal's sixth goal in added time to the delight of the Saputo Stadium crowd of 14,931.

Evan Bush got the shutout and Justin Mapp and Paponi scored earlier in the first half for the Impact, who erased the two-goal advantage Toronto claimed with a 2-0 win at home in the first leg one week earlier.

"One of the things that coach talks about all the time is having character," said Bush, whose nose was bloodied and likely broken after he was elbowed by teammate Hassoun Camara. "So if I can be someone that goes out there and expresses that through what I do then that's good for the team. Hassoun got me with the elbow but there were a couple of times where I had to come into traffic and show some presence, and I was glad to do that."

Montreal, which won the inaugural Amway Canadian Championship in 2008, beat the Reds for the first time in 10 meetings between the teams in the competition. The Impact will face the Vancouver Whitecaps in a two-game final on May 15 and 29.

The Whitecaps advanced with a 2-0 victory over FC Edmonton on Wednesday for 5-2 aggregate result.

Mapp opened the scoring 24 minutes in to draw Montreal within one on aggregate. Romero made a run through the left side of the box and his centring pass struck Toronto goalkeeper Stefan Frei. Mapp stepped up and drove the loose ball past Frei as he scrambled across the goal-line.

Impact forward Andrew Wenger was called for a foul to erase what appeared to be a second Montreal goal in the 29th minute but the Impact got their 2-0 lead to draw even in the 33rd. Frei made a diving stop on Mapp's shot from the right side but newcomer Paponi was right there to put the rebound inside the left post.

Paponi left in the 38th minute and was replaced by Di Vaio, who scored six minutes later.

The Italian striker settled Mapp's pass from the right side with his right foot and beat Frei with a shot inside the right post.

Di Vaio put his considerable skill on display to set up the Impact's fourth goal in the 61st minute. He wound across the goalmouth and passed off to Romero, who moved to his right to get around Frei for the insurance goal.

The Reds entered Wednesday night's game with a 7-0-2 record against Montreal through the first nine games between the teams since the competition began in 2008.

Toronto came close to scoring just over a minute after the opening kickoff.

Robert Earnshaw, who did not play the opening game in Toronto, chased down a ball up the middle and dribbled a shot that rolled past Bush and struck the left post.

"After that we pretty much just lost every key play really that had to be made," Toronto coach Ryan Nelson said. "We didn't make it and Montreal just punished us. Every mistake we made we got punished."

The Reds won their fourth straight Amway Canadian Championship title in 2012. They did not advance past the group stage of the 2012-13 CONCACAF Champions League.

Notes: Over 2,600 students and staff from the English Montreal School Board were on hand for the game. ... Toronto drew a pair of yellow cards three minutes apart in the first half. Doneil Henry fouled Wenger 14 minutes in and Reggie Lambe was cautioned in the 17th minute. ... Schallibaum said that he expects Paponi to be out at least four weeks with a hamstring injury. Impact captain Davy Arnaud left in the 52nd minute. Schallibaum said that he had a head injury and is unlikely to play Saturday in San Jose. 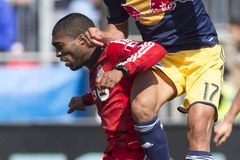 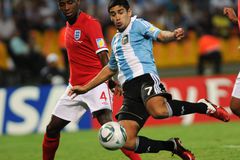 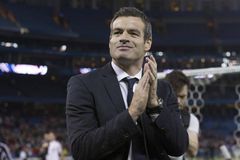