By this point, the result mattered less than the fact that perhaps the most consequential professional soccer game in Canadian history was being played at the old Olympic Stadium.

An honest to goodness Cup final played before a record-setting crowd with the CONCACAF Champions' League trophy – angular, golden, comes with its own snazzy plinth – at stake.

So, yeah, it was a-happening, and everyone was pretty much just happy to have showed up to the party.

Then, in the eighth minute, Ignacio Piatti happened.

The Montreal Impact's thrilling Argentine forward took what looked to be like a hopeless situation – trapped along the byline by two defenders – and turned it into something altogether more interesting with a spin, dribble and shimmy that left three Club America players in the dust.

His short pass to onrushing countryman Andres Romero was taken toward the penalty spot, from where Romero waited for the precise moment to wrong-foot goalkeeper Hugo Gonzalez.

If the Big O still has any lingering structural deficiencies, they will have been severely tested by the roar that accompanied the ball rolling into the America net.

Never mind the sound of one hand clapping – how about 61,000 pairs of hands and just as many voices reaching top volume all at once?

Belief is a dangerous thing, and the din peaked again in the 24th minute when Piatti found himself alone in front of goal – but his shot was saved.

The heavyweights from the Mexican league took off from there.

Benedetto would complete the hat trick in the 81st minute with a curler into the top corner.

In the 89th minute, Montreal substitute Jack McInerney gave the home supporters one more reason to get out of their seats. But it was far from sufficient.

The enthusiasm in the venerable old building, which has seen a bit of a revival this month what with the full houses for baseball and soccer, was dimmed, but not extinguished.

It was an impossible, exhilarating night.

The Impact were forced to play without goalkeeper Evan Bush, controversially suspended after picking up a second yellow card at the tail end of the first leg. With second-stringer Eric Kronberg cup-tied and third-stringer Maxime Crépeau recovering from injury, manager Frank Klopas was forced to choose between relative unknowns.

Would he select emergency call-up John Smits (of the second-tier NASL's FC Edmonton) or Nicht, a 33-year-old German veteran brought in just under a CONCACAF-imposed deadline from NASL outfit Indy Eleven?

In the end, Klopas went with the 6-foot-5 Nicht, who played in the Bundesliga and in the UEFA Europa League with Norwegian club team Viking Stavanger.

Nicht could do little in the 13th minute when Benedetto clanged a shot off the crossbar; it was swiftly hoofed off the line by the Impact's Calum Mallace, drawing a deafening roar.

Early in the second half, Nicht made a nice save on a bullet header, before Benedetto's volley, which no one could have stopped.

In a packed stadium rotunda before the game, the club's fanatical 'ultras' whipped the crowd up with chants and songs; tens of thousands of spectators were in place an hour before kickoff.

It's not quite Club America's Estadio Azteca – one of the most intimidating venues in world soccer – but when the visitors came out for their pregame kickabout, the boos were loud enough for them to notice.

By the time Piatti nudged the ball back to start the game, they were in full voice.

It only got louder from there, maybe because this was never supposed to happen.

The Impact's path to the CONCACAF Champions' League final was as unlikely as it was sinuous.

They qualified for the competition by beating rival MLS club Toronto FC last summer in the Canadian club championship, then wended their way through to the second leg of the final by first beating Mexico's Pachuca and then Costa Rican powerhouse Alajuelense thanks to the away-goal rule (goals scored on the road are used as a tiebreaker).

In Azteca stadium, the Impact became only the third MLS side ever to take a point off a Mexican side – in the current CONCACAF format, clubs from that country have owned the championship.

There will be plenty of talk that the crowd of 61,004 at Wednesday's game somehow represents a watershed moment.

The Impact have set attendance records before, after all.

Three years ago, conventional wisdom held the impressive attendance figures in Montreal's initial forays in MLS were a sign of the professional game's ascendancy.

It hasn't really panned out that way.

Regular season attendance at Impact games has been hit and miss. After finishing with the league's third-highest gate in 2012 they tumbled to 11th in 2014.

In February, team owner Joey Saputo publicly lamented that "the buzz is not there anymore."

A rousing Champions' League quarter-final defeat of Pachuca – the Impact scored a last-gasp equalizer to win the tie in a gripping home leg – has brought some of it back, clearly.

But it seems fairly clear that grassroots development initiatives such as the Impact's youth academy – which has already produced first-team players for the club – will probably have a more significant long-term effect on the game.

This summer's Women's World Cup – to be shared among five Canadian cities including Montreal – will also generate a lot of attention on the sport. Montreal Mayor Denis Coderre, who was in attendance on Wednesday, insists he's serious about trying to attract the men's event to this country; he doesn't appear to be crossing his fingers when he says it. 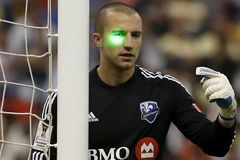 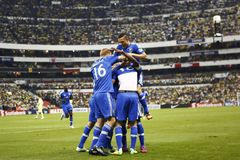 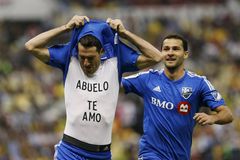