Excuse my rant. But, just when a person thinks England isn't insufferable any more, along comes Andy Carroll and his hair.

There were many memorable moments in England's thrilling 3-2 victory over Sweden on Friday at Euro 2012. But after a sensible person dwells on Danny Welbeck's beautifully contorted movement to back-heel that deciding goal, the image that lingers is of England striker Carroll fluffing his magnificent Tarzan mane as the first half ended.

Actually, if Welbeck hadn't scored that gorgeous goal the dominant image would be Carroll's hair fetish. That and, maybe, England manager Roy Hodgson biting his nails with surreal concentration.

English soccer is a world unto itself.

In Canada, a lot of soccer fans live in that world, unfortunately. The English sports media saturates our understanding and perception of soccer. We know too much about Wayne Rooney and too little about Jérémy Ménez, the French midfielder who, on the evidence of France's 2-0 cruise past an obdurate Ukraine on Friday, is the next Zinédine Zidane.

As enjoyable as England's victory was, the performance by the victors was hardly world-class. Coming from behind with admirable determination, England defined the familiar term "positive response to adversity" which is used all too often about this team.

England's tactics and technique are, in reality, lamentable.

That is, Hodgson decided to start Carroll as the main striker, while Sweden relied upon the equally tall, muscular Zlatan Ibrahimovic.

This is the reduction of soccer to absurd, groan-inducing simplicity – move the ball until it can be delivered to the big man up at the front line. It worked when Carroll scored England's first goal, a holey-moley, look-at-the-big-man jump goal.

Perhaps lost in the thrill of it working so well is acknowledgment that some teams do it differently. Such as Spain.

In Spain's easy win over Ireland, the winning team completed passes 859 times. Xavi Hernandez alone did it 127 times with a 93-per-cent success rate. That's a tad different from delivering balls high into the penalty area aimed at the big man's head.

(But more about the big man's head in a minute.)

England only needs a tie game against co-host Ukraine on Tuesday to progress to the next round, where it will meet far-sterner opposition if progress happens. In the pause between then and now, some painful reality checks are in order.

Welbeck isn't Pele. (Although it is perfectly possible Carroll could play Tarzan in a movie.)

England's performance was a credit to old-fashioned soccer, and inspiring to trudging teams and players all over the world that pays attention to English soccer. But it's worth noting Hodgson was biting his nails to the quick for good reason: At times, England looked hopelessly grasping, desperate and unsure.

And this against a clearly tired Swedish side that relied so much on the same tactic of delivering the ball to a tall man loitering in the opposition's penalty area. The only difference was Ibrahimovic lurked, looking for small pockets of space, while Carroll strutted and preened.

It's the preening that settled it in terms of the iconography of a game that looked and felt like an English Premier League match on a Wednesday in mid-season. Hearts of oak against stalwart, stout-hearted men kind of thing. Soccer at this level, the European championship level, is generally more complex and sophisticated.

When Carroll did that thing with his hair, he epitomized English soccer. And its insularity.

He'd scored with his head, so he showed off his head. And was well-satisfied.

The simplicity of the connection was understandable, but insufferable. Big-headed about grasping the basics, brutally ignorant of any other way of playing.

Tarzan and Jane. England and Spain. Brute and beauty. Think about it. 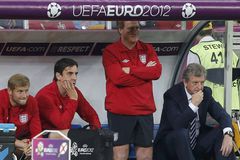 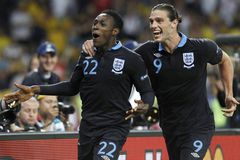