Striker Jermain Defoe says he is back to 100 per cent and ready to play for Toronto FC — and England.

"It's been really frustrating because when you get off to a good start, you just want it to continue as long as possible," said Defoe, who scored three goals in his first two games in Major League Soccer before being sidelined with a hamstring strain in late March.

"But it happens. It's football, you get little niggles. Luckily enough it wasn't something that was too serious. It was just a case of resting and doing your rehab stuff. But yeah it feels fine now. I feel 100 per cent. I've worked really hard. So maybe I'll come back stronger than I was before, which is important for the team."

Saturday's game against the visiting New England Revolution (3-3-2) will mark five weeks since Defoe walked off the field favouring his hamstring in the 61st minute of a 3-0 loss to Real Salt Lake. Thanks to a bye, he only missed three games with Toronto (3-3-0) going 1-2-0 in his absence.

Defoe, speaking to reporters after practice Tuesday, rubbished the suggestion that the injury layoff may affect his chances at making England's World Cup squad. England manager Roy Hodgson plans to name his 23-man roster on May 13.

"I missed three games. It happens in football, players get injured," said the 31-year-old Defoe, who has won 55 caps for England. "But if you miss three games and that changes the fact that you could, I don't know, go to a tournament, that's crazy."

Manager Ryan Nelsen says he has not heard from the English camp. "Not yet," he said.

Defoe, for one, does think much talk is needed.

"I don't feel like I need to sell myself to anyone because I'll just let my football do the talking. I've done that since I made my professional debut at 17 ... I'm sure the manager knows what I can do."

Defoe said not only is he 100 per cent physically, he feels stronger than he did before.

Toronto FC officials have said privately they had to put the brakes on Defoe, who has acknowledges he is not known for his patience during injury layoffs.

Defoe's final days at Tottenham were marred by another hamstring injury.

"It's a case of just getting it (the hamstring) strong again. Maybe I didn't do that before," he said.

"I think now I've really given it time to heal," he added.

Defoe said his style of plays lends itself to hamstring issues — "sometimes I go from a standing still position to get up to full speed."

Toronto has had a spate of hamstring injuries this season with midfielders Jonathan Osorio, Alvaro Rey and Dwayne De Rosario all missing action.

The club has said having to train longer than usual on artificial turf because of the harsh winter has not helped matters. Ironically it would have liked to have been able to practise under the bubble on turf Tuesday because of a downpour. But with the bubble about to come down, the lighting system had been dismantled and so they endured the rain outside.

The good news is that the walking wounded are returning after the bye week.

Osorio is already back in action while Nelsen says Rey, De Rosario and centre back Doneil Henry (knee) are "very close" to returning.

Nelsen says the only player definitely out for this weekend's game is midfielder Jeremy Hall (Achilles). Striker Bright Dike (Achilles) is also a long-term injury absence.

Star U.S. midfielder Michael Bradley, who has been nursing a variety of ailments, is also doing well.

Injuries have hampered Nelsen in blending his squad, which features three new designated players in Defoe, Bradley and Brazilian striker Gilberto and as many as five other new starters since last season. Two weeks ago against Colorado, he was unable to assemble a fully healthy bench.

While Toronto has given up seven goals in six games, it has scored just six with Defoe accounting for three of them

Toronto is getting healthy at the right time. After three games in April, Toronto has six in May including a home-and-away series with the Vancouver Whitecaps in the Amway Canadian Championship. Three of the four league games are at home so May represents a chance to harvest points.

With Bradley, Brazilian goalie Julio Cesar and possibly Defoe joining their national teams at the end of May ahead of the World Cup, points may be harder to come by later.

While Defoe has not yet heard from Hodgson, Cesar says he reached out to Luiz Felipe Scolari to invite him to Toronto after reading that the Brazil coach had visited players in Europe.

"I was a little bit jealous," Cesar said with a smile. 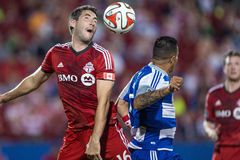 Minus Defoe and Bradley, Toronto FC fall at home to Rapids
April 12, 2014 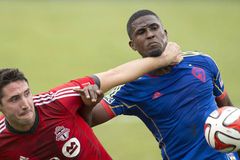 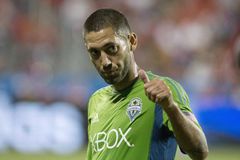 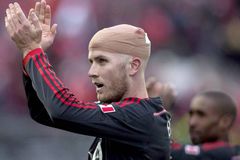