It was an issue. Then it faded. But it didn't go away, this issue of the Women's World Cup in Canada being played entirely on artificial turf – every game, in every stadium.

The turf became an international news story last year when a group of female players – more than 40 from the United States, Europe and South America – took a complaint to the Human Rights Tribunal of Ontario. It was straightforward: The major tournaments in men's soccer are played on real grass, so forcing women players to compete on plastic grass was gender discrimination.

The complaint was aimed at FIFA, the governing body of world soccer, and the Canadian Soccer Association, the host organization for the 2015 Women's World Cup.

The complainants were correct and everybody knew it. Celebrities endorsed it; the public saw it for what it was – a legitimate objection to sexism-driven inequity. Blatant discrimination.

The complaint was withdrawn in January of this year. FIFA didn't surrender and the CSA didn't cave, but upgrades to the artificial surface at B.C. Place in Vancouver – which will host nine games, including the final – were promised. Some brief talks took place. The players felt they'd made a point. They had to move on. Their lawyer was very blunt, referring to "the sexism, greed and stubbornness" of FIFA and the CSA.

Amid the anger, resentment and outcry, the central issue is the insult to women's soccer. Forcing women to play on an artificial surface suggests the women's game is itself artificial, an inauthentic, plastic version of the real game men only play on grass. It isn't. And yet the stance of FIFA and the CSA drips with disdain.

The Women's World Cup will start June 6 and take on a life of its own. The turf issue will be overshadowed by victories and defeats, drama and disappointment. Still, the issue simmers a little, as it must.

On May 7, through its Twitter feed, FIFA issued a five-page Q&A document on the turf issue. This is how FIFA operates – it asks the questions and provides the answers.

It's a convoluted document of tortured prose and weasel language. The main point is in Question 2 – "What is FIFA's reaction to the claims that this is gender discrimination?"

And the answer is this: "The FIFA Executive Committee's decision to approve the proposal by the Canadian Soccer Association and its NOC [national organizing committee] to play the competition on football turf was not based in any way on gender. Rather, it was based on various considerations, most notably the existing infrastructure and the conditions in Canada, and, for the sake of consistency and in line with recommendations from a medical point of view, the need to have the same surfaces of the best possible quality across all venues including stadiums and training sites."

This policy led to the absurd circumstance of the natural grass surface at Moncton Stadium being removed and replaced by artificial turf – at some cost – to host World Cup games.

On May 8, perhaps by coincidence and perhaps not, the veteran U.S. player Megan Rapinoe published a withering retort. Writing for The Players' Tribune, an online forum for athletes founded by retired ballplayer Derek Jeter, Rapinoe set out her five reasons to be excited about the Women's World Cup in Canada. It wasn't all cheerful, mindless optimism.

Rapinoe wrote: "The artificial turf will have many implications. I'm not going to dwell on this, but I'm also not going to drop it, because it needs to be said. This will be the first global football tournament played entirely on artificial turf. FIFA made a $338-million profit on the 2014 Men's World Cup. To say that it's not logistically possible to install real grass at all the stadiums is not acceptable, in my opinion. We have played on grass all our lives. Now we're going to compete at the highest level on a different surface. I think it has a lot of implications."

She went on to cite the obvious issues – it is more difficult to control the ball on synthetic turf, and the artificial surface is harder on players' bodies and leads to more injuries. Rapinoe's teammate Sydney Leroux has in fact posted numerous photos of injuries to her body from playing on artificial turf, and the cuts, bruises and burns look horrific. Rapinoe wrote: "The wear and tear is going to make the depth of teams very important. The level of football and the style of football that everyone wants to see will suffer a little bit, and that's a shame. The good news is that because women from across the sport came together to protest FIFA's decision, I really believe that they'll never have another Women's World Cup on turf again. So we can at least take that positive out of it."

It's a positive that the female players took on FIFA in the first place. It was an act of rebellion that male players of any prominence might avoid. The governing body of world soccer is fiercely intractable, and more than ornery with those who question its authority and decisions. It had not, however, met a group of determined, angry women players before.

The act of rebellion certainly had one key impact. FIFA awarded the next Women's World Cup, in 2019, to France, and the French Football Federation has made it crystal clear that all games will be played on natural grass.

No Canadian players joined in the formal complaint. With the CSA as both host organization and boss of the national team, breaking rank to complain was unthinkable. At the time of the complaint, TSN reported – incorrectly – that Canadian player Kaylyn Kyle had signed a $15,000 deal to endorse FieldTurf, the company providing artificial turf to four of the six stadiums being used for the tournament. According to the CSA, "There was discussion between her and the company, but they never entered into a formal agreement."

Perhaps after this Women's World Cup, Canadian players can speak out. Perhaps the tournament itself, no matter how successful, will go down in history as an anomaly, the one that had to be played on artificial turf. And after it's over, the women's game will never be insulted this way again. 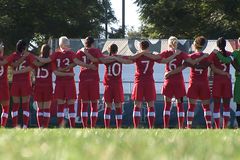 The Canadian women’s soccer team has no choice: They’ve got to get to the final
May 31, 2015 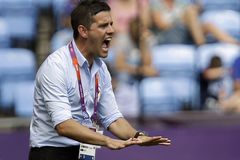 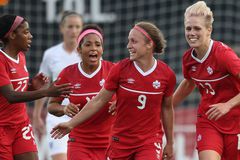