The Brazil No. 1 is headed to the World Cup and says England's Queens Park Rangers want him back afterwards.

QPR's loan deal with Toronto called for the 34-year-old Brazilian to stay with the MLS side through December but Toronto manager Ryan Nelsen says there is a "gentleman's agreement" that the English team can have him back sooner.

Cesar, while confirming QPR wants him back in August, is unsure of where his future lies.

"I'm contracted still in England for a few more years," he said through an interpreter Tuesday in his final meeting with the Toronto media before leaving to join the Brazilian World Cup team.

Asked if he thought his time in Toronto was over, Cesar switched to English: "I don't know. Depends (what happens) after the World Cup."

The Cesar move to Toronto was always a marriage of convenience, with a short time frame.

Manager Harry Redknapp, who inherited Cesar from Mark Hughes, made former England 'keeper Rob Green his No. 1 so Cesar needed a place to play to hold down his Brazil job.

There were reported links to Italy's Napoli and Brazil's Gremio, but Nelsen, who is close to Cesar's agent and knew the player from his own days at QPR, convinced him to come to Toronto.

For TFC, the loan was like a fourth designated player. And Nelsen knew that Cesar's influence on 25-year-old goalie Joe Bendik would last long after the Brazilian had departed.

QPR meets Derby County in the Championship playoff final at Wembley this weekend with the winner moving up into the Premier League. But it seems unlikely that Cesar will finish out his contract in a QPR jersey whatever happens on the weekend.

The English team, taking advantage of what hopefully will be a World Cup showcase in Brazil, is more likely to try to sell him and recoup some of its investment. MLS would be unlikely to take on the cost of Cesar's contract and QPR would no doubt want more than it is likely getting under the current loan deal.

Bendik, last year's No. 1 in Toronto, will take over in goal for Toronto, either for the short-term or long. He has played the last three games for Toronto, two in the Amway Canadian Championship and in Saturday's 2-0 league win over the New York Red Bulls. Cesar missed the weekend game with the flu.

Nelsen, while keeping the door open, says he's "not sure" that Cesar will be back after the World Cup.

Privately, the club does not expect him back.

Speaking through an interpreter, Cesar said his time in Toronto has prepared him well for the World Cup.

"I feel like I'm a better person being here after three months and experiencing what the club has had to offer me and getting me ready for the World Cup," he said.

Cesar says retirement after the World Cup is not in the cards.

"I'm still under contract for the next two years. So even if I win the World Cup, I'm going to keep to my word, I'm going to return to my club (QPR) and help them win championships. That's what I was contracted to do, so that's what I'm going to do."

QPR could also read that as "I'm going to collect what I'm due."

The veteran Brazilian has already won five Italian titles, seven Italian cups, the Champions League and the FIFA Club World Cup. He was named Serie A Goalkeeper of the Year twice and nominated for the Ballon d'Or award in 2009.

He has been a class act in Toronto, winning praise from coaches and teammates alike for his ability as a player and easy-going personality.

"It's just a pleasure to have a man like that on the team," Nelsen said of Cesar.

Bendik, who started the season as a backup to the Brazilian despite signing a new, enriched deal after winning the No. 1 job last year, has credited Cesar for making him a better goalie and calls him a friend.

In other team news, Nelsen has injury concerns with Brazil's Jackson (concussion) and fellow midfielder Jonathan Osorio (hamstring and hairline fracture in his hand).

Jackson has yet to resume training and Osorio, who is due for a scan on his hamstring, seems doubtful for Friday night's game in Kansas City. Nelsen said the Canadian international may have come back too soon from a previous hamstring injury, which extended his absence from the lineup.

"We have to be a bit careful with him," said Nelsen. 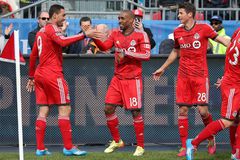 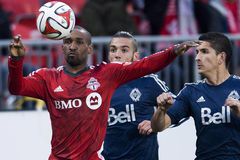 Toronto FC off to national final after edging Whitecaps in penalty kicks
May 15, 2014 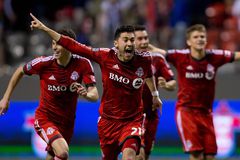