When Toronto FC striker Jozy Altidore moved to Sunderland in 2013, he was in position to become the best American player in the world. Maybe ever.

He was 23. He was valued at $12-million (U.S.). He'd scored 31 goals the previous season for Dutch side AZ Alkmaar – a better rate of return than wildman/superstar Luis Suarez just before he made a similar switch.

It went wrong, and in a hurry. In 42 league games over two seasons, Altidore managed only one goal.

One of the ways in which the Premier League continues to prove it's the world's deepest competition is by occasionally destroying the career of a well-advertised talent.

The fans take a perverse pride in it. At Sunderland, supporters nicknamed Altidore 'Dozy Anti-score.'

Altidore didn't freak out, despite a rolling series of setbacks. That's the usual path for players bred anywhere but North America. When he got his chance to leave on good terms, he took it.

Because five years ago, Altidore was bound for greater things. Now, he's bound for the right things.

On his debut, Altidore scored twice – doubling two years worth of English output in less than two hours. The second goal was a target-man masterclass – splitting the defence, holding off a defender, taking the ball down at speed, getting hacked in the box, drawing the penalty.

Having shown his quality, he decided to display his cheek. When the Vancouver keeper jumped early, Altidore lightly looped the ball into the middle of the net, just under the crossbar. They call that a Panenka, after the Czech footballer who made it famous in the final of 1976 European championships.

Have you ever tried that before?

"No, that was my first one," Altidore said.

But you've worked on it a few times?

"No. It was kind of spur of the moment."

The pros talk a lot about confidence, but it's sometimes hard to spot out there on the field. This was it. You don't do 'spur of the moment' unless you're feeling on top of your game. And you definitely don't try a Panenka, the buttered hand grenade of soccer shots. Missing one can become a career-defining gaffe.

Someone asked if he'd worried it was coming back off the crossbar. As Altidore was shaking his head, "Naaah," teammate Michael Bradley was across the room screaming, "YEEESSS!"

It is tempting to compare his opening-game performance with last season's bold-faced name, Jermain Defoe. And then to spot the differences.

Defoe also scored twice in his debut, and looked dominant throughout. Altidore is a different sort of player. When he's not scoring, he can be invisible. He can't create his own chances (which made signing the equally impressive Italian playmaker and debutant, Giovinco, so important). He's the prototype American star – uncultured, unafraid and really good at one thing.

Defoe was and is decidedly European – especially so by English standards. He's an all-rounder who can go past people. Where Altidore is a hatchet, Defoe is a Swiss Army Knife.

Defoe was built for the Premiership, which is why he should never have left. Aside from some continental superclub, nothing outside England was ever going to seem good enough for him.

Those two goals in his first game for Toronto didn't confirm Defoe in his belief that he'd made the right choice. Rather the opposite. They reminded him that he'd taken a step down. From then on, his entire focus was England's World Cup squad. When he didn't make it, he gave up on MLS entirely.

Altidore had the same sort of debut performance, leading to vastly different conclusions.

Goals at the jump take the pressure off. The penalty choice confirmed it.

He makes $7-million a year in MLS – far more than he'd make anywhere else in the world. He's a hero to his core constituency – American soccer fans. He's validating the decisions of his national-team manager, Jurgen Klinsmann, who kept faith with him while he was digging trenches with his feet in England.

More than that, he's back where he belongs.

Europeans come here, and struggle with everything but the football. After Saturday's game, the cameras rushed in to talk to TFC captain Michael Bradley. He was in discussion with Giovinco, in Italian. Giovinco was wearing only a bath towel. When he saw the press, he leaped up and retreated to a corner. He goggled for a bit in confusion, then looked over to teammate Steven Caldwell for assistance. Caldwell mimed '15' – the number of minutes after a game the press is admitted. In Europe, the media never make it past the locker-room door.

Over in another corner, a second European newbie, Damien Perquis, was having a similar reaction. Defoe never got used to this.

Altidore wandered in a few minutes later. He knew what was coming. When it did, he took it as his due – after you've done well over here, you get to talk about it. After you've screwed up, you talk about that, too. And most days, you just talk because people like to hear you talk. Welcome to sports in Canada.

In returning, he's teaching Toronto FC the other half of a profound lesson – don't fall in love with players who can't love you back. 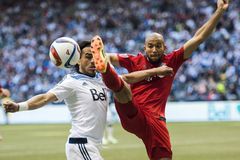 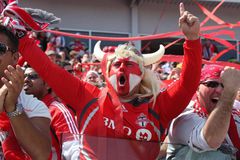 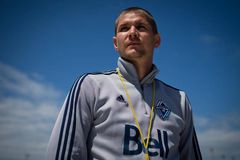 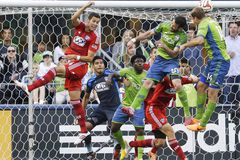 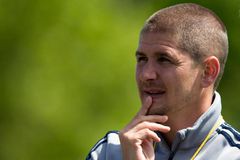