Though everyone involved has agreed to a great forgetting, David Beckham's tenure in Major League Soccer was largely a disaster.

The English star seismically shifted expectations when he agreed to cross the water in January, 2007. MLS scrapped its restrictive pay structure to make it worth his while. The deal was advertised by Beckham's management at $250-million (U.S.) over five years – a made-up number.

He arrived in July, halfway through the MLS year, having injured his ankle during his last days at Real Madrid. This should have been the tidying-up period that precedes moving on to new employment. Instead, Beckham received cortisone shots to get him through those games.

He played 16 mincing minutes on his first night in Los Angeles, in a friendly against Chelsea. Then he didn't play again for months. No one mentioned cortisone this time.

The Beckham Show rolled through city after city. The man who'd sold all the tickets wore funereal black on the bench. You could spot him because he was the guy with the bodyguard. He started two games in his debut season.

Then he did something that changed MLS again – he decided to work through his vacation.

Now finally healthy, Beckham returned to Europe and caught on as an occasional sub with AC Milan. It was never suggested by anyone in MLS management or at the L.A. Galaxy that several months of extracurricular wear on an oft-injured player was a bad idea.

Certainly, no one would go a logical step further – that Beckham was taking advantage.

And then the step after that – that Beckham liked the idea of what MLS might be, but didn't rate its current incarnation.There is no equivalent in top-calibre sports. No one's tried anything like it since the Babe Ruth barnstorming days – and nobody was trying to break the Babe's legs every time he took batting practice out in the sticks.

The key difference is money. MLS pays like a major league, but it doesn't play like one. In the NBA or NFL, veteran players will offer a discount to play on a great team. In soccer, they no longer have to make that choice. They swan off to Europe to play for a super-team in the winter. MLS makes up the financial difference in the summer.

MLS had a chance to cut this off at the beginning, but every head bowed to Beckham's whims. Who can blame him for capitalizing?

The faults lies with the league. It folded. That mistake has become the biggest issue facing MLS as it tries to make the growing leap into the top tier of North American sport.

Beckham came to North America for several reasons – the money, the branding opportunities provided by a perch in Hollywood, the chance for a quieter life away from the tabloid press. Soccer featured very low on that priority list.

He also came on behalf of his colleagues. Beckham acted as a de facto lead scout for every name-brand European looking for a lucrative way to round out their careers.

The way he was allowed to carry himself sent back a clear message – MLS is a lucrative hobby league.

Trace a straight line between the freedom allowed Beckham then, and Jermain Defoe and Frank Lampard now.

MLS has had one unqualified success with a major European player – Thierry Henry. The Frenchman clocked in and did a solid five-year shift (and only returned to Europe once, an abortive stint with Arsenal). Henry committed to the league in a way no real star had before or since.

Nobody talked about him while he was here. He wasn't a guest on late-night TV or a reliably viral presence. Removed from the hothouse of European soccer, his image withered.

Henry did the same good work he'd done in Europe – scoring plenty of goals. Nobody cared. He dropped entirely off the map as an international commodity.

He only popped back up again a few weeks ago, as he announced his retirement. That sent its own message.

Henry is a worldly man. MLS has had its share of talents, but it's had very few of those. That's another problem that's never been addressed. The league repeatedly conflates players who like the paycheque with players willing to accept the responsibility of building something. They've all learned the patter – "a new adventure" – but no one's followed through.

Defoe is the most glaring example. Lured to Toronto with the promise of cash and profile (but mostly the cash), he convinced himself this was the only way to make England's World Cup team. He wasn't playing in Europe. MLS wasn't a destination – it was a showcase. It doesn't appear that Defoe really thought about what might happen after Brazil 2014.

Once his World Cup opportunity fizzled, Defoe collapsed in on himself. It's hard to rally a bunch of $60,000-a-year guys when the one making $6-million doesn't want to be there.

Like Beckham, he came with a nagging injury – a hamstring. That moved north into a groin problem. He took a seat on the bench, which gave him time to nurse his grievances. His handlers began agitating for a move away. At the least, Defoe had the sense never to say it himself.

He did take this one large step further than Beckham – he didn't want to moonlight in Europe. He just wanted to go home. This was never really about hating Toronto. It was about missing England.

Owing to long-standing tradition and EU employment laws, soccer contracts don't mean much in Europe. If a guy wants to leave, he just says so and – presto whammo – he gets what he wants. On rare occasions, a team will sit a restive player down as punishment, but he's now a declining asset and he's still getting paid. So he's moved eventually. There isn't a recent high-profile instance in which a player hasn't won one of these fights once it becomes public.

The difference in Europe is that the pros want to remain within the same system – albeit with bigger clubs. Lesser teams also want to cash in on them. Owners and employees have found a compromise that creates a kind of balance.

That isn't the case here. Money isn't MLS's problem. Most owners have plenty of it. What they want is loyalty. As of yet, that can't be bought.

European pros repeatedly bring two corrosive beliefs to MLS – one old world ("I can leave whenever I want"); one new ("This league doesn't really matter.")

That problem reached its zenith with former Chelsea and England star Frank Lampard. He's 36 years old. His club thought he was finished. Facing the humiliating choice of moving down a tier – to the Aston Villas or West Hams of the world – or moving out, he chose escape.

Debutant MLS club New York City FC signed him. It announced him. It unveiled him in a glitzy presser. He moved to Manchester City in the interim – a bigger club with the same ownership. Things went well. And suddenly he wasn't a NYCFC player. It turns out he'd never signed with it in the first place. Instead, he'd done a contract with the holding company that owns a stable of teams, including NYCFC and City.

Now he's staying in England. The signature signing of a brand new club will not join it until July – halfway through the coming season. It's a disgrace. The league doesn't seem to understand how embarrassed it should feel. It has got used to this sort of abuse.

Toronto FC has taken the issue in hand. It had Defoe. It rid itself of him, and got American Jozy Altidore in return. Altidore has been an abysmal failure at the highest level in Europe. He has nowhere left to go. He's the perfect MLS player.

It's been reported the deal is worth $11-million. It's not at all clear where that money is being spent. It's been suggested that number refers to the salaries involved, rather than a transfer fee.

"We're not permitted to disclose the terms of the transfer," team GM Tim Bezbatchenko said. They were pretty keen on talking about them a year ago. This strongly suggests that Defoe was given to English club Sunderland for Altidore in something approaching a straight swap – selling him for pennies on the dollar. Altidore is a serviceable pro. Defoe was a star. The club learned a very expensive lesson – only Americans can be counted on to care about North America.

On Friday, TFC unveiled Altidore with markedly less fanfare than Defoe. A year before, there had been props. MLSE CEO Tim Leiweke had worked himself up to the verge of tears.

Now, it was the matter of 15 minutes. Nobody pretended to be excited.

"I'm committed long-term," Altidore said, in what was clearly a rehearsed line. That's all anyone wants to hear any more.

Since the league lacks the courage to get eye to eye with its stars, there's only one – harmonize the seasons.

This would mean playing through winter, outdoors, in Canada. But it's the only way to prevent its lackadaisical poster-boys from wandering.

It won't happen, despite FIFA's prodding. The league is still married to live attendance – the only way people regularly consume this product.

MLS will remain in thrall to a few brand names, most of them English. The L.A. Galaxy just signed Liverpool legend Steven Gerrard. The club that made him couldn't guarantee him a starting spot any longer. So he moved on.

MLS greeted his arrival as the new Beckham – a transparent effort to stop people talking about the Lampard debacle. He is the standard bearer for a billion-dollar concern.

On Thursday, Liverpool CEO Ian Ayre told the BBC that Gerrard's return on a loan deal was "conceivable."

"It happens a lot in MLS," Ayre said. "It's something we've talked to Steven and his representatives about."

One wonders when MLS will hear about it.

MLSE boss has regrets with Defoe but sees bright future with Altidore
January 16, 2015 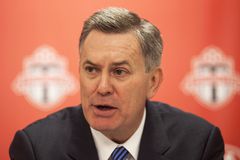 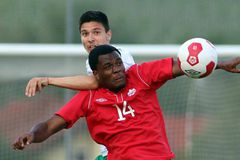 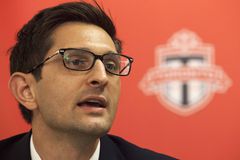 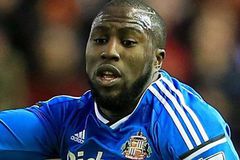