Vorfreude is one of those wonderfully expressive but difficult to translate German words.

It means "joy of anticipation" but has the sense that the pleasure beforehand will be greater than whatever it is you're looking forward to.

Northern Ireland entered its final game of the Euro group stage against world-champion Germany knowing it had very little chance of winning. Or of drawing. Or of not losing quite badly.

The result was as expected – a 1-0 defeat far more one-sided than the scoreline suggests.

Given their outsider history, this might well have been Northern Ireland's – both the team's and its supporters' – last chance at this tournament to rise to an occasion. They did so in the sort of grand fashion that reminds you why they don't just invite the eight best teams from Europe and start from there.

Though a competitive failure, this was also an act of national defiance against unlikely odds. It was the sort of game you had to attend to fully appreciate.

It is a general rule of thumb here that the better the team, the quieter its fans. Having seen their team win so much, the Germans are more reserved than most. They rarely stand. They do not sing over their opponents or whatever music is being piped in on the PA.

They're here to watch the most technically gifted side on the planet with something close to reverence.The Northern Irish have neither the quality squad nor the patience to wait for cues. They sing when they can.

They were in the stadium and on their feet an hour before the match. Most of them were wedged into a clump of 10,000 or so in the northeast corner of the Parc des Princes.

It must have occurred to them that this was probably going to be the best hour of their evening. The hour before actual football began being played, before all the flaws of a side largely made up of players who don't have jobs in top-tier leagues became apparent. This was the vorfreude.

They were well into the new national anthem – Will Grigg's On Fire – when most of the rest of us showed up.

If you haven't heard it, it is difficult to express the catchiness of this odd ear worm, based on a 20-year-old Italian dance hit. And if you need to concentrate at any time in the next few days, I do not suggest listening to it now for the first time. Save it for when you next have three straight days to sit in one spot and drive yourself insane with humming.

The meat of it is an endless progression of Na-na-na's, along with a grooving arm motion that makes it look like thousands of people are simultaneously trying to screw themselves into the ground. The refrain: "Will Grigg's on fire; your defence is terrified."

Grigg is a Northern Ireland player who rarely gets off the bench for his country. The song was adapted by a supporter of Grigg's club team, Wigan, and caught on. And caught on some more. And has now caught on so ferociously that two versions of it are in the English pop charts.

It has gotten to the point that Germany's Mats Hummels was asked before the match if he was worried about Will Grigg, that huge amount of fire and his terrifying effect on the German defence, all of which he somehow achieves from the bench.

"Although I like the song and the action and would like to agree with them, it's not quite right that we are terrified," Hummels said.

Which might be the most German answer of all time.

Germany got on top of their team early and then sat there. From a tactical standpoint, this was like propping a chair against a door while the person outside fires up a tunnel-boring machine. Germany drifted through Northern Ireland at speed and at will, but could not locate the killing thrust.

It is the habit of even the best football crowd to quiet down once its team is being swamped. Not this one.

The German support watched silently. The Irish were up and dancing.

Of course, it couldn't last. Like all German teams, this one seems to have an inexhaustible supply of players so sublime in their finesse and mutual understanding, you might burst into admiring tears if you watched them long enough. There are plenty of great craftsmen in international football. This is a team of artists.

As you knew they would, Germany scored.

Okay, you thought, now the Irish will lose some steam.

No, not these people. Still up. Still roaring.

The German support finally got to its feet to celebrate the goal. The Irish shouted them down with a chant of, "You only sing when you're winning."

Germany might have won it 6- or 7-0. It could've easily turned into a Brazil-ing.

But it didn't. Northern Ireland was bent at a painful angle, but refused to snap.

Some of that credit must go to the fans. They wouldn't stop. How could their team? (Later in the evening, they would learn they've qualified for the knockout rounds.) In 100 or so total minutes of match time, there might've been five where every supporter in green wasn't up on his or her feet bellowing.

After it ended, the German players seemed more drawn to their opponent's fans than their own. The men in white drifted over that way after the handshakes. They must have recognized that Northern Ireland is the Germany of cheering.

Fifteen minutes after the final whistle, the stadium had emptied. The Irish remained in their seats, refusing to leave.

As you got further away from the Parc des Princes, the noise ebbed and the dusk began folding in on you.

But in the distance, you could still hear them Na-na-na'ing.

As long as they sang, the vorfreude never had to end. 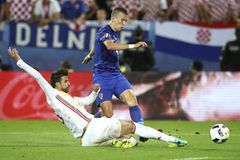 Doyle: At the Copa America Messi vaults ahead of Ronaldo in everything
June 21, 2016 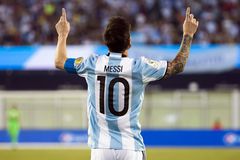 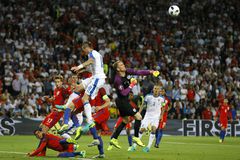