As first impressions go, it's going to be hard to beat.

Acquired early Saturday for a conditional draft pick from the New York Red Bulls, Quincy Amarikwa was the right man in the right place to find the back of the net against 18-time English champion Liverpool, joining Gabe Gala in the small but select group of Toronto FC players to have scored against some of the world's biggest soccer clubs.

But while Gala's was a mere consolation on the way to a 5-1 thrashing against Real Madrid three years ago, Amarikwa's goal actually put Toronto in front, lending credence to the fanciful notion that the fledgling Major League Soccer outfit could actually beat the five-time European champions.

Predictably, that notion lasted all of 10 minutes as Liverpool's youth brigade did just enough to leave honours even in a 1-1 friendly draw on Saturday.

Still, it would take more than that to wipe the smile off the newest member of TFC.

"As a forward you're always envisioning yourself scoring a goal every game," the 24-year-old Amarikwa said afterward. "I was just happy to go out and execute that today."

Though Liverpool's starting lineup was devoid of many of the household names usually associated with the club – owing to a FIFA statute on mandatory holiday after Euro 2012 - TFC players were happy to focus at the badge on the front of the jersey rather than the names on the back.

"For sure, we played Liverpool Football Club today and drew 1-1 with them," said midfielder Terry Dunfield, looking beyond the absences of Steven Gerrard, Luis Suarez and others. "Probably had the better chances as well."

While he may have had a point, had Toronto actually converted any of its other three shots on target, Liverpool would likely feel aggrieved that it was not awarded a clear-cut penalty in the first half when Charlie Adam's shot cannoned off Dunfield's forearm in the penalty area.

But Liverpool manager Brendan Rodgers, overseeing his first game in charge, was certainly content with the result, coming in the first of a three-match North American tour.

"This was a perfect game at our stage of the season," he said. "[Toronto] are physically strong, they compete well. [TFC manager Paul Mariner's] obviously done an excellent job in the short time that he's been in here so it was always going to be a good game and I thought they played very well."

Rodgers certainly couldn't fault the atmosphere generated by 33,087 fans at Rogers Centre. All the comforts of home were on offer, from the famous all-red kit – Toronto opted to wear its white alternative uniform – to the obligatory pre-match rendition of "You'll Never Walk Alone."

"I thought it was phenomenal," said the Northern Irishman. "You travel this far away from Liverpool and I've got to say it was like being at home and a big applause for the supporters, who've really turned out in their numbers."

But if a quick glance at the starting lineup wasn't enough of a giveaway – the likes of Andre Wisdom and Nathan Ecclestone are hardly household names in the English Premier League - the kickoff drove home the reality, as if it was really needed, that this match was being played at the relatively modern Rogers Centre and not the old-world footballing cathedral that is Anfield.

For a side made up of a mixture of senior and youth players, Liverpool started out much as would be expected – disjointed. Some of the touches were woeful – indicative of team playing its first preseason friendly, but the visitors weren't the only culprits in that department.

Consequently, clear-cut chances were few and far between in the early running, with Ryan Johnson's slashing drive from a Luis Silva header the only shot that truly tested either Brad Jones in the Liverpool net or counterpart Freddy Hall, currently on trial with Toronto FC.

It was all change in the second half, with 21 new players on the pitch after the interval. Fans were likely caught off guard as much as the Liverpool defence when the unfamiliar face of TFC Academy product Sergio Camargo went driving through the middle of the park after 58 minutes, and though substitute goalkeeper Peter Gulaski got a hand to his right-foot shot, he could do nothing to prevent Amarikwa gratefully slotting the loose ball into the open net.

But Liverpool, replete with the likes of internationals Joe Cole and Martin Skrtel in the second half, conjured up a reply 10 minutes later.

Raheem Sterling, the highly touted prospect who had been a menace down the left since coming on at half-time, got a yard on the Toronto defenders to get in a left-footed shot that squeezed past everyone, including second-half goalkeeper Quillan Roberts. It landed on the foot of an onrushing Adam Morgan and the scores were tied, much to the delight of the mostly pro-Liverpool crowd. 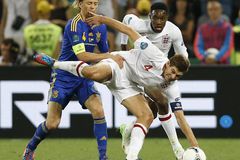 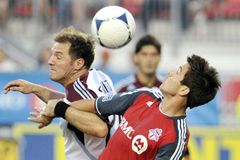 Follow Paul Attfield on Twitter @paulattfield
Report an error
Due to technical reasons, we have temporarily removed commenting from our articles. We hope to have this fixed soon. Thank you for your patience. If you are looking to give feedback on our new site, please send it along to feedback@globeandmail.com. If you want to write a letter to the editor, please forward to letters@globeandmail.com.
Comments