Zlatan Ibrahimovic powered in a late header to win the League Cup for Manchester United on Sunday, sealing a 3-2 victory over Southampton after a two-goal lead was thrown away by Jose Mourinho's side.

It was Ibrahimovic's second goal in the final after putting United ahead from a free kick, taking the 35-year-old Swede's tally to 26 goals in an incredible first season at United where his performances have more than lived up to the swagger.

That bravado was flaunted on the Wembley Stadium pitch amid the celebrations.

Asked by a television reporter if something special was unfolding at United, Ibrahimovic replied: "I came. That's special."

The free summer transfer window recruit ensured Mourinho became the first manager in United history to win a trophy in his first season, adding to his three League Cup triumphs with Chelsea.

"[It] is quite a sense of relief," Mourinho said.

United's fragile defence, though, nearly contrived to throw away the chance of glory. Although Jesse Lingard extended United's lead in the 38th minute, Southampton fought back with goals either side of halftime from Manolo Gabbiadini. But as Southampton pushed for its first major trophy since beating United in the 1976 FA Cup trophy, Ibrahimovic produced the bullet header in the 87th minute from Ander Herrera's cross.

Now Ibrahimovic has won a major trophy in a fifth country after honours in France, Italy, Spain and the Netherlands.

Although Wayne Rooney went up to collect the trophy as captain, that was his only role at Wembley. The 31-year-old forward was forced to watch from the bench as his older teammate produced an ageless, match-winning contribution.

"This is what I came for, I came to win and I am winning," Ibrahimovic said. "I have to keep going because the more I win, the more satisfied I get."

The striker didn't cost United any transfer fee when he joined in the summer transfer window as a free agent after leaving Paris Saint-Germain. He sought another final challenge, even in the twilight of his career, rather than an easy-pay day in an inferior league.

"You appreciate winning more the older you get, it's all about winning and collecting trophies," he said. "This is my 32nd trophy. Wherever I have been, I have won."

It was Southampton which had the ball in the net first, though. Gabbiadini beat goalkeeper David de Gea in the 11th minute only for referee Andre Mariner to overturn the goal, harshly penalizing Ryan Bertrand for being offside when the Southampton defender wasn't interfering with play.

Compounding the frustration was Ibrahimovic putting United in front eight minutes later by curling a free kick around the defensive wall past outstretching goalkeeper Fraser Forster.

United was living dangerously at the back though, and allowing far too much space for Southampton to push for the equalizer. De Gea sprang into action to block a low shot from James Ward-Prowse and he used his legs to deny Dusan Tadic.

United leading by one goal wasn't reflecting this contest, but Southampton fell further behind from another lapse.

Lingard was given so much time and space that he could take a touch to control Marcos Rojo's pass before slotting past Forster. Adding to strikes in the FA Cup final and Community Shield in 2016, Lingard now has three goals in three Wembley appearances.

Game over? Southampton had other ideas, sensing United's fragile defence was ripe for exploiting. And in first-half stoppage time, Gabbiadini produced the goal he had been denied earlier in the final.

Rojo was exposed again at left back as Ward-Prowse whipped in a cross that was met by Gabbiadini, who put the ball through De Gea's legs.

United's halftime response was to replace Juan Mata and place Michael Carrick as the shield in front of its defence.

But the Southampton goal threat persisted after the break, with Nathan Redmond's volley turned wide by De Gea and Claude Puel's team levelled from the resulting corner. Gabbiadini swiveled past Smalling to strike low into the net to make it five goals in three games since joining from Napoli.

There would be no hat trick as Gabbiadini was substituted and watched from the bench as Ibrahimovic had the final say as extra time was looming.

"(Puel) has reason to be really sad and disappointed because he did a fantastic work, his team did fantastic, his team deserved extra time," Mourinho said. "To lose in minute 87 with very little time to try to react, as they did in the first half, is a little bit unfair on them."

But it is United now on course for a treble, still in contention for the FA Cup and Europa League.

The bigger target, though, is returning to the Champions League through winning the Europa League or by finishing in the Premier League's top four. United is currently sixth.

In the day's only Premier League game, Harry Kane scored a first-half hat trick before setting up Dele Alli's strike as Tottenham moved to second in the standings, 10 points behind Chelsea. 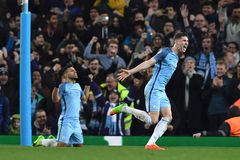 Champions League spotlight shifts from former champs to less-lauded contenders
February 20, 2017
Report an error
Due to technical reasons, we have temporarily removed commenting from our articles. We hope to have this fixed soon. Thank you for your patience. If you are looking to give feedback on our new site, please send it along to feedback@globeandmail.com. If you want to write a letter to the editor, please forward to letters@globeandmail.com.
Comments