Encouraged by a successful season in Canada, Major League Soccer plans to market itself more aggressively in this country, commissioner Don Garber announced during a visit to Vancouver this week.

The league signed a pair of Canadian television deals in January, renewing its rights with TSN while inking a new contract with TVA Sports in Quebec. Both deals will run through 2021.

MLS will also establish a national marketing group with the goal of drawing coast-to-coast attention to some of the circuit's marquee events, which include the playoffs, the all-star game and MLS Decision Day – the last day of the regular season, when several games are played at the same time.

"We're looking to figure out ways that we can grow our national television ratings," Garber said. "In order to do that we need to make the sport, our league, more relevant here and we need to make our clubs more popular in their local markets."

When the new TV deals were signed, Gary Stevenson, the president of MLS business ventures, said it demonstrated that the league, its Canadian teams and the networks "are investing in the growth of the sport in Canada."

The success of the Montreal Impact and Toronto FC in last year's playoffs gave the league's Canadian profile a boost, which translated into a sellout crowd of more than 60,000 at Olympic Stadium for the first leg of the semi-final between the two sides. Bell said the game drew more than a million viewers, the most ever for an MLS game in Canada. But that record was broken just days later in the second leg (1.4 million viewers) before it was topped again in the MLS Cup final, when 1.5 million fans tuned in to watch Seattle Sounders FC top TFC for the championship.

In order to grow that audience even further, and garner more sponsorship money, MLS plans to draw on a blueprint it has started to use in the United States – one that other pro sports leagues have employed with great success.

In recent years, North American leagues have put an emphasis on their showcase events to produce spikes of interest during extended regular seasons. Basketball has had success with its slate of Christmas Day games and its all-star weekend. Hockey has successfully made its outdoor games into big events, with four of them this season.

"It takes a playbook from the National Hockey League," Garber said. "They've done such a great job with their outdoor game and their Heritage Classic. All leagues need special moments. We have a long season."

The league isn't looking for growth solely in Canada. Since it was established in 1996, MLS has expanded from 10 to 20 teams, and this year it will welcome two more: Atlanta and Minnesota.

Twelve bids have been submitted for additional franchises, as the league pushes toward 28 teams by 2022. The bidders, ready to pay a $150-million (U.S.) expansion fee alongside stadium-development plans, include big-time sports money. In Detroit, for instance, Pistons owner Tom Gores and Detroit local Dan Gilbert, owner of the Cleveland Cavaliers, have partnered on a soccer bid.

But there are no expansion plans in Canada. Instead, MLS wants to make Montreal, Toronto and Vancouver more popular in their regions – and across the country.

"Our task," Garber said, "is to connect the dots between those three and create a national fan base." 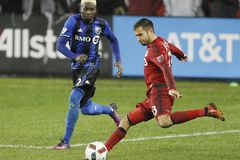 Two Canadian soccer players picked in first round of MLS SuperDraft
January 13, 2017
Follow David Ebner on Twitter @davidebner
Report an error
Due to technical reasons, we have temporarily removed commenting from our articles. We hope to have this fixed soon. Thank you for your patience. If you are looking to give feedback on our new site, please send it along to feedback@globeandmail.com. If you want to write a letter to the editor, please forward to letters@globeandmail.com.
Comments