After watching his squad give up a game-winning goal beyond the 80th minute for a third straight game, Toronto FC manager Ryan Nelsen promised changes are afoot.

Chris Wondolowski set up the tying goal and scored the winner late to lead the San Jose Earthquakes to a 2-1 victory over Toronto FC on Wednesday night.

Wondolowski scored in the 81st minute against Toronto (1-5-4), which saw its winless drought extended to eight matches and is now one spot off the bottom of the Eastern Conference standings 10 games into the season.

Nelsen, who expressed his disappointment with the overall effort of the team, revealed that a shake-up is coming to the lineup when the club returns to action after a bye on May 18 against the Columbus Crew at BMO Field.

"There's going to be changes," said Nelsen. "Player are coming in, hardened guys that know how to win."

Justin Braun scored in the 15th minute for Toronto from a free kick restart. A floated ball into the 'Quakes area was flicked forward by Donell Henry and fell nicely for Braun to volley home for the goal.

"We came in here trying to get the win," said Braun. "It was nice to finally get a goal on a play we have worked on all year, but it went down hill from there. It took their second goal for us to get back going the way we know we are capable of playing, but we need to be able to play that way no matter what."

The Earthquakes enjoyed a 59.5 to 40.5 per cent edge in possession for the match, including a nearly 2 to 1 advantage in the second half. From the time the equalizer was scored in the 48th minute by Adam Jahn and for long stretches of the half, the defence was under siege as San Jose mounted their comeback, which culminated with Wondolowski's fifth goal of the season.

"It typifies our season," said Nelsen. "Their first goal was so soft, a nothing play, and you just saw the confidence go out of the players. We've gifted goals every single game. It's demoralizing for everybody."

"They caught us sleeping early and made us pay for it," added defender Logan Emory. "We knew they were going to come out firing and they were able to catch us."

Coming off a 1-0 loss at Colorado last weekend, Nelsen made two changes to his starting line-up as Henry replaced Gale Agbossoumonde on defence and Braun replaced Hogan Ephraim on offence.

Going into the match Braun had scored four career goals against the Earthquakes.

After Braun's goal, the Reds settled into a solid defensive formation and withstood a lethargic San Jose side. The Earthquakes could have tied up the match in the 45th minute, as the TFC defence in unison appealed for an offside call on Wondolowski, but midfielder Shea Salinas missed badly from 10 yards out from goal. Emory earned a yellow card from referee Fotis Bazakos for dissent as he argued the non-call following the play.

The Earthquakes stormed out to start the second half and found an equalizer in the 48th minute on a sequence started by former Toronto defender Dan Gargan, who launched a throw-in to the area that Wondolowski flicked past Emory and to striking partner Jahn. The rookie forward settled the pass and slotted a left foot shot past a helpless Bendik rooted to the goal line to draw San Jose level.

The 'Quakes continued to apply heavy pressure, but the home side could not convert their chances. Toronto had little choice but to play with nine and sometimes 10 men behind the ball for long stretches of the second half. And when the run of play was not going their way, TFC were forced into ill-advised decisions that resulted in yellow cards to Matias Laba and Henry.

Toronto's propensity for allowing late goals came true in the 81st minute. A corner kick from San Jose was driven into the area by Chavez and flicked into the six-yard box by Walter Martinez for a poaching Wondolowski. The bane of Toronto for many seasons, Wondolowski volleyed the ball past Bendik to earn the Quakes a 2-1 lead.

In the dying moments of regulation, Toronto's offence came alive for the first time in the second half, and a shot from Henry looked destined to take the visitors level. Instead, defender Victor Bernardez made a desperation sliding save and the ball deflected skyward. 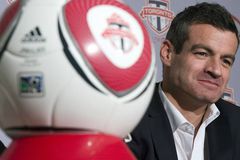