More than any of the current crop of players wearing the famous canary yellow jersey of the Brazil national soccer team, Neymar da Silva Santos Jr. is the face of the sport in his country.

It comes at a price though, as he's also inherited the mantle – some might say burden – of delivering his nation's record-extending sixth world crown in the shadow of Christ the Redeemer in Rio de Janeiro next summer.

Not that you would ever know he's weighed down by the hopes of nearly 200 million people. From sitting court side at a Miami Heat NBA game last week, to doing his best giddy-schoolboy impression on meeting the reportedly soon-to-be Sir David Beckham, Neymar looks every inch the normal, carefree 21-year-old he would be if he hadn't commanded a €57-million ($80-million) transfer fee to move from Santos to Barcelona last summer.

But having started his career at Pele's former club before his recent move to Europe, Neymar is well-versed in the long love affair Brazil has had with the World Cup, as the only country to feature in every finals tournament since the competition's inception in 1930.

"Our main goal is to win the World Cup," he said after a 5-0 exhibition win over Honduras in Miami last Saturday. "We know the pressure is on and that it is practically an obligation, but everyone knows how hard it is in a competition like that. We're training to win it, that's the dream and we hope we can make it.

"It's every Brazilian's dream."

As host site of next year's showpiece event, Brazil has qualified automatically, and having won the Confederations Cup in convincing style in the summer – knocking off defending world and European champion Spain 3-0 in the final – the South Americans will finish off the year fine-tuning their game in a series of exhibition matches, the last of which takes place Tuesday in Toronto, Brazil's first appearance in Canada since 1994.

But Chile, Brazil's opponent at Rogers Centre, where a grass surface has been laid down for the game, has locked down its own berth in next year's tournament, and is in no mood to play sidekick to the superstars of the Selecao, as Brazil's team is nicknamed.

Having seen off England 2-0 at London's famed Wembley Stadium last Friday, the Chileans are currently unbeaten in 10 games and, in forward Alexis Sanchez, a teammate of Neymar at Barcelona, the team has a genuine superstar of its own.

"He's in great form right now, and he's obviously very happy scoring two goals at Wembley Stadium …," Chile manager Jorge Sampaoli said through an interpreter. "I think he's one of the best players in the world. I think it's very important to realize that he's a player who makes a big difference for us and we hope that he can keep that level because he's really going to help us in future tournaments."

Sanchez, who has already scored seven goals for Barcelona this term, will have to be at his very best to give Chile a cutting edge up front and a chance against a team it has beaten just seven times in 67 attempts.

"I think that today, if we analyze Brazil you find, if you watched them against Honduras on Saturday, that it's very difficult to find a weakness," Sampaoli said. "It's a complete team, starting in the back with their defenders, they start the attacks."

But while the Chilean is full of praise for Brazil, he also knows things can evolve in a hurry in the ever-changing world of soccer.

"Right now, they're the best team," he said, "but there's a lot of time before the World Cup." 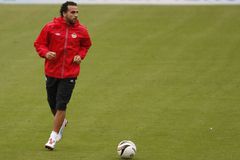