In public, FIFA says more women's soccer is essential – it is considered "an enormous growth opportunity." But progress has been slow, especially in elevating more women to decision-making roles in the sport.

A glaring finding of a FIFA survey released this year showed that only 8 per cent of executive jobs in national soccer organizations around the world are held by women.

That's especially true at the highest level, where there is only one woman on FIFA's executive committee, but 24 men. The single woman was a breakthrough, chosen in 2013, the first in FIFA's history.

Gender imbalance is also the reality in national federations. At the Canadian Soccer Association, for example, there are 11 men on the board of directors, and three women. The top executives are men, and among the five C-level officers for the Women's World Cup, there are four men and one woman.

Various efforts are under way to promote women to high ranks in the sport, and to direct more money to girls' and women's soccer initiatives. FIFA this week announced its first female leadership development program: Starting in early July, 35 women will attend three meetings, beginning in Vancouver around the final of the Women's World Cup, and work in the field for over nine months.

FIFA also requires member countries to spend at least 15 per cent of the development money it distributes on girls' and women's soccer. The actual spend is nominally higher, at 22 per cent.

Gains have been made in women's soccer since the first Women's World Cup in 1991, which featured 12 countries. This year, there are 24 teams. Still, the push for change is slow, and those who believe in it, and fight for it, speak cautiously.

"We know that we need more women to balance the decision-making," Mayrilian Cruz-Blanco, senior women's football development manager at FIFA, said in Vancouver on Thursday. "We have to see the change as positive, rather than be frustrated."

At the tournament's opening news conference in early June, which was overshadowed by the FIFA bribery scandal, the head of women's soccer for the association, Tatjana Haenni, said it was "about time" for women to have a greater role across society – and noted that soccer lags behind. She said women leaders and the women's game both need "much more support and development."

"Football seems to be one of the more difficult ones," said Haenni. "Personally, I think we should have more women in decision-making positions."

It is hoped that strong attendance at the Women's World Cup will help lead to professional women's teams in Canada that would join the National Women's Soccer League, which is in its third season with nine U.S.-based teams. There have been previous efforts to build women's pro soccer in North America, but they failed. The Canadian Soccer Association helps by financially supporting Canadians who play in the NWSL.

More than 700,000 tickets have been sold through the Round of 16 of the Women's World Cup. With seven matches left, 200,000 or more additional tickets could be sold. That would make the 2015 tournament the most popular edition yet – and the biggest FIFA event outside a men's World Cup, eclipsing the 2011 men's U-20 World Cup in Colombia.

On television, the tournament has done well. On Sunday, 2.8 million Canadians watched Canada beat Switzerland 1-0 in the Round of 16, the most-watched program on TV that day. By comparison, 3.8 million watched Canada and the United States in a 2012 Olympic semi-final.

About one-third of Canadians are following the Women's World Cup, according to a new Angus Reid Institute survey of 1,511 people, conducted online June 9-12. Forty per cent said they had no interest at all.

The survey found that there is demand for more coverage of women's sports, with almost three in four people agreeing. But respondents didn't think everyone would be interested. About half agreed with this statement: "In general, people are not interested in watching women play sports."

A ‘vicious circle’ plaguing the world of women’s soccer in Brazil
May 15, 2018 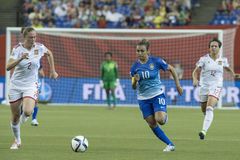 Doyle: Respect Brazil, Spain and their fight for promotion of women’s soccer
May 15, 2018 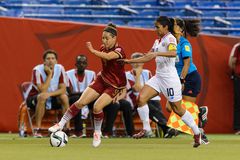 Kelly: Canada owes a lot to Christine Sinclair, but she isn’t the key to this tournament
May 15, 2018 Herdman denies rift in camp as Canada heads into World Cup quarter-finals
May 15, 2018 Canadian women in ‘touching distance’ of World Cup final
May 15, 2018 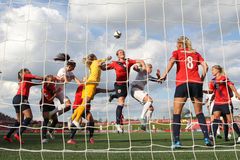 What makes Canada’s Christine Sinclair ‘a perfect leader’
May 15, 2018 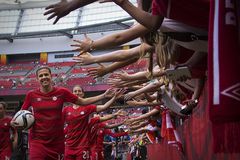