If the sloppy conditions and sparse crowd weren't bad enough, Toronto FC dropped a 2-1 decision to Sporting Kansas City on Saturday in a game Ryan Nelsen largely blamed on the officiating.

And a bad game ended on a worse note when the Toronto head coach and his assistant Fran O'Leary were ejected in the final minute for words said from the sideline.

"The referee [Allen Chapman] has a tough time but I think he'll reflect and look back and probably [realize] Toronto FC were on the wrong end of the equation on literally all of the critical calls," said Nelsen, who was calm just minutes after his ejection.

C.J. Sapong scored both goals for the visitors, while Darel Russell recorded the lone goal for Toronto in a rain-drenched affair at BMO Field, the gloomy, grey weather matching the mood around the Major League Soccer club.

The loss stretched Toronto's winless streak to eight consecutive games, while the victory for Kansas City propelled it into a tie with New York atop the Eastern Conference standings.

Nelsen was frustrated about what he thought was a hand ball in Kansas City's box, and a tackle on Justin Braun in the dying minutes.

"The problems that we did cause [for Sporting KC], an opposition's hand got in the way, or I think it was a little bit of the Ultimate Fighting that is going on tonight [at Toronto's Air Canada Centre] was done on Justin Braun at the end," Nelsen said. "I should be up here [talking about] two penalties, two blatant penalties, two stonecold penalties, and we've won the game."

A week after Toronto (4-14-12) was mathematically eliminated from the playoffs for the seventh straight year, and with four games to go on the season, a sparse crowd — announced at a season-low 12,627, but appearing much smaller — braved the inclement weather.

The previous season-low attendance was 15,217, two weeks earlier versus Chicago.

Toronto hasn't won since Aug. 4 at New England, and despite which way the referees' calls went, a couple of defensive miscues led to what Nelsen called "soft goals" for the visitors.

Sapong opened the scoring for Kansas City (14-9-6) in the 18th minute when Graham Zusi found the head of Dominic Dwyer with a long cross. Dwyer headed the ball to a wide-open Sapong who launched a header past Toronto 'keeper Joe Bendik.

"It wasn't going to be a performance game, atrocious conditions, you probably can't see it from the sideline but when you're out in the middle the water is horrible," Nelsen said. "It was going to be a mistake game, whoever turns it over and whoever makes mistakes is probably going to lose the game."

Sapong, who'd only scored twice previously this season, doubled his season output in the 53rd minute when he headed in a long cross from Chance Meyers. Defender Mark Bloom, in his second appearance for Toronto, seemed to lose sight of Sapong as he was tracking him back toward the net.

"Soft goals for us to lose," said Toronto defender Steven Caldwell. "It was a not very nice day to play in or watch it was a battle at end, it was difficult to keep your footing, play with any kind of quality."

Russell scored in the 38th minute to make it 1-1 on a bad clearance by Kansas City defender Aurelien Collin. Sporting KC goalkeeper Jimmy Nielsen passed the ball to Collin, who misplayed it leaving Alvaro Rey to swoop in and pass to Russell, who slotted it past Nielsen.

The loss came a day after Toronto introduced Tim Bezbatchenko as its new general manager. Despite all the frustrations from Saturday's match, Nelsen was emphatic in his support for the recent turn of events in the front office.

"When I first took this job and I saw what happened to where I sit now, oh my goodness, trust me on this one, I am so much happier, it's absolutely night and day," Nelsen said.

"Certain contracts with certain salary cap restrictions. . . ," he said, when asked to expand. "Everything was handcuffed and we've taken the handcuffs off and now we can move forward.

"When I first took the job I thought it would be two or three years before Toronto could get out of the situation they were in, it was that bad."

Saturday's game was a winnable one for Toronto, which had several near-misses on the afternoon.

Rey went down on the edge of the 18-yard box in the first half after taking what looked like an elbow to the face. The referee awarded Toronto a free kick outside the box, which Caldwell nearly scored on.

Toronto had another excellent scoring chance at the 45-minute mark when a header by Bright Dike — who was strong in his first start for the home team —was cleared off Kansas City's goal line.

Toronto was reduced to 10 men in the 86th minute when Caldwell was shown a red card for a studs-up tackle on Josh Gardner.

"No intent or anything malicious about it, it's just the way the game was, and the type of conditions it was, sometimes you go in for challenges that aren't ideal and I felt we both went in with our studs," said Caldwell.

He chalked up the calls to a "lack of experience from the referee, and a lack of empathy for the conditions."

Toronto was missing several key players including midfielder Jonathan Osorio, who was serving the first of a two-game suspension for kicking the ball at an opponent's head in Toronto's 2-0 loss at New York last week.

Osorio booted the ball directly to the side of the head of Red Bulls defender Kosuke Kimura, who had fallen to the ground. Kimura was not injured on the play.

Striker Robert Earnshaw missed the game with a hamstring injury. Danny Koevermans, who's struggling in his recovery from last season's ACL surgery, didn't dress, nor did Matias Laba, who's out a month after fracturing his big toe. 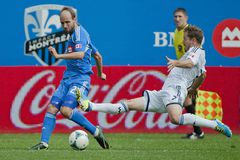 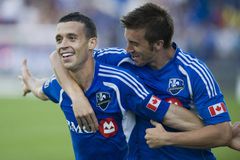 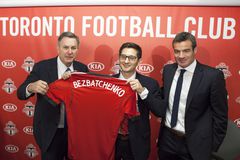