What happened on Wednesday in Egypt - dozens dead and at least 1,000 injured in Port Said, when a field invasion followed a soccer match between teams Al-Masry and Al Ahly – is not about a game but about public space and political tensions.

It's really not about soccer but about the role of the soccer stadium as place for releasing rage, frustration and anger.

In all the soccer games I've attended, in 15 countries across four continents, I've never felt afraid. Not once. During a decade of covering soccer, the days of soccer hooligans, riots and unsafe stadiums appeared gone, lost in a past that nobody in soccer wants to return to. But soccer is the world's game and the world is a big, changing, dangerous place.

What I attended were mostly tournament games between national teams, events organized and regulated by soccer's governing body, FIFA, or its European equivalent, UEFA. Club soccer is different. In repressed countries there are few places where masses of people can gather regularly. In many places soccer stadiums are the only venues aside from a church or mosque where crowds congregate without fear of riot police or soldiers. Soccer is played on the field but, more crucially, it is sectarian and political rivalries that play out in the stands.

No soccer fan need try to explain what happened in Egypt by apologizing on behalf of the game. It is a truism that soccer explains the world and in this instance the tinderbox that is Egypt right now is explained by terrible events in a soccer stadium. As James M. Dorsey, a senior fellow at Nanyang Technological University's School of International Studies, says in the introduction to his blog, the Turbulent World Of Middle Eastern Soccer,

"Alongside the mosque, the stadium was until the Arab revolt erupted in late 2010 the only alternative public space for venting pent-up anger and frustration. It was the training ground in countries like Egypt and Tunisia where militant fans prepared for a day in which their organization and street battle experience would serve them in the showdown with autocratic rulers."

It is also a truism that any team-sports contest is a sort of ritual combat onto which are projected complex rivalries between towns, tribes and even nations. But in soccer the complexity is even richer. It is hard for a fan of North American professional sports to grasp, but in most countries soccer clubs are not franchises owned by faceless corporations who might move the team and abandon the stadium in the right business circumstance. Clubs, such as those in Egypt, are rooted in small neighbourhood organizations going back decades or longer. The fans have an authentic stake in the club. They are club members, owners and not merely followers.

There are the ills that bedevil soccer – the corruption, the match-fixing in some countries, the preying of wealthy European teams on small impoverished clubs in small countries – but away from all that soccer can be distilled to what is does as a social function. It is a venue and outlet for raw identity politics. Sometimes joyous, sometimes deadly.

In a way, Egypt is the soccer world in microcosm - place where soccer clubs essentially replaced political parties during years of political repression. The clubs became stand-ins for movements and instruments for expressing beliefs and attitudes.

One of the clubs playing in Wednesday's game, Al Ahly, has a storied place in recent Egyptian history. Al Ahly has long been the arch-rival of the club called Zamalek and, as every Egyptian knew, Hosni Mubarkek and his family supported Zamalek. Al Ahly came to represent "the other", the opposition to Mubarek. Before the revolution that originated in Tahrir Square a year ago, matches between Al Ahly and Zamalek were the expression of all of Egypt's smothered tensions.

Such rivalries with political, social and religious undertones happen all over the world. In Glasgow, Scotland, the rivalry between Glasgow Celtic and Glasgow Rangers is the expression of old hatreds between Catholics and Protestants. Throw in the perception that Celtic supporters were biased in favour of Sinn Fein and the IRA in Northern Ireland, and the rivalry has often been toxic. In Spain, the rivalry between Real Madrid and Barcelona is drenched in legend that Real was Franco's team and Barcelona represents both the left and Catalan nationalism.

This is not like Toronto Maple Leafs fans enjoying a rivalry with the Montreal Canadiens. At soccer games, attended by perhaps 70,000 or 80,000 fans, a mocking, provocative chant from one set of supporters can unleash terrible, violent reaction. In places like Egypt, where security in stadiums is paltry or negligible, a riot is inevitable when politics is everywhere and the future of the country is up for grabs.

Soccer is not what triggers violence such as that in Egypt. It is the venue and the dynamics of the crowd that heightens sectarian, ethnic and political passions. Soccer is only a game. The future of Egypt is not a game and, accordingly, in a place rife with tension, horrifying rage, violence and death can happen. This was not about men chasing a ball across the green grass of a field. 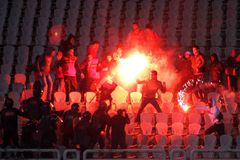