Early morning here and a sea of green floods Lech Walesa Airport. Ireland's supporters are arriving for tonight's match against Spain, a do-or-die game for both teams.

Spain's 1-1 tie with Italy made for lovely, nuanced soccer for long stretches. Spain held possession of the ball, as it always does, with patience and confidence. But manager Vincente Del Bosque's decision not to start with one of his available strikers - Alvaro Negredo, Fernando Torres or Fernando Llorente – made for a subdued Spain anywhere near Italy's penalty area. All possession, no positivity about goal-scoring. A mere draw seemed less than Spain was capable of achieving.

Ireland's 3-1 defeat to Croatia, in a game that had no rhythm and where Ireland's famously rugged defence went feeble, was a startling collapse. To gain anything in this tournament, Ireland must avoid defeat by world champions Spain and, in a few days, an obviously skilled Italy.

In the brief confusion of hundreds of people seeking taxis and buses, I find myself standing beside three young Irishmen. Ger, Dermot and Leo. "What's your prediction for tonight?" I ask them. All hesitate. "Very hard to tell," Ger says and Dermot nods. Leo is having none of it. "I still say we'll get a result," he says, glancing defiantly at his friends.

What kind of result? "A nil-nil draw or 1-1. That's possible. The match against Croatia was a bit mad. A soft goal at the start and the lads were nervous. It was unusual. I hope we get something anyway. People at home are very down about the team now."

He's right. Pundits in Ireland have begun floating the term "irrational exuberance" to describe Ireland's high hopes going into this Euro. Some says the irrationality of the exuberance followed by dashed expectation leads to a kind of despair. The Irish are feeling it, en masse, apparently.

"No disgrace in losing to Spain, though?" I suggest to the three Irishmen. "No, they're good. Great supporters too," Leo says.

Ireland's supporters rarely denigrate an opposing team. And in the context of this game, there is considerable connection and affection between the two countries.

Last weekend, Euro zone finance ministers agreed to lend Spain up to 100 billion Euros to prop up its banking system. It's a scenario, humiliating and foreshadowing severe austerity measures, that Ireland has already experienced. Its economic sovereignty gone and its banking system revealed to be a mess. There is high youth unemployment Spain as there is in Ireland and emigration is a reality for many.

But there are personal connections too, away from any economic paradigm.

Every year thousands of Spanish teenagers go to Ireland to learn or improve their English. It's a traditional journey, one that dates back to the 1960s when a more conservative Spain saw deeply Catholic Ireland as a safe place for its children. Many households in Ireland's towns and cities hosted Spanish kids and made some extra money from the program in hard times.

One of those who made that journey was Xabier "Xabi" Alonso, the Spain, Real Madrid and former Liverpool midfielder. As a teenager in the mid 1990s he spent months in the Irish town of Kells. There was wasn't much soccer played in the area, so Alonso took to playing Gaelic football with the local team.

"I played Gaelic football with some of the local boys. It was very fast, very tough. Maybe they should wear crash helmets," he said in an interview with an Irish newspaper when he played for Liverpool. He also claimed that the experience not only improved his English but prepared him for the physicality of the English premier league soccer.

That acknowledgment of his Irish experience has made Alonso a favourite of Irish fans. But nobody is expecting Alonso or Spain to show affection for Ireland on the field tonight. There may be connections and warmth, but this is Spain's era in world soccer. As the country is wracked by economic woes it has that one defining consolation.

Euro champions in 2008, World Cup champions in 2010, Spain can achieve immortality in the world's game by winning a second Euro. It stuttered at the start of the World Cup in South Africa. Maybe it hasn't found its groove here. Yet.

As I write this the sound of Spanish drums being pounded is beginning to fill the streets of Gdansk. Spain is fully expected to pound Irish expectations tonight, and rightly so. It's not irrational to know that affection only goes so far when a win is desperately needed. 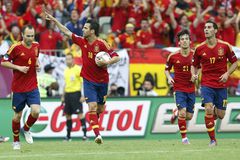