Told ya: Cristiano Ronaldo marooned somewhere on the left side of things and isolated to the point where his non-participation in the penalty shoot-out summarized his evening. Non-participation.

Spain succeeded is neutralizing Portugal's main threat but in doing so exposed all its weaknesses – utter failure to transcend its mesmerizing possession game and play penetrating soccer when chances arose.

There is an awful lot to admire about this Spanish team yet Spain goes into the Final of Euro 2012 not with a bang, but with a whimper. If the World Cup in 2010 was Spain's tournament to win and put its indelible mark on the game, this is Spain's tournament to inevitably lose, likely to Germany, for lack of attack and lack of a striker trusted with making that final, telling move to actually hit the target and score.

Up until now, Spain's lack of striker David Villa, through injury, seemed neither here nor there. Against Portugal, the absence of a conventional striker was glaring. And such exhausting concentration on stopping the opposition illuminated Spain's limitations. This was a Spain more chilling than thrilling.

It's not that Spain plays boring soccer. That accusation is facile. And rather like asserting that a tweet on Twitter is more attractive than a sonnet simply because it's short, sharp and unsubtle. A sonnet's intricacy of connected rhythm is itself a thing of beauty. There's beauty in Spain's movement, possession and elaborateness. But there's something cold about its lack of passion.

Portugal deserves enormous credit for perseverance and creativity in pushing Spain back for long periods. For much of the first half, Spain looked jumpy. Perhaps happy, to limit Ronaldo, but deeply unsure of how to do much else.

Spain's gloriously elastic formation allowed it to seamlessly move to have as many as five defenders lurking whenever Ronaldo seemed to be steaming in from the left side. As a tactic against Ronaldo's individualism this was almost noble and vastly preferable to the standard practice of hacking at his feet or pulling him to the ground.

It was Portugal that proved the more physical team but admirably more interested in taking possession of the space in midfield than assaulting Spanish players to unsettle them. The assertion that Portugal is in essence a team of servants to Ronaldo was proved untrue again as Nani, Veloso and Moutinho were superb at unsettling Spain, claiming that space and causing Spain to accrue an unusual number of failed passing movements.

Up front for Spain, this guy Negredo, ostentatiously unveiled as Spain's surprise striker, was obviously just a perambulating diversion. He drew Portugal defenders away while Andrés Iniesta and David Silva bossed the ball in the Portugal area. But that only lasted a short while. This was one of those games that had overtime and penalty kicks written sill over it after an hour. Fernando Torres, so often introduced by Spanish manager Vincente Del Bioque at around the 60-minute mark in this tournament, looked a tad forlorn as it became clear he was going to make zero contribution.

And there's the rub. Spain cannot finish off a game, for all its complexity of passing and dominance. There is a faded-beauty quality to Spain now. It was the gamble of the penalty shoot-out that got it into the final, not finesse or the sublime finishing that made it so attractive at Euro 2008 and the World Cup two years ago.

Then, Spain seemed impregnable, the charisma undeniable. An oppositions' only answer appeared to be the deplorably blunt tactics of the Netherlands in the World Cup Final. Now it all looks a lot less impregnable. Portugal's heart and perseverance in p laying high up the field against Spain proved astute. The result was Iniesta having a small handful of chances for Spain, most of those from distance.

Now Spain will take on either Italy or Germany in the final game. On the evidence of this exhausting, drawn-out win, Spain is likely to have serious problems with Andrea Pirlo's imperious control from the get-go or the eccentric, on/off dexterity of Mario Balotelli at his best. The more likely scenario, though hardly certain yet, is that Spain is easily flummoxed by Germany's vast array of strikers supplied by the uncanny passing of Mezut Ozil.

It's one thing to nullify Ronaldo. It's quite another to negate the nuance of Italy or the dynamism of Germany. 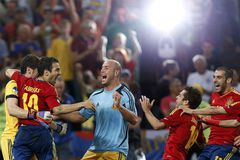 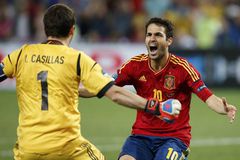