There's a theory going around about Spain and its style of possession soccer.

Ok, maybe this theory is not widely promulgated. Maybe it was yours truly and a distinguished professor of literature at University College Dublin who cooked up this theory. But it has some legitimacy and force.

And it seems particularly apt to introduce it after Spain's bizarrely blithe 2-0 victory over France. Especially since France seemed to throw all its talent at Spain and still emerge looking like it was playing by a separate set of rules and ideas of nuance. In a different class, to be specific.

Class is what matters in this theory. Not class as in quality of play, but class as in the structure of society.

Spain's game is the triumph of middle-class soccer. Its method is anchored in comfort with possession of things, specifically the ball and control of the game. Just as the middle-class – the bourgeoisie – essentially define conformity and orthodoxy in most societies, but emphatically in western European societies. Bourgeois life is essentially about custody of goods and occupancy of position in society.

This is also what Spain does now. It doesn't even be bothered with putting strikers on the field to grab goals. Can't be bothered because possession is what's important – holding the ball – and it is the definition of its existence.

Soccer can be a very, very simple game. Putting the ball in the net is the end result of everything that happens on the field. Or, as it is so often said in English language commentary, "grab a goal."

The "grab a goal" method is, in essence, a very proletarian approach. It's all about grasping for what isn't already owned but has allure.

By traditional definition, the proletariat is the social class of people who do not own or control the means of production. They only possess the capacity to sell their labour, and generally the labour is sold to the middle class who do not need to strive or labour, but control not only production, but the rules by which possession and success are defined.

On the soccer field, Spain possesses while others labour and strive.

The defining element of Spain's style is comfort with possession. This is what stymied France and what defeats all other teams even before the game has begun. This French team under Manager Laurent Blanc had no answer to Spain's instinctive possession of the ball and governance of space on the field.

France fielded defensive line-up, against a Spanish team that was actually lacking in direct offence and as a result conceded the ground and possession of the ball from the start.

Although anticipated as a clash of formidable European teams, both having technically gifted players in abundance, the game was reduced to farce. Spain possessing, and France chasing, often absurdly.

Call it high-falutin', but a good deal of the basis for this class theory about Spain is the fact that the history of soccer as an organized, regulated and popular sport runs parallel to the rise and decline of much left-wing theory about economics and society.

At around the time that soccer was begat as a sport, Karl Marx was forging his theories about labour and economics. Marx believed in the inevitable triumph of the proletariat, based in the inherent energy and number of labourers. As it turned out, Marx was wrong and as recent history has shown – a history that, ironically, unfolded where this Euro 2012 tournament is being played – what is inevitable is the triumph of the bourgeoisie.

Call it consumerism or call it the succor that comes from proprietary hold on what makes life easier, but it's the urge to be middle class that demolished Communism. Now perhaps it has demolished traditional, run-and-chase soccer.

Spain doesn't run and chase. It simply holds on to what matters. It controls, it owns.

At last night's game there was at times a palpable boredom setting in among those in the stands. There were some empty seats and the Mexican wave broke out. That only occurs when there's nothing to look at in the field of play. Mind you, maybe what was happening wasn't boring at all, but history unfolding – the end of soccer as a proletarian game and the inculcation of soccer as an entirely bourgeois game.

Just a theory going around. And it doesn't matter how plausible it is – Cristiano Ronaldo will have something to say about it when Portugal plays Spain in the semi-final of Euro 2012. 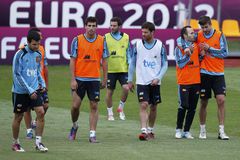 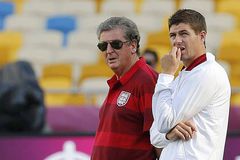