The significance of his goal was not lost on TFC striker Jozy Altidore.

As soon as the Philadelphia Union defender allowed him a second chance at the ball in the 85th minute Wednesday night and Altidore blasted the insurance goal into the net, he leapt into the south stands at BMO Field, home of TFC's most ardent fans. Altidore was followed by several of his teammates as they and their supporters jumped up and down, literally shaking the MLS playoff monkey off their backs.

A few minutes later, with the 3-1 win over Philadelphia in the single-game knockout round secure, the TFC players lingered for an on-field celebration with many of the 21,759 fans who stayed loud throughout a cold, windy night. It was TFC's first playoff win after 10 years in the MLS, it came at home and they were going to celebrate.

"Yeah, that's the reason for it, to give every person inside the stadium tonight a taste, players, fans, everybody, that just says listen, we leave everything on the field for the badge of the club and for you guys," said TFC midfielder Michael Bradley, who played a strong defensive game behind the offensive brilliance of strikers Sebastian Giovinco and Altidore. "You guys, as we've said, make an atmosphere that makes the difference for us and if you continue to help us and we continue to leave everything on the field for you guys it's only going to continue to be more fun."

That was the next thing the TFC players emphasized: this was just the first step, that breaking a long hex was not going to be an excuse to relax. Next up is the two-leg MLS Eastern Conference semi-final against New York City FC, which begins Sunday at BMO Field.

"For tonight, every player, every person who's part of this club, every fan, every person in Toronto who supports us should enjoy it and then starting tomorrow morning we have to get ourselves ready for two tough games against a good team," Bradley said.

Of course, a reminder of what happens in the playoffs when the effort is lacking is not far away for TFC. It was just a year ago that they played badly in the knockout round after finally making the MLS postseason and were bounced by their strongest rival, the Montreal Impact.

"We're all very aware it's the first step in this process," TFC head coach Greg Vanney said. "The speed of the game, the tension of the game was just a different level than any of the regular season games we participated in.

Actually, it took a while before TFC set the tone. The Reds allowed the Union to carry the play in the first seven minutes, something they were guilty of many times in the regular season.

However, this time the TFC players managed to take control of the game before the opposition could score the first goal. Giovinco and Altidore took charge offensively, with Altidore coolly flicking a pass to Giovinco for the game's first goal in the 17th minute.

The Union did not get a decent scoring chance in the first half and the crowd exploded again early in the second when hometown lad Jonathan Osorio scored to put the hosts ahead 2-0. It was Osorio's second goal in as many games.

But there were a few tense moments ahead as the Union's Alejandro Bedoya cut the Toronto lead to 2-1 late in the game. But 12 minutes later Giovinco and Altidore combined for the third goal to get the fans jumping and singing again.

"It's fun to watch, I'll tell you that much," TFC defender Drew Moor said of the wizardry of Giovinco and Altidore. "I can't watch too much of it because I have to be organizing behind the ball.

"It's one of the main reasons I came here, to play with guys like Sebastian Giovinco, Jozy Altidore and Michael Bradley, and that's just a short list."

The game was played at a fast pace throughout the 90 minutes with a healthy dose of aggression. This led to yellow cards from referee Baldomero Toledo to four players, including Bradley and Altidore. Since MLS rules call for a one-game suspension for two yellow cards in the playoffs, they will have to play carefully against New York.

"It's a playoff game, it's hard and fast, there's contact and there's fouls," Bradley said. "I personally didn't like the way [Toledo] handled the beginning of the game. Obviously that meant that I ended up with an early yellow card.

"It's not ideal but not the first time. You still have to play and compete. There are certain plays where you have to be a little careful but you can't let it change who you are."

While TFC as a franchise is new to the playoffs, players like Bradley, Altidore and Giovinco, who were not around for most of the lean years, have seen their share of big games. And Bradley thinks Wednesday's game was a valuable education for all of his teammates.

"I think the experience now of having played in this game, a one-off, a do-or-die game, it's invaluable," he said. "New York City doesn't have that." 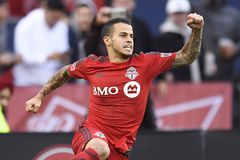 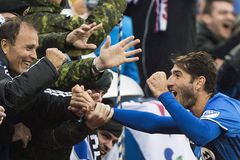