More reinforcements are on the way for Toronto FC.

Tuesday's moves came a day before Toronto (1-4-4) faced the Earthquakes in San Jose – a game in which Toronto was hoping to finally nab a win after coughing up too many.

The 32-year-old Caldwell, who's on loan with Toronto until July, spent the past two seasons with Birmingham City of England's League Championship, scoring two goals in 90 appearances.

"He's a proven defender with great experience," Toronto president and GM Kevin Payne said. "We expect him to help shore up our defence."

Brockie, 25, joins Toronto FC after spending the past season with Wellington Phoenix of Australia's Hyundai A-League, playing in 24 matches and scoring 16 goals to finish second in league scoring. Brockie has 32 career goals in 98 A-League matches.

"Ryan. . . speaks very highly of him," Payne said. "He'll provide another option in an attacking position and if he can continue his form from the last A-League season we'll be happy indeed."

A TFC official was uncertain whether either Caldwell or Brockie would play versus the Earthquakes (2-3-5).

Regardless, the team could definitely use help whenever it arrives. The season has turned into Groundhog Day over the past few weeks as Toronto has given up costly late goals in four consecutive MLS games. The most recent was Saturday's 1-0 loss to the Colorado Rapids when TFC defender Logan Emory fell down leaving Edson Buddle wide open in front of the net for the winning goal.

Rather than lament the points they've given away, assistant coach Fran O'Leary said he was buoyed by how well the team has played.

"Disappointing result but a very good performance in Colorado," said O'Leary. "We're about to face a terrific San Jose team. Hard place to go and get a result. But if we carry on the performance from the other night, results will start coming around pretty quickly."

Almost as frustrating as the late goals were the scoring chances Toronto has failed to capitalize on. Robert Earnshaw fired two wide-open shots over the net in Colorado.

"I think the difference a lot in this league is in both boxes," Earnshaw said. "I thought we defended very very good the other day (versus the Rapids), and probably the other end we should have scored at least two goals which probably should have sealed the game. We've just got to be ready and be more ruthless in front of the goal."

Earnshaw said, despite the frustrating results, the mood around the club remains upbeat.

"Overall we've just got to be positive," the striker said. "The hardest thing to do is be down, and dwell on the result. Overall if we're positive I think we'll get a good result."

Toronto is ninth in the 10-team Eastern Conference. Had a couple of those draws been wins, they'd be in the top-five.

Still, for all the points the squad has coughed up, Toronto is still way ahead of its wretched record at this time last year.

Nine games in, team was a woeful 0-9 last season – an MLS record for worst start. Then-coach Aaron Winter was just one game away from being fired.

"I think he's a young player, smart player and talented," teammate Luis Silva said of Laba's debut last Saturday in Colorado. "Of course, Colorado isn't not one of the best places to go out and have your first game, but I think he did well."

Caldwell began his professional career with Newcastle United and has spent time at Blackpool, Bradford City, Leeds United, Sunderland, Burnley and Wigan. He signed with Burnley in January of 2007, and captained the team to promotion into the English Premier League. After leaving Burnley, Caldwell spent a season at Wigan before signing with Birmingham City in July of 2011.

Caldwell has earned 12 caps for the Scottish national team.

The 25-year-old Brockie has 35 caps with New Zealand, and was a member of the squad that played at both the 2008 Olympics and 2010 World Cup.

Impact gives TFC six of the best to advance to Canadian Championship final
May 1, 2013 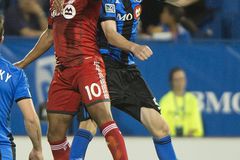