Califf, the Union's first ever captain, is flying in his family from California to see the game at PPL Park in suburban Philadelphia. There will also be plenty of friends on hand.

"I'm excited. I've got a big crew coming to the game," said the 33-year-old Califf, who has fond memories of his time in the City of Brotherly Love.

Califf is just happy to be healthy after a stomach virus that laid him low in advance of last week's 2-2 tie with visiting FC Dallas. He spent most of last week "curled up in a fetal position," with toast the only food item that would stay down.

He returned to training Tuesday, still looking a bit under the weather. But he was back to his old self Thursday, with a broad grin bisecting his flamboyant sideburns.

Last Saturday, 21-year-old Gale (pronounced Gal-E) Agbossoumonde filled in for the ailing Califf and acquitted himself well in his MLS debut for Toronto (1-2-2).

No one is saying who will start this week.

Toronto manager Ryan Nelsen has already demonstrated that he is swayed by performance, not resume, when it comes to team selection. But choosing to retain Agbossoumonde (1 game) over Califf (211) would be a bold move, especially when Nelsen is expected to have to make changes in the backline with fullback Richard Eckersley (hamstring) doubtful.

Still, Nelsen is not afraid to give youth its due.

Goalie Joe Bendik has taken advantage of Stefan Frei's broken nose in pre-season to stake his claim as the club's No. 1. Midfielder Luis Silva, sidelined by a hamstring, has also made a seemingly undeniable case to get back in the starting 11 with two impactful substitute appearances.

"This is what happens in sport," said Nelsen, speaking generally. "You get injuries, sicknesses, illnesses, something — and when an opportunity arises, you've got to take it.

"To be fair, the guys who have come on have really taken their opportunity, which is really pleasing."

Nelsen said his team selection will be based on "what I think will get three points."

While Califf has also played for Los Angeles, San Jose and Chivas in MLS, his two-plus seasons and 61 starts in Philadelphia — after four years playing in Denmark —remain special.

He was there from the team's first kick in 2010, wearing the captain's armband.

"I got to get a chance to be part of building something," Califf explained. "And to just have a connection with the city. I liked the blue-collarness of the city. I think it's similar to Toronto, in that respect certainly. And that kind of working mentality kind of fits who I am."

Califf says he expects the fans to heckle him, adding "but they do that because they like me, I think."

Union coach John Hackworth expects his fans to welcome Califf back to Philadelphia (2-2-1).

"I think he'll probably get a lot of respect, because Danny is the kind of class individual who has earned that — especially from the fans here," he told Philadelphia reporters this week. "I think the fans here appreciated the way he handled himself as a pro and a person, on and off the field.

"So I would expect that the fans here will pay tribute to Danny. I would like to say the same from our end, but he's wearing the wrong jersey on Saturday. So until after the game, although I like Danny a lot, he's in the wrong jersey for me."

Califf is also good friends with 31-year-old Philadelphia striker Conor Casey. The two roomed together at the 2000 Olympics.

"It's fun. It's always a battle when we go up against each other," Califf said. "Big bodies banging around. Lots of beef."

"My family loved it, so it made it easy," Califf said of Philadelphia. "We didn't always play well or anything like that bit with everything outside the field being good, you don't walk off and kill yourself all day."

If the city embraced Califf, coach Peter Nowak didn't when push came to shove and eventually traded the defender to Chivas USA in May 2012 after just four appearances that season. Nowak was fired soon after.

Toronto lobbied to get Califf when the Union made him available but the defender not surprisingly chose Chivas. The move allowed him to move back into the family's California home, which had been rented out. Plus Toronto was suffering through a league-worst start to the season.

Chivas proved to a franchise looking to rediscover its Hispanic identity and Califf was made available in the 2012 re-entry draft where Toronto snapped him up.

"That was the first thing I think three-quarters of the (Toronto) guys said that was their memory," Califf said with a smile of his introduction to TFC.

On the field, Califf is no Usain Bolt but has the experience to anticipate where he should be. He also knows his role.

"My job is to win the ball and give it to the guy that gets paid to make the game," he told a coaches convention in October 2011.

These days, that job comes with a cost. After some practices, he wears enough ice to make daiquiris for the entire TFC starting 11.

Califf is literally a colourful character. Both arms are covered with tattoo sleeves and his torso is a shrine to his three kids: daughter Paige and sons Blake and Jude.

Califf's family has not joined him in Toronto yet because his kids are still in school. They are due to join him in mid-June but also plan to take in Toronto games in San Jose and Colorado.

NOTES — Midfielder Terry Dunfield (knee) and forward Emery Welshman (ankle) are definitely out. Dunfield is expected to be out for at least three weeks while the team's medical staff awaits to see how a sore knee responds. 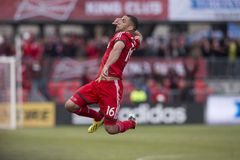 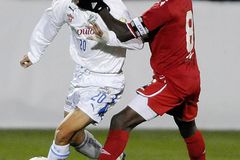