Just not for Toronto FC, the club that has invested more than anyone into its three designated players ($18.3-million U.S. this year).

Toronto FC fans have waited nine years to see their team play in the postseason, but they'll have to wait at least one more to see it win there. The Montreal Impact won the single-game playoff knockout 3-0 on Thursday night.

The atmosphere for the first all-Canadian MLS playoff match was equal to the occasion despite a smattering of empty seats.

The small contingent of travelling supporters wedged into a half-empty section in the northeast corner of Saputo Stadium had early cause to cheer as their team controlled play.

Impact striker Didier Drogba, another of MLS's big earners, had said after last weekend's regular-season finale between the teams – a 2-1 Montreal win that sealed home field for Thursday's playoff rematch – that TFC "is the better team on paper."

On the pitch? Not this night. Montreal scored three times in the first half, and it could have been worse.

"We found ourselves up against it quickly … we just got outcompeted in the first half," Toronto coach Greg Vanney said.

Montreal advances to face the Columbus Crew on Sunday, while TFC undertakes a winter of contemplation and rues what might have been.

"I thought we were tentative, we were a little bit hesitant maybe to close people down, to get tight to people. We were second to loose balls … and we made some poor decisions defensively," Vanney said.

It would be easy to consider Thursday's game as a referendum on TFC's off-season spending, the bulk of it on Giovinco and Altidore, but the fact is Toronto ran into a threshing machine at Saputo Stadium.

"One of our best performances of the year," Impact coach Mauro Biello said.

It was piloted in turn by the industry of hometown midfielder Patrice Bernier, silky Argentine forward Ignacio Piatti and – him again – Drogba.

Toronto's game plan evidently centred on smothering Drogba and Piatti. TFC can be forgiven for not devising a specific strategy for Bernier.

The 36-year-old veteran was exiled to the end of the first-team bench as recently as August. Since coach Frank Klopas was fired eight weeks ago (after a loss to Toronto) and replaced by his assistant Biello, Bernier has enjoyed a renaissance of sorts, mostly from the bench.

Biello said he decided after Sunday's game Bernier should start. It was an inspired tactical move.

Bernier signalled early that he'd come to play, committing a nice bit of thievery on Bradley in the centre of the pitch in the seventh minute that set off a counterattack.

By then, Piatti had already won a free kick wriggling down the left. Shortly afterward Giovinco got his first look at goal on a ball over the top, although Evan Bush was equal to the task in the Montreal goal.

In the 19th minute, Montreal counterattacked from its own penalty area.

Nigel Reo-Coker slid a pass just beyond the outstretched foot of Brazilian midfielder Jackson; Piatti romped forward and sent a delicate ball in behind defender Josh Williams, which Bernier latched on to and walloped low to Toronto goalie Chris Konopka's left and into the corner of the net.

The huge silver bell set up behind the visiting net began to toll as Bernier thumped his chest.

Fifteen minutes later, Piatti made it 2-0 when he pounced on a defensive miscue – Williams slipped just as Ahmed Kantari passed the ball to him across the top of the 18-yard box.

And five minutes after that, Piatti was again instrumental in the build-up as Bernier took a through-ball and skimmed a left-footed pass through four defenders to Drogba. The former Chelsea striker, forced from the field earlier after taking a knock, calmly side-footed his 12th goal in as many games since coming to North America this summer.

In the second half, TFC again started with purpose, and Giovinco, the prohibitive favourite for league MVP, struck a beautiful free kick from a central position that Bush somehow clawed off his goal line.

There would be other chances, but Piatti nearly made it 4-0 when he clanged a shot off the post in the 79th minute.

As the clock wound down the Toronto supporters expressed their displeasure at having their number severely limited after problems with flares and smoke bombs on Sunday.

After enduring derisive chants of "na, na, goodbye" from the home fans they stood and cheered after the final whistle as the downcast players in red filed past for a final goodbye. 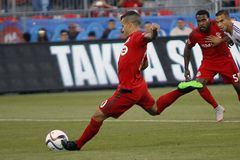 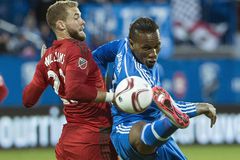 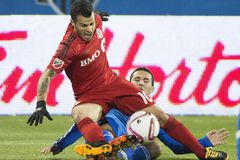