Toronto FC's space under the MLS salary cap is growing. But sadly so are its needs.

Head coach Paul Mariner had a veteran defender on top of his shopping list. Now he and Earl Cochrane, TFC's director of team and player operations, have had to widen the search to add a striker in the wake of Danny Koevermans' season-ending knee injury.

"We're working diligently behind the scenes," said Mariner, who is also Toronto's director of soccer operations. "Earl is working the phones constantly, over the weekend and today.

"We're trying to do some things but decent strikers don't grow on trees in world football, never mind in MLS. Let's see what happens."

Koevermans tore his anterior cruciate ligament in a 1-0 win in New England on Saturday. The Dutch designated player will have to undergo surgery and Mariner realistically does not expect him back until next May.

It's a nightmare scenario for a 4-11-4 Toronto team that has been trying to dig itself out of the pit created by a 1-9-0 start to the season.

While the team has steadied under Mariner, the former England international now has problems at both end of the pitch.

He has to fix a young defence that is conceding a league-worst 1.94 goals a game. And now he has to replace the league's fifth-leading scorer who has accounted for nine of his team's 19 league goals this season.

The immediate plan is to move rookie Luis Silva up front with Jamaican international Ryan Johnson.

"We're a little thin," Mariner said by way of understatement.

Toronto hosts the Colorado Rapids (7-11-1) on Wednesday night at BMO Field before entertaining England's Liverpool in a friendly Saturday at Rogers Centre.

The Liverpool game will be Toronto's 11th since June 6. Expect Mariner to dig deep into his roster to rest some of his regulars on the weekend.

"Fortunately we have a fan base that is super intelligent about these things," said the coach. "I think they'll all agree with me it's a little more important that we get MLS results than we get results on Saturday.

"Yes it's going to be a fantastic showcase and it's an honour for us to be playing such a storied franchise as Liverpool. We'll give it our best. But I've got to look out for my players."

Mariner has been clearing his roster to make space for new talent. Designated player Julian de Guzman was traded to FC Dallas, winger Joao Plata was loaned to an Ecuador club and attacking midfielder Nick Soolsma was released.

In just two days, the club has gone from three designated players to one (captain Torsten Frings).

TFC gets roster relief but no salary break on Koevermans' US$1.56-million tab this season, according to MLS. As part of that roster relief, Toronto gets an open spot for an additional international player and designated player for the remainder of the season.

With Frings the only active designated player, Toronto could sign two more DPs for this season but would have to be down to just three by next season (March), the league added.

The scenario offered Mariner plenty to talk about at a previously scheduled MLSE board meeting Tuesday afternoon.

Toronto will miss more than Koevermans' scoring. The 33-year-old Dutchman is seen as a model professional, a straight shooter who leads from the front.

Koevermans is also a physical presence who occupies the attention of defenders. A goal poacher, he can seemingly score with any part of his body. He also helped make the goal for Silva against New England with a nice give and go.

Defender Richard Eckersley says the big man will be missed.

"A fantastic player and a fantastic personality in the changing room," said the English native.

Koevermans is also vocal on the pitch, not afraid to challenge referees or stand up for his rights against opponents. That sandpaper attitude rubs off on teammates.

Ironically, an emotional Koevermans became a lightning rod for the struggling team earlier in the season after its league-record ninth straight loss to open the season.

"We're setting a record for the worst team in the world, man, and it's painful," Koevermans said at the time. "What can I say more? It's just the worst ever."

But it was Koevermans who scored the goal that ended the winless streak against Philadelphia. And his purple patch — six goals in five games — helped turn Toronto around under Mariner.

"He was doing everything he possibly could to get the team up the table," said Mariner, who thought Koevermans deserved to be at the all-star game.

"I'm not going to say we're not devastated about it. He's a great guy."

There was no date for Koevermans' surgery but Mariner said the goal was to have it as soon as possible.

The TFC coach said he had no problems with the challenge from New England defender A.J. Soares that resulted in the collision with Mariner. His view was that Koevermans "just stubbed his toe in the turf."

Until fresh legs are found, the onus for scoring will fall on Johnson (three goals) and Silva (two).

"It's the same old story in football," Mariner said. "Somebody goes down and it's somebody else's opportunity. ... Somebody's going to have to pick up the gauntlet. We're going to have to find some goals from somewhere."

Johnson is a tireless worker who has had run of bad luck in front of goal. But Mariner only has good things to say about the Jamaican who has played every minute of every league game this season.

"I said to his family at the weekend 'I'm not sure if you've got a freak here because this guy's got at least three or four lungs.'

"I don't know how he does it. He's resilient, he's tough. He's up for the cause every single game. ... He is quite a remarkable athlete."

"I hope he doesn't get injured," he added dryly.

Or get a yellow card. Johnson is one caution away from a one-game suspension.

Toronto is lacking depth throughout the roster. With Stefan Frei recovering from a serious leg injury, the team has been keeping its fingers crossed that nothing happens to starting goalie Milos Kocic. Bermuda international Freddy Hall remains in camp on trial.

NOTES — Mariner says defenders Adrian Cann (knee) and Ty Harden may see some action against Liverpool. But fullback Jeremy Hall (hamstring) is not yet ready. .. The TFC manager had no comment about reports linking his team to veteran defenders Kevin McKenna and Olof Mellberg ... Toronto opted for a short, light practice Tuesday in the oven-like conditions that prompted an extreme heat alert in the city. Forward Andrew Wiedeman, acquired from FC Dallas in the Julian de Guzman trade, was one of the few not complaining. "This is nothing." he said of the 30-degree-plus temperatures that felt like 40-plus. "If I got this in Dallas, I'd be happy."

Toronto FC striker Danny Koevermans out for the season
July 16, 2012 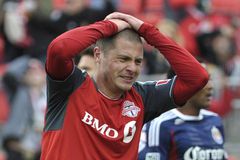