Jozy Altidore scored his second goal of the game in the 86th minute to complete a stirring comeback and lift Toronto FC into the MLS playoffs with a 3-3 tie with the New York Red Bulls on Sunday.

Altidore took a Michael Bradley pass and beat a defender, turning at the edge of the penalty box to fire the ball home. The Toronto forward, who has eight goals in his past nine matches, had scored on a free kick in the 68th minute to pull the home side within one.

TFC, which has lost just once in its past 10 games (7-1-2), extended its lead atop the Eastern Conference to two points. Despite the late collapse, the Red Bulls extended their club-record unbeaten streak in league play to 12 games (5-0-7).

Bradley Wright-Phillips, scoring in his sixth straight game, upped his season goals total to 20 with a pair for New York. The Red Bulls also got an own goal from Toronto's Steven Beitashour.

Bradley also scored for Toronto, which fell behind 2-0 after 31 minutes.

With New York City FC tying FC Dallas 2-2 Saturday, the BMO Field clash pitted No. 1 (Toronto) against No. 3 (Red Bulls) in the East. Two points separated them at kickoff.

Wright-Phillips, who set the MLS record for fastest hat trick from the start of a game (27 minutes) the previous time the teams met in late May, scored his second of the game in the 48th minute to restore the Red Bulls' two-goal lead at 3-1. New York playmaker Sacha Kljestan was given too much time in front of the Toronto defence and he found Wright-Phillips alone on the left.

Toronto switched to a back three midway through the second half in a bid to find some offence. It came from a curling Altidore free kick in the 68th minute after the Toronto forward had been bodied to the ground in a cynical challenge.

A diving Luis Robles saved an Altidore header in the 76th minute after the Toronto forward held off a defender.

The home side was without star striker Sebastian Giovinco, still to regain full fitness from strains in his quadriceps and adductor in the Aug. 27 loss to the Montreal Impact.

The visitors went ahead in the 12th minute when Beitashour, with Daniel Royer lurking behind him in front of goal, deflected a Felipe cross into the goal. Toronto paid for static defence, failing to clear the danger with a string of poor clearances.

Toronto had good early scoring chances, but Marky Delgado's shot deflected high and Jonathan Osorio's shot went wide. Altidore, taking a fine through ball from Will Johnson, rounded Robles and rode a challenge from a defender in the 23rd minute but hit the side netting.

Toronto goal keeper Alex Bono made a fine save to tip a Wright-Phillips header over the bar in the 26th minute.

Disaster struck Toronto in the 31st minute when centre back Eriq Zavaleta, under pressure from Royer, fell on the ball, leaving Bono alone to face three Red Bulls. Wright-Phillips added to his misery with a cheeky chip to make it 2-0.

Bradley pulled one back in the 41st minute, hammering a shot home after a pulsating run down the middle of the field.

Sunday marked the regular-season rubber match between the two with each team already posting a victory at Red Bulls Arena. Toronto took the season opener 2-0 while the Red Bulls won 3-0 in late May.

Coach Greg Vanney kept faith with the 22-year-old Bono, who continues to keep a now healthy Clint Irwin on the bench. Toronto has gone 8-3-3 with Bono since Irwin went down with a quadriceps strain June 25.

Bono came into the weekend second in the league in goals against at 0.98. Irwin's 1.08 goals-against average ranked fourth.

The Red Bulls were coming off a 1-0 win Thursday over El Salvador's Alianza FC in Scotiabank CONCACAF Champions League play. Coach Jesse Marsch rested Wright-Phillips and several others during that game. 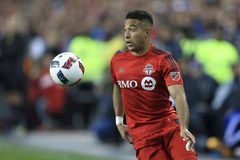 Toronto FC will try to extinguish the Fire in Chicago
September 9, 2016 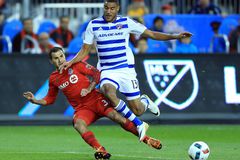 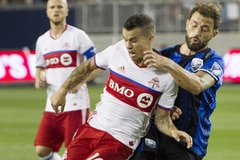