One of the last vestiges of Mo Johnston's reign was unceremoniously swept out of town Friday, opening the possibility that the darkness that has engulfed Toronto FC since Day 1 may just be a passing cloud and not the eternal night that many predicted it to be.

Julian de Guzman, the club's first designated player thanks to the chequebook-happy ways of the former director of soccer, will now call Texas home after being traded to FC Dallas in exchange for forward Andrew Wiedeman.

While TFC head coach Paul Mariner raised a few eyebrows in a conference call Friday in talking up the new acquisition as "one of the best finishers I've seen in the modern era," in truth this deal was all about freeing up the DP slot to be used on something more in keeping with the original intent of the rule. Designated players are supposed to be difference makers in Major League Soccer, something that can be plainly seen every time former German international midfielder Torsten Frings takes the field for TFC, and something that de Guzman consistently failed to deliver in the same role in 65 games for Toronto.

In fact, it was the play of Frings, plus the good vein of form currently being enjoyed by Canadian international midfielder Terry Dunfield alongside him, that forced de Guzman firstly to the sidelines, and ultimately out of town.

Economics certainly played a factor as well. While Dunfield gives good bang for the buck on his $86,000 (all currency U.S.) salary – most memorably popping up for the surprise winner in Wednesday's 3-2 win over Vancouver – de Guzman was an expensive afterthought in the last year of a deal at more than $1.9-million a season. While only $335,000 of that counted against this year's cap of $2.6-million, it hamstrung the team in its ability to go out and recruit some big-name talent from Europe, particularly for its back four, who have typically all been 24 and under.

That is where Mariner is looking to bolster his team, and with a DP slot in his back pocket, the deal to bring in veteran leadership from Europe is imminent. It can't come soon enough for a team that has the worst goals-against average in the league.

"Sometimes these things can take hours. Sometimes it can take days," he said of the coming acquisition. "Hopefully not more than a week."

While Mariner wouldn't say if Dallas was picking up all of de Guzman's remaining contract – "I'm not willing to get into that," was all he said, which told its own story – he did confirm that it would be picking up the entire remaining cap hit for the season. Toronto's cap flexibility is further improved by netting Wiedeman in return – as a Generation adidas player, the 22-year-old's $123,000 salary doesn't count against the cap.

The Oakland native was drafted 21st overall by Dallas in the 2010 Superdraft and has made eight appearances in MLS, although he has yet to find his name on the scoresheet.

Toronto FC wasn't the only Canadian MLS club tinkering with its roster Friday.

The Vancouver Whitecaps acquired midfielder and Jamaican international Dane Richards, as well as allocation money, from the New York Red Bulls in exchange for striker Sebastien Le Toux. Richards will join his new teammates in Chicago for Saturday's match against the Fire at Toyota Park.

Also, the Montreal Impact shipped defender Tyson Wahl to the Colorado Rapids for an international roster spot for the 2014 season.

The move marked the fourth roster move made by the Impact in the past seven days. 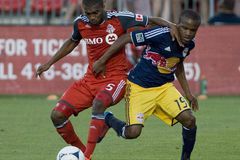 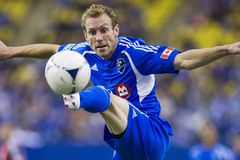 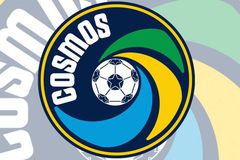