If there is anything than can make a player's mind wander it is a professional soccer season.

In Major League Soccer, the regular season starts in the first week of March and grinds its way through the next eight months to the end of October. Then, if you are good enough, there are another five weeks of playoffs to early December. If you go as far as the MLS Cup it means six weeks off and then back to training camp.

Along the way, there are several two-week breaks for international games where the better players get to serve another master.

It is a wonder for Toronto FC fans their team had not looked befuddled until nine days ago when it lost its first home game of the season, to the Montreal Impact. That became a two-game losing streak – the team's first of the year – when TFC lost last Saturday to the New England Revolution.

Jozy Altidore, 27, the Reds' star striker who is a regular on the U.S. men's national team with TFC teammate Michael Bradley, admits there are "dips" in a season but insists motivation is not a problem. Being a designated player, along with Bradley and Sebastian Giovinco, and the elevated status and paycheque that go with the designation, are incentive enough.

"I came here to win. [It was] specifically the reason I was brought to Toronto, to help transform a franchise," said Altidore, who expects to play Saturday at BMO Field against the New York Red Bulls after a three-game absence with a hamstring injury.

"It was a project I don't think many players get offered in your career. So that's how I'm motivated. Until that project is completed I'm coming here every day with the same attitude as the first day I landed here in 2015, to win.

"Of course, it's never rosy. There's dips, there's times you're feeling it's impossible, there's times where you feel like everything is going great. That's life. I'm not a guy who likes to leave something undone. Michael [Bradley] and Seba [Giovinco] are the same. That's our motivation."

Bradley also has to fit two World Cup qualifiers for the United States into the next MLS break at the end of the month.

Midfielder Jonathan Osorio is in his fifth season with TFC at 25 years of age and says there are ups and downs during the season.

"The start of season, anything can happen but you're excited so it's easy to get motivated," he said. "The middle of the season is when it gets really hard and you have to focus and use a little more concentration because it's really easy to lose focus.

"At the end of the season it's easier because of the playoffs and the games get more important. Now we're in the last stretch it's much easier to get motivated."

The major motivating factor now is to regain the momentum lost in the past 10 days. There is also the matter of clinching the MLS Supporters' Shield trophy as the first-place overall team in the regular season. The Reds blew two chances to do so with the losses but can clinch Saturday with a win over the Red Bulls.

Also expected back in the lineup with Altidore is fellow striker Giovinco, who missed the past three games with a quadriceps strain. This should put the pop back in the Reds' attack as Altidore and Giovinco are responsible for 28 goals between them this season.

Reds head coach Greg Vanney points to those kinds of injuries as equally responsible as the drawn-out schedule for the team's stumbles of late.

"Obviously in the last two to three weeks, we've been hit by these little nagging injuries," he said. "These little injuries are minor setbacks but they break up the rhythm of certain guys in their season. They have to take a step back, they have to rehab, they have to do a lot of things. In some ways that creates a disjointed time period in the season."

Both Altidore and Giovinco were kept out of last Saturday's loss to New England just to make sure they were completely healed for the stretch drive.

"Now it's about trying to reintegrate everybody, get everybody mentally back to the same place and same direction," Vanney said. "Seasons always have little bits of ebbs and flows that way. Ours just came in this last little period."

Altidore has been watching the furor kicked up by U.S. President Donald Trump over the protests by NFL players in support of Colin Kaepernick's stand against police brutality toward minorities and racial discrimination. Altidore said TFC players have not discussed taking a knee during the U.S. national anthem on Saturday.

"Everybody is aware of what's going on in the current political climate," he said. "Everybody has their own feelings. If anybody did choose to do that, they'd be supported through and through by the club, by the players, by the coaching staff." 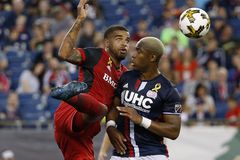 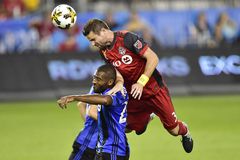 Chris Mavinga making mark in Toronto FC defence
September 8, 2017
Follow David Shoalts on Twitter @dshoalts
Report an error Editorial code of conduct
Due to technical reasons, we have temporarily removed commenting from our articles. We hope to have this fixed soon. Thank you for your patience. If you are looking to give feedback on our new site, please send it along to feedback@globeandmail.com. If you want to write a letter to the editor, please forward to letters@globeandmail.com.
Comments