Jordan Hamilton was taken aback and "really humbled" when he was recognized recently walking down Yonge Street.

With two goals in Toronto FC's last two league games, the young striker has turned heads on and off the pitch in his hometown. Still very much a work in progress, Hamilton is realistic about his place in the scheme of things, however.

"I feel I have a lot more to learn and give," he said after training in blistering heat Thursday. "I'm only 20 years old and I've only scored two MLS goals. I haven't really accomplished a great deal of things. So I'm still pushing myself and I still want to be a great player for Toronto in the future."

The loss of U.S. international striker Jozy Altidore to a hamstring injury in mid-May created an opening up front with Italian ace Sebastian Giovinco. Mo Babouli, another local talent, was first to audition for the temporary part but Hamilton has been the understudy to impress.

At six foot and 185 pounds, Hamilton is an athletic forward who plays an important role off the ball by enthusiastically pressing the opposition. He has also shown a deft touch in the penalty box, as shown by a nifty backheel to Giovinco last week, and the ability to create space for himself in the penalty box.

Hamilton's cameo — his MLS career account stands at 292 minutes — may be ending soon with Altidore seeing more time in training. The burly American is unlikely to start Saturday against the visiting Chicago Fire given that TFC — one bitten, twice shy when it comes to his tender hamstring — is not about to rush a prized asset back into action.

Especially when Hamilton is scoring.

"You get your minutes when you're a forward and you're putting things in the back of the net," Toronto head coach Greg Vanney said.

The Toronto coach said Hamilton has improved on a number of fronts including his positioning. In the past, his enthusiasm and athleticism took him to the wrong places, meaning he was not where he should be when the team when on the attack.

"Jordan just needs to keep learning and keep adding to each of these experiences a little bit more," Vanney added. "He's a big kid, (and needs to keep) continuing to learn and work on using his size in moments where he can. He did a great job of that in moments in the last game where I though he bodied and rolled some defenders."

Off the pitch, Hamilton is polite, well-spoken and respectful.

Ask him what it's like to play alongside Giovinco and a big smile creases his face.

"It's crazy," said Hamilton, who grew up watching the likes of Danny Dichio and Dwayne De Rosario score at BMO Field. "Sometimes you're on the field and he does something like (nut)megs two players and spins. And you're just like 'Wow.'

"But then you've got to get into the (penalty) box because you don't know when he goes to chip the ball through or find you. He's found me on so many occasions so far. I've found him a couple of times too. He's just always on the move. He's an amazing player, probably the best I've ever played with."

A remarkable talent but one mired in a little drought by his very high standards. Giovinco has not scored in his last six league games dating back to May 14 when he had two goals and an assist in a 4-3 home loss to Vancouver.

As for Hamilton, Vanney says the youngster has a good attitude and accepts he has more to learn.

"I think he's ecstatic with the time that he's gotten and he should be very proud of what he's done with the minutes that he's had. I think he feels more connected to the team now, like he's contributing to the team." 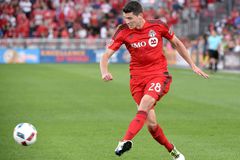 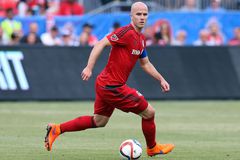 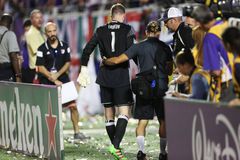