A glum Logan Emory sat in front of his locker. Luis Silva sent a chapstick flying. At the other end of the dressing room, a hobbling Eric Hassli was moving like a 90-year-old man.

Toronto FC's frustrating season hit another low Saturday afternoon in a 1-1 tie with the Philadelphia Union that felt far more like two points lost than a point gained.

A sloppy 85th-minute goal by Philadelphia fullback Sheanon Williams denied Toronto (5-17-7) its first MLS win in almost two months as the league's worst squad conceded yet another late goal. Toronto has given up 51 goals in league play this season and 12 of those have come in the last 15 minutes.

Toronto manager Paul Mariner had challenged his team to show its character after a woeful midweek 2-1 loss to visiting Chicago that eliminated the team from playoff contention for the sixth straight year. Mariner pointed to everything from his players' fitness to their lack of fight.

On Saturday, acting captain Darren O'Dea and goalkeeper Milos Kocic weighed in on the debate, pointing the finger at the team's suspect psyche.

"The ability's there, there's no question of that," said O'Dea, who has yet to win in six games with the club. "The team's mentally weak. Tough times in games, we don't hold out."

O'Dea, a soft-spoken straight shooter from Ireland, didn't hold back.

"You don't get sometimes what you deserve in life. You need to take it. And we roll over when we need to stand up most."

Added Kocic: "There's not enough belief that we can win a soccer game ... I think this team is very fragile now."

Still, the late game collapse might have been avoided if Toronto had taken its scoring chances. Silva could have had two goals himself before setting up Hassli's score in the 58th minute.

Toronto exited to a chorus of boos from the 15,669 fans who bothered to show up.

The Chicago game drew just 14,623 — the smallest crowd for a league game this season at BMO Field.

Saturday's number will further pull down Toronto's average of 18,681 fans a game, which was ninth out of 19 teams. With season-ticket renewals going out soon, a two-month winless streak makes for very poor timing.

"A decent response from the lads," a dispirited Mariner, who attributed the late equalizer to naivety on his team's part, said of Saturday's performance prior to the late goal.

"Clearing your lines is just basic ... You can't keep making the same mistakes on a football field," he added.

Mariner, a former England international, also pointed the finger at his team's mentality.

"Whatever it takes to win a football match, that should be our mantra," he said, noting he was having to field "fringe players" still learning their trade.

In truth, Toronto has lost its steel due to longterm injuries to captain Torsten Frings and hard-nosed striker Danny Koevermans.

During Saturday's radio broadcast of the game, TFC's director of team and player operations said the club needs three to four new starters and three to four quality depth players. Some may say Earl Cochrane's assessment of the size of the needed turnover is low.

Other than Ryan Johnson, Richard Eckersley, Ashtone Morgan (who missed the game through suspension), Silva and O'Dea, the existing healthy talent pool is thin.

Dunfield provides some grit and Kocic, playing for much of the season in front of an ever-changing defence, has done well in goal in place of the injured Stefan Frei. Hassli has a nose for goal. But there are far more holes than strengths in the roster.

It's the same old story for a franchise yet to find its MLS feet.

As expected, Saturday's matchup of the league's two worst teams did not produce a Picasso. Toronto put two shots on target to Philadelphia's one.

The Union are a young squad with a stingy defence (they had yielded 30 goals coming into the game, compared to 50 for Toronto) and popgun attack. And while they started stroking the ball around early, they did not threaten the Toronto goal and the home side had most of the attacking play as the first half wore on.

The Philadelphia defence did not live up to its billing and looked shaky at times. It bent but did not break, however, until the second half.

Toronto outplayed the visitors but unable to make that advantage pay until the 58th minute.

Hassli's goal had looked like it was going to be the difference. It was the French striker's second goal in as many games and his third in six outings since joining Toronto from Vancouver.

It came after a long ball from O'Dea found Silva down the right flank. He raked the ball back to Dunfield, who was unable to make contact but it found its way to Hassli who calmly fired a right-footed shot into the corner of the net.

But any positives disappeared with the late goal from Philadelphia (7-13-6).

Toronto was unable to clear a low cross from Antoine Hoppenot through the penalty box and the ball went through a sea of legs until Williams tapped it in for only his second goal in 63 career games.

"It was just a matter of fact who was going to touch the ball in," lamented Kocic. "It was almost a certainty it was going to be a goal."

Dunfield and Johnson returned to the Toronto lineup from international duty but Morgan was forced to sit out due to accumulation of yellow cards.

Mariner was irate that Hassli, who had to leave in the 80th minute after being hurt in a tackle, could be "kicked from pillar to post" without protection from the officials.

"I've got to be careful with what I say. It's getting embarrassing, to be honest."

TFC needs to make a point against Philadelphia
September 14, 2012 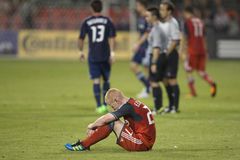 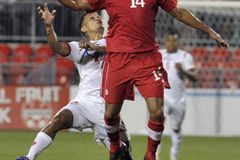