It was a transaction largely lost in a week that saw the MLS club acquire Brazilians Gilberto and Jackson, reward goalkeeper Joe Bendik with a new deal and trade away the rights to 'keeper Stefan Frei and midfielder Bobby Convey.

But Vanney moved front and centre on Aug. 31, 2014, when GM Tim Bezbatchenko fired coach Ryan Nelsen and gave the keys to the struggling team to the former U.S. international defender.

Fifty-one regular-season wins later — more than the franchise's first seven coaches combined — and with Toronto one victory away from a second straight MLS Cup appearance, the 43-year-old Vanney has been named MLS coach of the year.

Vanney received 37.07 per cent of votes by MLS team officials, players and media. Atlanta's Gerardo (Tata) Martino was second at 22.30 per cent and Chicago's Veljko Paunovic third at 11.17.

Vanney, while proud of the honour, deflected the credit.

"I think this particular award goes to all of us who have been involved this year because it really came because of the success we had as a team this year," he said.

Vanney was rewarded for a record-breaking season that saw Toronto (20-5-9) earn a league-record 69 points, collecting the Voyageurs Cup as Canadian champion and Supporters' Shield for best regular-season record en route.

There were challenges, however.

And mercurial Italian striker Sebastian Giovinco, an MVP candidate once again, had a roller-coaster year that featured tantrums, a poorly timed playoff suspension and some nagging injuries in addition to wonderful moments of skill.

"Far more teams would have caved than teams that would have persevered through this ... We still managed to persevere and get the results we need in difficult times," Vanney said.

Perhaps Vanney's biggest accomplishment has been successfully motivating a team that came within one kick of the MLS championship in 2016. He did it by setting goals and having discussions on the kind of attitude or character needed to achieve them.

"That to me is the most important discussion because the only way you achieve goals is if you have the right attitude every day when you go out to work," he said.

Vanney is the cool head running the show, a student of the game who is never far from a screen so he can do some more soccer homework. Former Los Angeles Galaxy teammate Ante Jazic calls him a "soccer nerd." Moor, who played with Vanney at FC Dallas in 2006, says he is a "soccer geek."

"He watches the best teams in the world to see how he can make TFC better," said Moor.

Under the cerebral Vanney, Toronto has become one of the more sophisticated teams in MLS with the ability to change tactics seamlessly on the fly. The club has also become quietly efficient, able to grind out wins in whatever fashion required.

Vanney, who worked in the Chivas USA and Real Salt Lake organizations after retiring, learns from mistakes. Recalling a Los Angeles Galaxy game as a player when a word of a tactical shift did not reach him, Vanney had substitute Tsubasa Endoh carry a note to show teammates of a formation switch when he entered a game in Montreal late last season.

He has also managed to keep his well-stocked, well-paid roster happy, at least from the outside. A measure of Vanney's deft touch is how he promoted goalkeeper Alex Bono over incumbent Clint Irwin with nary a ripple this year.

While Vanney is willing to put an arm around a player's shoulder, the father of four is no pushover. Players earn their playing time and a strong leadership group in the locker room ensures that no shortcuts are allowed.

Vanney lost his first two games as coach and finished the 2014 season 2-6-2. Of the 18 players who dressed for his debut (a 1-0 loss to Philadelphia) only four remain with the club — Bradley, Jonathan Osorio, Nick Hagglund and Ashtone Morgan.

"We need to act and build a culture of success and expectation on a daily basis and live up to those standards every day," Vanney told reporters at the end of that season.

Mission accomplished, no small feat for a franchise once known as the league doormat.

Altidore says Vanney's instincts and timing as a coach are spot-on.

"He's done a really good job in terms of kind of letting the guys sort themselves at times, which is something that sounds simple but I don't think a lot of coaches do," he said in an interview earlier this year. "They try to micro-manage everything and I don't think he's about that."

Vanney and Bezbatchenko, who came on board less than two months before Vanney, were rewarded with new contracts in July.

Toronto's career league record was 49-102-66 when Bezbatchenko took over. The club has gone 62-47-32 since with Bezbatchenko, along with chief scout Jack Dodd and others, adept at finding the pieces needed to keep the TFC engine humming.

Vanney is the first coach of the year winner from a Canadian franchise (Canadian Frank Yallop won the award in 2001 and 2012 with San Jose).tie. 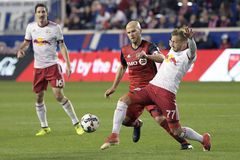 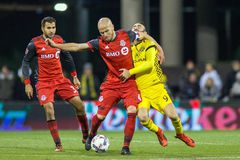 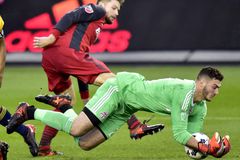