After seven years of throwing in its cards before the MLS season is over, Toronto FC has finally gone all in.

The additions of England striker Jermain Defoe, influential U.S. midfielder Michael Bradley, Brazilian forward Gilberto and return of Canadian star midfielder Dwayne De Rosario have given the MLS club a dose of worldwide credibility and its beleaguered fans some badly needed hope for the future.

It comes at a huge cost, with MLSE boss Tim Leiweke confirming that the team will lose this money this season.

"Our owners understand the math. This was not done without explaining to them the math. They get it and they're OK with it," Leiweke told The Canadian Press on Friday.

"Are we going to make money this year? No. But that was not a concern. To the credit of the owners, they understand it's going to take us a while to get this to a point where we pay for it. But they wanted to make a statement. Are we paying a premium to do it? Yes. Do our fans deserve it? One hundred per cent. Am I going to apologize for it? Not at all.

"We are very lucky to have these owners (at Maple Leaf Sports & Entertainment)."

Toronto has yet to confirm the signing of Bradley, although AS Roma put out a release Thursday saying it had sold the midfielder to MLS for US$10 million (C$10.9 million). A source with knowledge of the league said Toronto was the lone suitor. And De Rosario didn't hold back on Twitter.

As designated players, only US$390,000 of each of their pay count against the salary cap (which was US$2.95 million last season).

Max out the reported salary and transfer numbers and the total Defoe-Bradley bill exceeds C$100 million, a figure one other club official said was inflated and inaccurate.

Whatever the number, MLSE is unlikely to cry poor thanks to the Maple Leafs and Raptors, not to mention revenue from restaurants, condos, TV stations and other money-makers.

The numbers, however, are eye-popping in MLS. It's a league with a huge financial gap between a few select millionaires and worker bees who have to get by on US$46,500.

The bold transfers, which will only further extend the chasm between the haves and have-nots who share the same pitch, turned heads eyes across the Atlantic.

Leiweke, like manager Ryan Nelsen, says there is plenty more work to do. He says he has been "beating up" Nelsen and GM Tim Bezbatchenko on possible roster holes.

"Go ask David (Beckham)," he added. "We went through this in L.A. where it took us time to put it all together. It will take us time because we have a lot of new bodies we're introducing here.

The MLSE boss has said repeatedly that the franchise cannot make a mistake in choosing its designated players.

"We have spent a lot of time and lot of money on this over the last six months."

Leiweke, who brought Beckham to MLS to sell the league and win titles, is convinced that the charismatic Defoe is the right man for a similar job in Toronto.

"We can't find a better ambassador than Jermain Defoe — with the exception of David Beckham and he's not coming back. And so what I love about Jermain is he wants to help us take this league, this sport and this team to the next level and he is capable of doing that with his personality and what he can do on the pitch."

"People are going to love him here," Leiweke added. "I've told him already he's going to end up being the most popular guy in Toronto, including that mayor (Rob Ford)."

The East Londoner has already made friends during the course of the negotiations. Leiweke said hip-hop star Drake, a global ambassador to the Raptors, made several calls to Defoe to help sell him on Toronto and the two still talk regularly.

In Defoe, Toronto has acquired a charismatic player who has scored goals wherever he has gone.

In two stints at Spurs, the five-foot-seven 143 pounder has collected 142 goals in 362 games in all competitions.

According to Opta Sports:

— Defoe is one of only four players to score five goals in a Premier League game, against Wigan Athletic in November 2009.

— He has the most goals (23) by a substitute in Premier League history.

— He has 123 goals in the Premier League, 15th most since the league began.

— He has averaged .32 goals per game during his Premier League career.

And while he had to play second fiddle to Spanish striker Roberto Soldaldo — who cost 26 million pounds (C$46.7 million) — in the league under former manager Andre Villas-Boas earlier this season, Defoe is still a force to be reckoned with, according to new Tottenham boss Tim Sherwood.

"That instinct of scoring goals was never going to leave Jermain Defoe," Sherwood told a news conference in London. "You'd have to wait until his legs go and they're far from gone at the moment."

Defoe is scoreless in 12 league outing this season but has nine goals in eight Europa and League Cup matches. After recovering from a hamstring injury that has kept him out for five matches, he is expected to be in the matchday squad for Saturday's game against visiting Crystal Palace.

The next day he will jump on a plane to Toronto for Monday's news conference, where he will joined by Bradley if all goes well, before flying back to London. The striker is set to remain with Tottenham until Feb. 28, Toronto's season kicks off March 15 in Seattle.

"It's a great opportunity for him, something he really wanted to do," said Spurs manager Tim Sherwood.

The Tottenham boss called Defoe's contributions "immense" — both for Spurs and English football.

"He's one of the top strikers this Premier League has ever seen. His goal-scoring record, both club and country, is second to none, and long may that continue. Because I see him still having a future for England in the World Cup in the summer."

Leiweke, who said the negotiations were "difficult," rubbished the suggestion that Toronto was getting Defoe on the downside of his career.

"They don't know Jermain Defoe. They're wrong. He's fiercely competitive and he's coming here to win. And I still think his best years are ahead of him. He's a very good player that still has many good years left in those legs and in that head and in that body.

"So it was hard to do because we weren't the only ones that knew that."

Leiweke can't wait for his season to start.

"This is going to be a great fun team to watch and a wonderful ride now for everybody in Toronto. I'm really excited about that. But we've got to go prove it. We still have work to do and you never quit. We have holes to fill and we still have deals to do."

That will be helped by "a good source of allocation money," over the next few years which will help stretch the salary cap. Plus the team has a bushel of draft picks in 2015.

The Defoe transfer includes an advertising deal between the two clubs that includes promotional, branding, broadcasting, social media and digital rights. MLSE will stock, promote and sell official Spurs merchandise at all its retail outlets and support the THFC Official Canadian Supporter's Club.

Spurs will also play an exhibition game in Toronto on July 23, in the middle of a summer tour that will also see matches against the Seattle Sounders on July 19 and Chicago Fire on July 26.

Leiweke praised Spurs chairman Daniel Levy for being open to the deal, eventually.

"At first this was not a conversation that was going well," he acknowledged

Now it seems the ties are tight with Leiweke calling Levy a friend and saying MLSE has offered to help Tottenham with its new stadium in London — "That's something I think we do well" — as part of what he called an ongoing friendship, partnership and relationship.

Sherwood said he will look to strikers Soldado, Emmanuel Adebayor and Harry Kane in the post-Defoe era, with support from Nacar Chadli, Eric Lamela and Gylfi Sigurdsson. 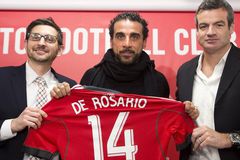 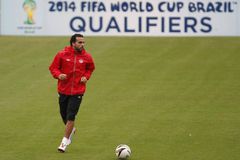 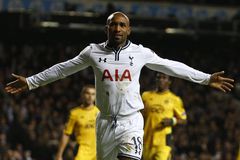