Luis Aguiar, dressed in black, commands the front of the classroom. There are PowerPoint slides, and he scribbles in black marker on a whiteboard. It's a fourth-year undergraduate class in sociology.

The subject is Cristiano Ronaldo.

It may, at first glance, seem less than sufficiently weighty for academia. The brightest lights of popular culture have never been a principal focus of university study, although they have at times been considered, from Frank Sinatra to Beyoncé.

But to Aguiar, a professor at the University of British Columbia's campus in Kelowna, Ronaldo is a perfect subject for our era.

A study of one of the great athletes of this century becomes a discussion on obsession with celebrity, athlete superstars, social media, gender, race, identity.

This swirl of ideas is what inspired Aguiar, a supporter of Lisbon's Benfica, to create the course on Ronaldo for this semester.

Aguiar displays an image from the Daily Mail, the British tabloid, showing Ronaldo side by side and equated with the cartoon character Johnny Bravo, a heavily muscled dimwitted narcissist.

It's easy to laugh. The goal here is critical thinking: how the idea of a star is created, broadcast, dissected and then lodged in a collective consciousness, where everyone watching somehow feels they know the person, his true character.

Fourteen students, most of them women, sit at attention. Aguiar circles to the key question of his lesson: The fixed idea of whom the viewer, the reader, the sports fan, has in their mind, is a rudimentary distillation.

The sociologist aims to flesh out a more nuanced notion of Ronaldo. More human. Fans want sports stars to be brilliantly perfect, magical on the field of play and instantly humble after an extraordinary display. Preening is disdained. Young heroes are supposed to be suitably pious and relatively reserved. The idea of a star as more than a singular image is a lesson that would benefit everyone in this era of 140-characters of hyperbole.

"You and I, we have multidimensional attributes to our characters," Aguiar continues. "Sometimes we can be really genuine and kind and friendly. And sometimes we can be aloof, disinterested. But Ronaldo always gets pigeonholed only as the Johnny Bravo sort of identity. There is no room for an enlargement of the constructions of Ronaldo. Why is that?"

Ronaldo, the ace scorer for Real Madrid, turned 30 in February, and is often seen as the equal but opposite of Lionel Messi, the Argentine who leads FC Barcelona. On the pitch, the two annually vie for the title of the planet's best player, Ronaldo winning the past two, Messi the previous three.

Around the world, however, Ronaldo's louder personality scores higher on social media. He has more likes than anyone on Facebook, 102 million, surpassing the singer Shakira. On Twitter, Ronaldo's 34 million followers rank 10th among individuals – and far higher than any other athlete.

He grew up poor on the Portuguese island of Madeira. He's the guy who crashed his Ferrari in 2009 on the way to practice, and in early March posted on his Twitter and Instagram a picture of himself in sunglasses and a jean jacket, stepping into his silver Rolls-Royce, also on the way to practice. CR7 is on the cover of fashion magazines. He is, some have argued of late, the best to have ever played the game.

Aguiar, like Ronaldo, grew up on a Portuguese island in the Atlantic, in the Azores, and moved with his family to Montreal in the 1970s when he was 11. He studied at Concordia and McMaster before completing his PhD at York. As the class in Kelowna moves to discussion after his lecture, the professor asks for conclusions.

"Always question why," student Billie Franck ventures. "Why are they portraying him this way, and what are they gaining from it?"

In his 1922 book, Public Opinion, journalist Walter Lippmann introduced the modern idea of stereotypes – a concept to understand a world that had become rapidly more complex. Reduce something or someone to an essence, and the danger is obvious: too narrow a definition.

In sports, this is pervasive – a situation compounded by social media. One or two actions or events become the long-standing definition of a person. Player X is soft. Player Y is hard-working.

Ronaldo deserves at least some of his reputation, and at this point he can do little to escape it. Instead, in fact, he compounds it: Earlier in March, after struggling Real Madrid lost a Champions League game in which Ronaldo scored twice, he declared he would not speak to the media again until the season was over.

At UBC in Kelowna, Carley Brady is completing a psychology degree this spring and plans to travel before graduate studies in education. "A lot of people can identify with sport," she says during a break from class. "I've learned a lot about the sociology of sport, like race, like gender, like class, how all of those different things interact with sport. It makes it interesting."

The Ronaldo class stoked widespread media interest in February when UBC first put out a news release. "He's football media crack," Aguiar says of all the attention studies in Ronaldo have sparked. "They're addicted to him." Several publishers have approached Aguiar for a book proposal.

The lesson isn't fame. It is, Aguiar tells his students, to apply the work "to the social world long after the course on Ronaldo is forgotten." 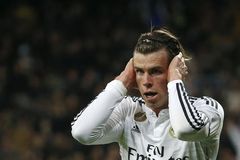 Kelly: TFC's Altidore is back where he belongs
March 8, 2015 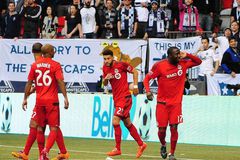