Battle of the bailout countries is what some were calling it. Some battle. It's Ireland that needs to be bailed out of this tournament.

Some elements of the Irish and British media talked up a fairy tale outcome for the battling Irish. In part, and most fancifully, because of the setting. There have been times when Gdansk was a very important place. This ancient port city on the Baltic Sea was once considered the main crossroad city in northern Europe. Napoleon called it "the key to everything" when he was busy trying to conquer all of Europe.

In 1980, the shipyards of Gdańsk were the birthplace of the Solidarity trade union, whose defiance of the Communist authorities laid the groundwork for the end of Communist rule in Eastern Europe.

It is, then, a place where power has been challenged with impudence and toughness.

Republic of Ireland manager Giovanni Trapattoni is neither Napoleon nor Lech Walesa. He's a wily 73-year-old who has seen everything in soccer. Perhaps he's seen as casually magisterial a display as Spain produced here, but it is unlikely.

Ireland was doing desperate defending from the get-go and, in an eerie repeat of the opening minutes against Croatia, gifted Spain an early, soft goal. Stage fright was an excuse for the opening-game jitters and confusion. There is no excuse for what happened here in the fifth minute. A characteristic piece of short passing movement by Spain was ended by Richard Dunne tackling David Silva. but the ball was easily plucked away by Fernando Torres, who slid around Stephen Ward and aimed a shot that went past Shay Given in the Irish goal, and Given should have stopped it.

Even before the first half ended, the game began descending into farce. Referee Pedro Proenca of Portugal, perhaps as mesmerized by Spain's passing as the Irish team, ran into Ireland's Keith Andrews and pushed him to the ground. As a result, Spain retained possession again. Such was Spain's dominance that it seemed peculiar they were only up 1-0 at halftime.

Silva played one-two passes with Xavi as if on a training-ground exercise. Ireland seemed to play in a parallel universe, one of desperate mediocrity, highlighted by Spain's second goal. Andrés Iniesta, with space, took a hard direct shot. Given blocked it but punched it to Silva, who managed to fool three Irish defenders about his intentions and score.

Torres made it 3-0 in the 73 minute with a move that was more about Irish sloppiness than his effort. Torres was soon replaced by Cesc Fabregas, who joined in the torture of Ireland by making it 4-0, the final score, with deft movement from a corner kick taken short. The fact that corners could be taken short seemed to come as news to Ireland, as did everything about the necessity of defending against Spain's movement.

Trapattoni made several substitutions but nothing improved. Ireland, now eliminated from contention, was, frankly, an embarrassment.

There were an estimated 30,000 Irish supporters in the city for the game. That's 10,000 more than were in Poznan for that loss to Croatia. With hopes high of a good tournament display by Ireland, many fans long ago chose to come here and see what happened when Ireland took on the world and European champions. Their partying was a little subdued in the rain and cold all afternoon, but they danced and sang with their Spanish counterparts and made many bar owners and shopkeepers happy.

It was odd but warming to hear the two groups singing Oé, Oé, Oé in unison before the game's start. Certainly more appropriate music to the ears than the official Union of European Football Associations theme song of the tournament, a bit of disco drivel by Oceana called Endless Summer, which is played ceaselessly in the stadiums. Endless summer my damp bum.

On the way to the game in the chilly dampness, at the main railway station, I saw a middle-aged Irishman, wrapped in green blanket, waiting for the train to the stadium. He saw an elderly Polish lady on the platform, wearing a nice, obviously hand-knit "Poland Euro12" scarf against the cold . He said to her, "You'd want to get knittin' again. For the World Cup, like." She understood him, accent and all, and blushed. Maybe all the noise, singing, drinking and roaring in her city were forgiven.

For most of those supporters the game, with its emphatic defeat, was only part of the day and the night. Which is worthy and good. For the last ten minutes of the game, Ireland's supporters sang, over and over again, The Fields of Athenry, their song of defiance and commemoration of the great famine. They made the stadium shake and vibrate for the longest time. They owned it.

It is all the Irish owned in Gdansk. And Spain will meet tougher opposition, but based on this performance, it may own the Euro tournament again. 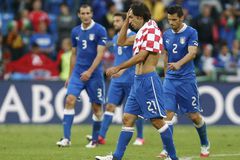