After dogged work by Allysha Chapman separated the ball from a Swiss player, Sinclair aimed a cross at Josée Bélanger in the penalty box. A Swiss defender headed it away, but only as far as Rhian Wilkinson. The veteran fullback whipped a cross in and Sinclair, anticipating the ball and then outmuscling a defender, poked it to Bélanger, who fired a left-footed shot past goalkeeper Gaelle Thalmann for a 1-0 Canada win.

Under coach John Herdman, Sinclair is no longer at the front of the Canadian ship. She is there to float the entire boat, making everyone better.

Despite being a key cog in both Canadian victories at the tournament, the 32-year-old forward from Burnaby, B.C., has drawn criticism from some quarters for her play as the Canadian offence rattled and coughed like a rusty engine in the early going.

Too slow. Past it.

In the Canadian camp, such criticism of their talisman is heresy.

"That woman doesn't deserve to take stick," an emotional Herdman said after Sunday's game. "She's a world-class person, world-class player. She gives everything to this team every single game.

"Look, you put her in a different team, she'll score 20 goals. But look around at the goal-scorers at this tournament. [Sweden's Lotta] Schelin goes home without a goal, [American Abby] Wambach pokes one in. [Brazil's] Marta gets one. International football ain't easy and Sinclair's given everything, every single game.

"Off the pitch, she's doing more than she's ever done before to keep this team connected. She's the pride of our country and she's going to stay that. And we should be proud of what that woman's putting in to this Women's World Cup for our team."

Warming to the topic, Herdman said Sinclair is playing her role to perfection – "to bring other players to another level."

"And if she's going to put that sort of work in, you'll see the best out of [fellow forward Melissa] Tancredi and Bélanger. And I think that's what she does. So at some point, Christine will do what we all expect Christine to do. At some point. She did it against China in front of 50,000 people [in the tournament opener], took a penalty that most human beings would have walked away from. But she's there.

"And I'm proud that she was able to put in a shift like that in BC Place."

Eighth-ranked Canada will look to their captain again Saturday in the quarter-final at the same venue against either No. 6 England or No. 11 Norway.

As is her want, Sinclair deflected praise for her part in the goal against the Swiss to Wilkinson for her ability to deliver a cross.

The Canadian captain also sacrificed her body for the cause against the Swiss, landing face down after a collision that left her with a charley horse. "We're all good," she said with a crooked smile afterward.

Sinclair is revered by her teammates. Some have grown up alongside her, watching her turn into a soccer icon. Younger members of the squad still pinch themselves that they are on the same team as their idol.

"My childhood dream every single day," forward Jonelle Filigno said of lining up with Sinclair.

Behind the scenes, Herdman has convinced the private Sinclair to open up to her teammates – further strengthening that connection. He even used a photo of a disconsolate Sinclair, on the ground after the gut-wrenching Olympic semi-final loss to the United States, to motivate the team.

The shy Sinclair does not shun the media spotlight but chooses her moments, often leaving veterans such as Erin McLeod and Karina LeBlanc to speak for the team.

Her teammates reject any negative reviews of her captain.

"I think anyone who criticizes her is misinformed," Wilkinson said.

"I think it's easy for people to say that are [only] watching a couple of games," McLeod, speaking before the Swiss game, said of the criticism. "I have the privilege of training with Sinclair every day and in my opinion she's the best player in the world. That hasn't changed.

"We maybe, as a team, have to get her the ball more, in more dangerous places. But the tournament is just beginning, I hope, for us, and I think there's a lot more to see."

Under Herdman, Sinclair uses her loping run to patrol the entire field. And wherever she goes, she brings passion, vision and creativity.

Ask her teammates who the best player of the world is and the answer is rapid-fire.

"She's unbelievable," midfielder Sophie Schmidt said. "I love playing alongside her. She makes me look good and she makes it look effortless. She's just class."

"She's just an inspiration to play with and be with," teenage midfielder Jessie Fleming added.

The Canadian women have a fierce pride in their leader, especially for her low-key style. While Sinclair dips her toe into social media only occasionally, teammates say they see her sharp sense of humour on a regular basis.

And their say their captain is anything but a big-time Charlie.

"She is so humble," Filigno said. "That's what makes her so likable … She's the best striker in the world to me."

Said LeBlanc: "I think she's a perfect leader for us and for this nation." 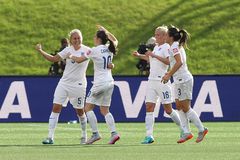 Kelly: Canada owes a lot to Christine Sinclair, but she isn’t the key to this tournament
June 19, 2015 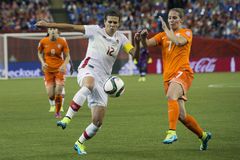 Playing at home a double-edged sword for Canada at Women’s World Cup
June 19, 2015 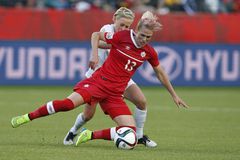