There is one person who should be at mid-pitch Saturday, taking bows before 20,000 footy enthusiasts and basking in the glory of Vancouver's debut in Major League Soccer.

But while majority owner Greg Kerfoot will attend the Empire Field match between his expansion Vancouver Whitecaps FC and Toronto FC, nothing could be more abhorrent to him than a moment in a spotlight.

Even if it so richly deserved.

The Vancouver businessman guards his privacy to the point of reclusiveness, his motives difficult to pin down, as are most things with Kerfoot. What isn't elusive, however, is his devotion to the beautiful game.

"The one thing I can safely say is that he's done his talking with investments in the game," said Whitecaps president Bob Lenarduzzi, who, like everyone in the inner circle, is guarded in what they reveal about the boss. "He doesn't want to be refunded in any way."

Kerfoot's arrival in soccer seemed almost accidental. In 2002, he decided to buy the near-extinction, second-division Whitecaps within weeks of being approached. He took control of the team by assuming $100,000 in debts, and the club's staff of three people worked out of his home.

As the organization grew, Kerfoot, now in his early 50s, moved it to swanky Gastown offices, and became the invisible hand.

"He was a quality owner with great vision," former Whitecaps president John Rocha said. "The community has kept a significant asset and it's reached this point. ... He'd be really happy to see his vision coming together."

This much we know about Kerfoot: he is tall and slender, a husband and a father, and he made his fortune in computers. He keeps a small, closed circle of friends, and plays hockey at Hollyburn Country Club near his West Vancouver home. He does not play soccer.

His Whistler mansion, located on Alpha Lake, near the Creekside base area, is valued at $16.1-million, according to BC Assessment. The lakeside property also features a private hockey rink that seats 100 spectators, and it held Olympic parties, but only after Canadian athletes were given instructions to respect the host's privacy.

Associates portray Kerfoot as an extremely black-and-white thinker who has little time for nuance and doesn't suffer fools. Some in the business community have found the Whitecaps difficult, because so much of what happens is on Kerfoot's terms, and because he isn't a schmoozer.

Roughly five years ago, when the MLS ball started rolling, a meeting of a dozen business leaders was organized so that Kerfoot could be properly introduced.

"Greg showed up a few minutes late because he wanted to avoid the social part, spoke for 40 minutes about his vision for the club, then said 'thank you,' and left," said one attendee. "The meeting was designed to get to know Greg. And when it ended, we still didn't know Greg."

To wit, Kerfoot has insulated himself with many faces, including minority partners Steve Nash and Jeff Mallett.

Nash is the two-time NBA most valuable player who lends celebrity and will make a public appearance at Empire on Saturday. Mallett is the former Yahoo! executive who liaises with the league office and a global network of soccer contacts. Steve Luczo, a minority shareholder in the NBA's Boston Celtics who once bought Kerfoot's company, also has a stake.

The quartet made a $35-million (U.S.) bet on the MLS, paying a huge expansion fee and start-up costs to get into a league with paltry television ratings. On the ground, they've entrusted it to Lenarduzzi, Canada's soccer ambassador, chief executive officer Paul Barber, the former Tottenham executive who brings English Premier League credibility, and director of soccer operations Tommy Soehn, an old MLS hand.

But the first game between Canadian MLS teams doesn't happen without Kerfoot.

The Canadian women's team would not be up to sixth in the world rankings and a contender at the World Cup in Germany this spring without Kerfoot's financing, which ran through the last Olympic cycle. And soccer would not be a burgeoning commercial property, with MLS coming to Montreal next year and a new national broadcast contract with TSN, minus Kerfoot's seed money.

"I can tell you one thing: I sure didn't get into this business because I thought it would be a good financial investment," he said in a statement when he bought the club, some of the few public words to come from a man who doesn't have a Wikipedia page, and isn't listed on the team's website.

Kerfoot grew up in Burnaby, obtained a bachelor degree in computer science from the University of British Columbia in 1983, and quickly got a job at Computer Associates. His programming acumen was apparent early, helping the firm develop the popular accounting system Accpac.

Five years later, Kerfoot made the leap to a startup, Crystal Services, which employed five people. He signed on as head of R&D and chief architect of the program Crystal Reports. It was innovative database software that helped companies produce reports to make sense of disparate numbers such as accounting figures. Kerfoot's handiwork was a hit and still exists more than two decades later, marketed by global giant SAP.

But the sports business is different. It is built on the emotional bond between customer and team, and on a trust that ownership does its best to make the team competitive.

Ultimately, the Whitecaps buck stops with Kerfoot. And ultimately, the hands-on culture of soccer fans wanting a say in their club's management may bump against Kerfoot's secrecy.

But at this moment, for the hundreds of members of the Whitecaps' supporters group, and the thousands of soccer fans in B.C., Kerfoot is Santa Claus.

"He's like the Bigfoot of the Pacific Northwest because nobody has seen him," said John Knox, president of the Vancouver Southsiders supporters group. "But he deserves a statue in downtown Vancouver as far as we're concerned." 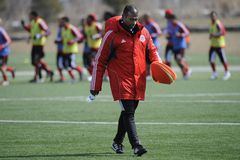 Follow Matthew Sekeres and David Ebner on Twitter @mattsekeres @davidebner
Report an error Editorial code of conduct
Due to technical reasons, we have temporarily removed commenting from our articles. We hope to have this fixed soon. Thank you for your patience. If you are looking to give feedback on our new site, please send it along to feedback@globeandmail.com. If you want to write a letter to the editor, please forward to letters@globeandmail.com.
Comments