In the annals of sordid World Cup controversies and shenanigans, the Luis Suarez issue is small. And best forgotten as the next stage, the intense drama, unfolds in the Round of 16 and beyond.

There have been other, more scandalous events at a World Cup. Diego Maradona's removal from Argentina's team in 1994, after testing positive for use of the banned stimulant ephedrine. That coming after he'd been suspended for 15 months in 1991-92 for cocaine use.

Roy Keane's departure from the Republic of Ireland team in 2002 was epic. Then the only world-class player for Ireland and captain of Manchester United, he'd argued publicly and bitterly with manager Mick McCarthy. He walked out on his country. People in Ireland still argue for and against Keane to this day.

Young Suarez and his biting fetish are pipsqueak stuff in comparison. Let the fussing and fretting stop, for the good of all.

On Wednesday night, after the France-Ecuador match, colleague Cathal Kelly and I went past the Copacabana Palace hotel in Rio. There was more than the usual happening there. The press, TV cameras and gawkers had gathered. Inside was the Uruguay Football Association president, Wilmar Valdez, along with the elderly Julio Grondona, long-time head of Argentina's football association and also a senior FIFA official.

At some point, just after we passed the hotel, Valdez appeared and made some bland statement about FIFA's investigation of Suarez. The next morning the FIFA suits spoke in Sao Paulo and Suarez was sentenced for his actions. Done and done.

Along the beachfront here in Rio that night, not everybody was talking Suarez. Just remember that, as the sanctimonious fulminations echo over from England.

Because Suarez is a Liverpool player and because of the English media needing something to write about other than England's sad effort of a World Cup campaign, you'd think Suarez was the top talking point here. He isn't.

Good riddance to him, good riddance to England and the loud, droning sound of its depressed, desperate-for-an angle media horde. Safe travels home, the lot of you.

Supporters of France and Ecuador teemed on the seafront here while the suits discussed the sentencing of the mercurial Suarez, that changeling fairy child of malicious, snapping teeth. The French were happy, singing, strutting in their wacky way. Two middle-aged guys wearing blue berets and holding plastic baguettes. Giggly, tipsy. The Ecuadorians were rueful but proud, their World Cup done, a night in Rio to enjoy before heading home.

The next day, the U.S. and Germany slogged it out in the pouring rain of Recife. Not a great game but notable again for the determination of the Americans. And Jurgen Klinsmann, Team USA's usually intense, stony-faced coach, had provided a personal "get out of work free" letter so that fans in the U.S. could get off work to watch the match. Cute, that. In the spirit of things. And not, obviously, dwelling on fulminations about Suarez.

Meanwhile, Portugal and Ghana played out what was, in the end, something like an existential farce. But for a while there, the hopes of all three, Team USA, Portugal and Ghana, hung by a thread. And Belgium, perhaps bedevilled by lack of discipline, lost key defender Steven Defour to a red card in the match against South Korea. Ominous, perhaps.

There were 32 countries at the World Cup. Now there are 16. The World Cup unfolds, literally, here in the country of Brazil, but the tournament is its own country, a country of the mind. In it, the ball rolls, the world turns and deeds are done, accomplishments achieved and bitter failure faced. It's the game.

In Canada, we are saturated by coverage of English soccer and too many people tend to lionize English teams and their players. We swallow the hyperbole and overestimate England. While we do that, it's a fact that not everybody cares about Liverpool FC's predicament, as employer of Suarez. Not that many care here in Brazil.

The Chileans are still in the tens of thousands. The French will roar out La Marseillaise again with enough intensity to make your hair stand on end. The central narrative of this World Cup – Brazil's need to win it all here at home – is still intact and unfolding.

Saturnalia nights of summer-like bliss await us here in Brazil. Let's wish the demon-child Suarez a speedy return to whatever dimension he inhabits, close our ears to the ceaselessly yapping English press, and get on with it. A better World Cup awaits.

Kelly: FIFA ban will allow Luis Suarez to pass himself off as the victim
June 26, 2014 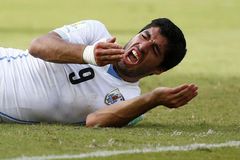 There’s no way around it – the Beautiful Game has become really ugly
June 25, 2014 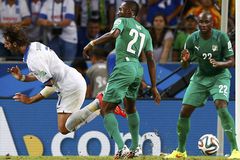 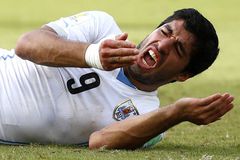 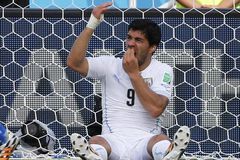