In the universal country of football, soccer or fussball, as they call it in Germany, greatness exists somewhere between fact and fiction. The World Cup final is, ostensibly, all fact and not fiction.

Yet we romanticize it, memory blurring the dull, cagey games of the past, recreating them as matches that lasted mere minutes, with flashes of attacking play, goals scored. We forget the acerbity of 2010 and near-brutality of the Netherlands attempting to stifle the flow of Spain's tika-taka style, with their kicking, hacking at everything in sight. We remember Spain's style triumphed, that's all.

From 2006, we remember when Zinedine Zidane head-butted Marco Materazzi of Italy, was sent off and the penalty kicks that ended it, but not the attacking play that marked the first half and the tremendous goalkeeping of Gianluigi Buffon. We recall it all in bits and pieces.

What will be remembered from this final is one goal. That's all there was, in the end, in a World Cup that produced so many. Mario Goetze's winning goal, long into overtime was, thankfully, worthy of being elevated from mere fact into mythology. It was beautifully taken, exhibiting a sublime piece of skill in control, pace and shooting.

It came too late to make this one a World Cup final for the ages. A game that started well, with Argentina intent on scoring and Germany looking far, far from the composed, fluid unit it had been just days ago. Wasted chances were Argentina's ruin. As so often happens with a final, the game itself seemed a wanton, reckless add-on to a tournament that was, in sum, greater than the closing finale.

Germany wins and deservedly so. Stout-hearted, clever, skilled and united. Not at its best, mind you.

A few days before it, after Germany dispatched Brazil with amazing ease, the superlatives were outlandish. Wolfgang Niersbach, the president of the German football federation, talked of seeing "football from another galaxy." There you go – drifting into fiction and fantasy.

But with some justification – before the final, Germany scored 17 goals in six matches, five more than any other team, at a rate of once every 34 minutes, double the average at this World Cup. It scored one goal for every 5.2 attempts.

And so the final against Argentina became conveniently tagged as, "the best team against the best player."

Messi alone versus the world's best unit. The burden of being the best, the key ammunition for Argentina, seemed to weaken and dispirit him during the six previous matches. He strolled the centre circle, in some games, looking disconsolate at times, incurious about the possibility of swift, sweeping runs, dribbling the ball past the opposition defenders.

He looked tired. Even Diego Maradona, speaking plainly for once, said as much about Messi before the final. "He will be the player who will define the game," Maradona said. "The only fear I have is that he is tired, but in the end, you cannot be tired."

Was he? Yes, and clearly so. His languor was, in the end, what defined the game more emphatically than German superiority.

Germany either attacks relentlessly or stifles the opposition. In this game, for a time, it seemed unsure of which plan was being implemented. At first, the Germans counterattacked at high speed, with their fullbacks such as Philipp Lahm, moving forward often. But Argentina was their equal in the first half, a unit formidably organized and only needing the spark from Messi that never came.

It was not a gripping game. Perhaps purists will dwell on how Messi was successfully closed down by Germany, while others will brood on the limpness if his performance.

Germany will see it as a great triumph, and it was that. But it was an accumulated greatness accrued through the earlier rounds. It was not a great one-game victory. It was a great goal, is all.

And so in the universal country of football, soccer or fussball, as they call it in Germany, a kind of greatness was achieved. A greatness is not somewhere between fact and fiction. The fact is, it was a great World Cup, a disappointing final game and one glorious goal made it matter.

In Germany, they can feel free to spin their fiction, and they deserve to, but those are the facts. 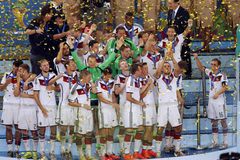 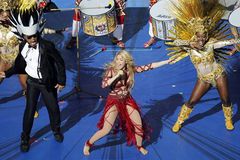 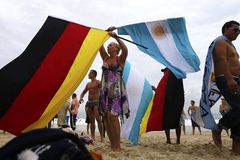 Kelly: Brazil, like England, is riding on history rather than talent
July 12, 2014 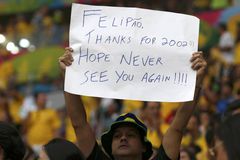