They came, they saw and they had fun.

The Americans, that is. Those crazy, braying, cheering supporters of the United States. There are a lot of them here. A lot. Before the World Cup started, FIFA confirmed that 200,000 tickets were sold in the U.S., making it second only to Brazil in the number of ticket holders.

Oh sure, some were affluent tourists, here for the fun and sun, the exotic vacation in Brazil with some soccer games thrown in. You can hear them in chic Rio bars, the American accents making ponderous pronouncements about this team or that.

But many, too, are hardcore, knowledgeable, often thoughtful about the game, tactics, players and formations. They didn't start following world soccer today or yesterday. They will be missed, now.

The team they support didn't conquer, but didn't disgrace. It progressed from the Group of Death and made it to the Round of 16. They have mettle, those U.S. players. Something that Portugal lacked and Ghana lacked, in the end.

All of the U.S. strengths and flaws were on display against Belgium. The side they faced was superior in skill and panache. This Belgium team has the cream of European youth, some of the most highly paid players at the top European teams.

For a time, especially in the second half, it looked like Belgium would run amok. They piled on the pressure – Marouane Fellaini, Dries Mertens, Eden Hazard and Kevin De Bruyne organized speedy, sweeping attacks that brought countless scoring chances.

On the one hand, you could say Belgium was wasteful, even lazy in failing to find the incisive finishing. On the other hand, you could say with some justification that the U.S. held them, harried them and stuck fast with aplomb. And it had some excellent chances carved out of nothing. The latter would be correct.

The U.S. took Belgium to extra time, and it took the introduction of superstars Romelu Lukaku and Kevin Mirallas to change the shape of the match. Mind you, by the second period of extra time, when it was a one-goal game, the U.S. had Belgium utterly terrorized. The game – Belgium won 2-1 – was thrilling from the first minute to the last.

Everything about the U.S.'s presence at a World Cup has to be put in context. Soccer is the world's game, but not America's. Now, the World Cup is when the world, usually resentful, gets to have a crush on the U.S.

There is a specific culture that surrounds a World Cup. The armies of supporters from various countries tend to mock clichés about their nation. Sensible, middle-aged Swiss men will mosey about with giant plastic Swiss cheese slices on their heads. The Spanish dress as matadors.

The Americans – Sam's Army, some call them – mimic typical American sports fans who know little about soccer. It's a kind of Stephen Colbert-style send-up. Heightened ridiculousness. To these U.S. fans, Netherlands is "Neverlands," Chile is "Chilly" and Germany – that is, Deutschland – is not something you can print in the newspaper.

Writing for Time magazine online the other day, Bill Saporito, one of the magazine's veteran editors, was pleased to note: "Office work is stopping dead in its tracks when the U.S. plays, just like it does in other countries when the World Cup is on." That's progress.

There is an endearing quality to the U.S.'s team attitude. Before the Belgium game, goalkeeper Tim Howard said: "We've been able to open some teams up. We're not world-beaters yet, but we're standing toe to toe with some big teams."

It's an interesting remark. Twenty years after the World Cup was held in the U.S., and largely ignored by the population, the U.S. is going toe to toe with the best, and the population is stopping to watch. It's the best kind of American progress. No need yet to be world conquerors, as the U.S. expects to be in everything else. That will come. Eventually. 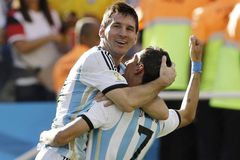