The great wheel of the world can keep turning. The stars have not fallen from the sky. The seas have not run dry.

Brazil is still in the World Cup.

But, boy that was close. A crossbar and an upright did it for Brazil, the team and the country. Not samba soccer, not the pace and prowess of the young star Neymar. Only outrageous fortune is keeping the party going.

Little wonder so many of Brazil's players were in tears, tormented by the agony of near-defeat when they spoke immediately afterwards. A penalty-kick shootout is what it came down to. And luck. Brazil is very lucky to still be in this World Cup. And as such it is exposed, the sinews of the home team exposed as shaky, insubstantial. A 1-1 tie with Chile that went to extra-time, then penalties and ended with the narrowest of misses by Chile.

The first match of the knockout Round of 16 was just what everyone hoped for - committed, passionate play from both sides and skillful on a level that made you think, "They can't keep doing it at this level." But they did. Utterly gripping drama minute by minute.

Chile, knocked out by Brazil at the same second-round stage in their last two World Cup appearances, in 1998 and 2010, were fierce in attack as well as defense. Not awed at all by the Brazil that turned up to play.

On 18 minutes David Luiz was lucky to see his header go into the net off Chile defender Gonzalo Jara. Fifteen minutes later Alexi Sanchez equalized for Chile. This looked like an epic in the making, and it was.

Inevitably it went from fabulous to frantic as the 90 minutes ticked down. Brazil's Neymar faded in the second half. Fewer dazzling speedy runs and, as soon he seemed to tire, Brazil looked less sure, more manic. More like fighters for a cause than a free-flowing, permanently accelerating team unit.

The added thirty minutes amounted to wasted chances. Brazil eventually put Chile under siege but it was frenzied stuff. On a rare break forward for Chile, substitute Mauricio Pinilla, a rare pair of fresh legs on the field, gave Brazil the country a national near heart-attack when he struck the crossbar with a blistering shot.

Then it all stopped. The penalty kicks that seemed imminent for some time, were obliged to unfold. A few kicks, one player against one keeper, the simplicity of that setting, was the stage on which Brazil's entire World Cup would be enacted.

Brazil had been held to 0-0 draw with Mexico thanks to an inspired performance from a goalkeeper. That set the country's nerves on edge. Could it happen again?

It was the most see-saw of penalty kick dramas. Some purists hate the game ending in this way. But this is the game at its most basic, elemental. And flawed – one awful miss by Chile, then a miss by Brazil. They were even, as they were throughout. And then it was the unlucky Gonzalo Jara, again, the man who had directed Luiz's header into the net, who failed to score the vital penalty. It hit the upright post.

Crazy-lucky and insanely-unlucky. That's the theme out of this one, Brazil is very, very lucky to still be in the tournament.

Many in the crowd in Belo Horizonte, and most of Brazil doing running commentary online seemed to feel that English referee Howard Webb was unfair, anti-Brazil. He wasn't. As he did when handling the World Cup final in 2010, between Spain and the Netherlands, he let the game flow, unwilling to allow it to stop and start endlessly

There had been some serious brooding here about Brazil's chances before this game. Realists knew that tinkering done by coach Luiz Felipe Scolari during the match with Cameroon – replacing Paulinho with Fernandinho in midfield - had made the national team, "the seleção" play more collectively, but there was luck too, and one man, Neymar, making the difference. Shaky values on which to progress.

It was the venerated pundit and former player Tostão, who was the most cautious: "After all, Brazil only topped the group on goal difference, and might have been facing the intimidating looking Netherlands. Instead up comes Chile. Brazil never lose to them, either at home or in World Cups. So easy, right? Maybe not. History recounts what has happened. Ahead, everything remains dark."

Correct. An outrageous stroke of luck is what mattered. It's unlikely to intervene again. 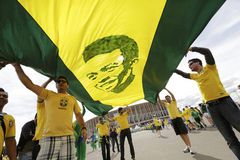 Brazilians confront race and inequality through the World Cup
June 27, 2014 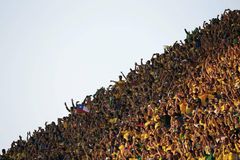