It was night. The street was dark. The cab seemed to be going in circles.

There were four of us, Canadian journalists, packed into it. Colleague Cathal Kelly, plus cohorts Morris and George.

The driver was in search of a restaurant recommended to us. Morris, sensing the driver's growing frustration, tried charm to calm him. Asked the driver if he had a girlfriend, was married maybe.

This the driver took as some general question about girls. The cab stopped suddenly and reversed rapidly. The driver pointed, triumphantly to a well-lit doorway. We stared out, then at the driver. He made gestures with his hands. We got the gist. Here, since we seemed to be interested, was a strip club. Brothel at the back.

In unison we went, "No!" The driver shrugged, kept driving around. The restaurant was closed anyway.

Oh, Brazil nights and days, at this World Cup.

Communication is an issue. One night, my cellphone rang. I jumped. More accurately, I leapt back from it. It was sitting on the desk in my hotel room in Sao Paulo at the time. It hadn't rung since I left Canada two days earlier.

I answered. A voice said, "Ah, I am speaking to Mister John Doyle?"

That was all he said, before an automatic recording from Claro, the Brazil cell service, told him and me, to quit it.

I'd heard that recording dozens of times. Every time I tried to call someone in Brazil or Canada. I was staying at Tryp Hotel so I ventured forth, midnight-ish to the front desk. Anyone try to call me? The four staff consulted and called somebody else. Nope, not them.

When you think of Brazil you think of some words on this list: Hot, samba, soccer, sexy, rhythm, rainforest, poverty, dangerous cities and beautiful beaches. I've seen some of it, and the things these words only touch on. I have impressions, as only a visitor for a soccer tournament can garner, on those days and nights that bracket the games, the business of being here.

Sao Paulo defeats me. Vast, sprawling, intimidating. Never have any sense of direction there. But I do have a sense of extravagant opulence and extreme poverty.

I arrived there via Miami, not as I was supposed to come here. A last-minute cancellation of a flight meant a change of plans. To get to Sao Paulo for the opening game, I had to leave hours earlier than expected. Literally stand up from the computer at home, shave, and head for the airport. Dazed I departed and dazed I arrived.

Stuck in the ceaseless traffic gridlock of Sao Paulo on the way to the hotel, I knew I was in a ritzy part of town. I gazed at a palatial condo building. The enormous, ornate gates to the parking garage rose slowly. What kind of car, I wondered, would emerge? A Maserati? A Rob Ford-type Escalade? I watched the gates go up, so slowly. And then a young woman on a bicycle emerged.

She was model-thin, the bike sleek and chic, her safety helmet designer-made and decorated. It was comical, the gap between my expectation and the reality, and then not. People are friendly here, and then not. At the airport, a woman at an information desk, fed up with arriving tourists trying to get their cellphones to work, shouted something rude and waved us all away.

There's a Brazilian TV soccer pundit I dislike. Me, and about twenty other journalists, mostly women, as it happens. Getting my press badge at the stadium media centre meant a long bus ride and a long lineup. Some twenty of us waited. Along came a local celeb. Gray-haired, handsome, middle-aged and pompous, he was, and everything stopped. He went first in line, and the staff, volunteers mostly, dropped everything to have their photos taken with him while the rest of us watched, waited, seething.

Day after day, one phrase stays in my head. I read it somewhere before I left: "Economically dynamic, socially Brazil stagnates." The word "stagnates" doesn't do it justice. Dropped off at a hotel after a game in Sao Paulo I wandered off in search of a cab. There's a brightly lit café. Crowded, people happy, chatting. The mistake is made in your head – nice area, safe to mosey, hail a taxi. Then there's a dark alley you didn't notice. Two men emerge, swaying. Behind them, a woman and child asleep on cardboard on the filthy ground. The men approach me, shouting. I walk away, back to the hotel's lights.

Then another hair-raising cab ride in the night. And later another one in Rio. That night I'm struck by the rampant adolescent carnality on the streets, in the cafes. Teenagers necking, canoodling everywhere. The allure of such late night adventures disappears after a week. The puzzle of Brazil stays. Communication is an issue, but only a city defeats me, not the country. 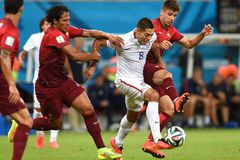 World Cup a magnet for fans across Latin America
June 22, 2014 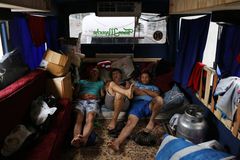 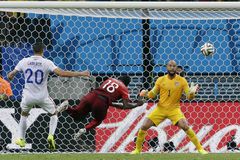